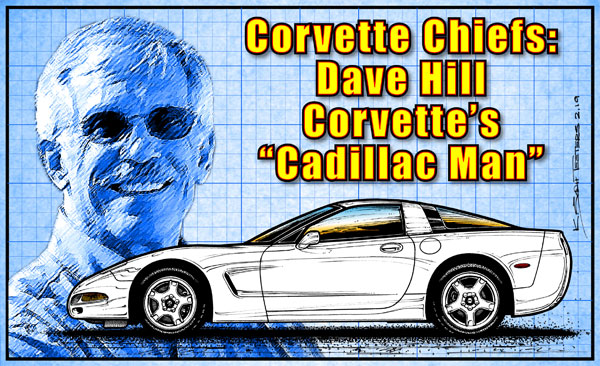 Dateline: 8-11-20 – This story was originally published in the now-defunct Vette magazine, August 2019 issue. Story, Illustrations & Graphics by K. Scott Teeters) On November 18, 1992 when it was announced that Cadillac Engineering Program Manager David C. “Dave” Hill would become the new Corvette Chief of Engineering, the Corvette community asked, “Why is a Cadillac man taking over the Corvette and what can he bring to the brand?” Hill was the right man for the job, at the right time, and he brought a lot!

In the early ‘90s GM was in financial trouble. The company had lost its way in the ‘80s and in 1989 when Jim Perkins came back from Toyota to become the general manager for Chevrolet, he said he didn’t recognize the place. Moral was low and infighting was rampant. To stop the financial hemorrhaging, every car line was being looked at, and once again, Corvette was on the chopping block. 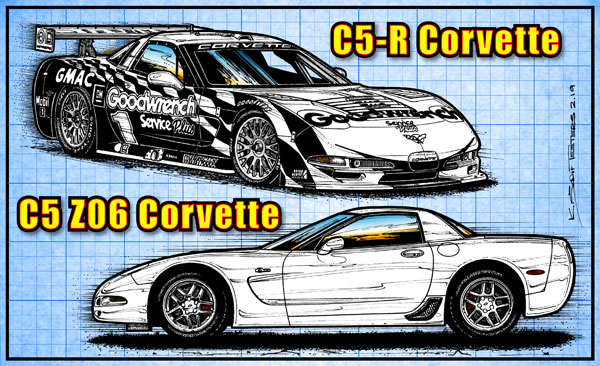 Thanks to Dave McLellan, the C5 was in the planning stage but only “on paper”. Perkins was Corvette’s “corporate angel”. He argued with GM brass that “Corvette” was one of the best-known automotive names in the world. He told them, “… if you don’t have enough confidence to trust my judgment that we can make money on this car, then I shouldn’t be here.” Perkins won the argument, but with McLellan ready to take early retirement, he needed a new Corvette chief with the know-how for profitability, performance, and quality.

Hill graduated in 1965 from Michigan Technology University with a degree in engineering and went right to work for Cadillac in their engine power development lab. From there, Hill worked his way through many departments. In 1970 he earned his Masters Degree in Engineering from the University of Michigan. Through the ‘70s and ‘80s at Cadillac, Hill was a Senior Project Engineer; Staff Project Engineer; Body and Chassis General Supervisor; Development, Emissions, and Transmission Staff Engineer; and Chief Engineer for the Allante, DeVille, and Concours models. In May 1992 Hill was promoted to Engineering Program Manager for Cadillac. Hill was deeply versed in GM’s premiere car line. 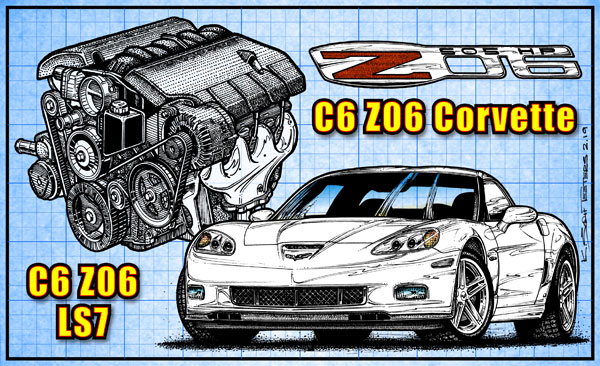 During Hill’s tenure, Cadillacs weren’t the performance cars they are today, but don’t conclude that Hill was into cushy Caddys; he was into sports cars and racing. Hill owned a 1948 MGTB, a 1970 350/350 Corvette Coupe, and from 1968 to 1972 he raced a Lotus Super 7 in SCCA competition.

The transition from the C4 to the C5 Corvette was the most radical of all generational transitions. Typically, when we think “radical,” we think “mid-engine”, “double-overhead-cam” or “turbocharging”. The C5 wasn’t any of that; it was better. In one fell swoop, the basic Corvette had the following; a hydro-formed perimeter frame with a wishbone backbone center spine, an all-new all-aluminum fuel-injected engine (the LS1), connecting the engine and new transaxle was a torque tube; the suspension and brakes were mostly aluminum, slim and lightweight; and an all-new slippery body and lush interior. The entire structure of the car was locked in together with each component designed as a stress-member and was designed to be a convertible. The design was so efficient it had over 1200 fewer parts. This was a Corvette like no previous model had ever been. It was the most radical Corvette to date and the basic structure concept is still used in the C7. The mid-engine C8 will be here soon and if Chevrolet decides to offer front and rear-engine configurations, a C9 will likely use the C5/C6/C7 concept, possibly in carbon fiber.

Sales of the 1997 Corvette didn’t look good, coming in at 9,752. It wasn’t that buyers didn’t like the new car, Corvette plant manager Wil Cooksey made sure that as cars were being built, all problems and process issues were solved and implemented. In 1998 the convertible was released and sales hit 31,084; the best since 1987. C5 sales never went below 30,000 and the best year was 2002 with 35,767; the best year since 1986. Customers were very happy with their C5s with its vastly improved structure that allowed the suspension to be calibrated like never before.

When the C5 was still on the drawing board, a “Billy Bob” strippo model was considered but not explored. Not long after the C5 was released, that concept was flushed out and the result was the ’99 Hardtop model. There wasn’t much of a savings as the Hardtop was only $394 less than the coupe. Sales only hit 4,031 in ’99 and 2,090 in ’00. But engineers learned something interesting. By bolting on and bonding the hardtop, the overall structure was 12-percent stiffer. This was that “something extra” that a performance model could use. The C5 Z06 was genius. With the more powerful 385-horsepower LS6, upgraded brakes, suspension, wheels and tires, a new Corvette legend was forged.

Hill had another ace up his sleeve that brought racing glory to Corvette and impacted the C6. In the fall of 1998, a factory-backed racing team was approved and the cars were christened, “C5-R”. Racecar builders Pratt & Miller were contracted to build the race cars. Hill used Pratt & Miller as his defacto racing engineering team. The Corvette Racing Team became world-class champions, won 1st and 2nd at Le Mans in 2001, 2002, and 2004, as well as every race in 2004!

By 1999 Hill’s engineers informed him that they had done everything they could with the C5 platform. To take the car to the next level, they would have to start the C6. While the C5 and C6 structure is similar, the C6 is all-new; with no important carryover parts. But what no one was expecting was that the Z06 would get a 100-horsepower bump, plus have an aluminum frame. No one was asking for this, but that’s what they got. The C6 Z06 was the most brutish Corvette ever offered.

Hill once said, “My favorite Corvette is the next one.” Mr. Cadillac insisted on three key things; state of the art performance and technology; passionate design; and tremendous value. In an interview with c6registry.com, Hill said, “Being involved with Corvette brings out the best in all of us who have the privilege of working on it. It represents the best that GM has to offer; along with the best America has to offer. The Corvette is very personal. We’re not talking about transportation here; we’re talking about a product that changes someone’s lifestyle, and that causes us to be enthusiastic about our duty.” Hill retired on January 1, 2006, and was inducted into the National Corvette Museum’s Hall of Fame in 2006. – Scott