Dave MacDonald was one of the young lions of Southern California sports car racing. He was a natural and quickly earned the nickname, “Master of the Oversteer.” Dave and his racing partner Jim Simpson started racing in 1960 and in their first year won 3 out of 15 races and never finished lower than 4th. In his second year Dave racked up 15 wins and three 2nd place finishes in 24 races and was on his way to being a dominant force. But like all racers, Dave and Jim wanted to move up into something faster. It was Carroll Shelby who suggested the guys get a Max Balchowsky chassis and build a purpose-built car. (Be sure to check out the video of this car. Click the “Continue reading” link) 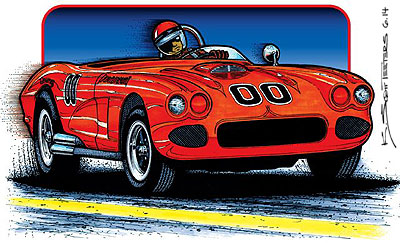 Balchowsky was the go-to guy in southern California for exotic road race cars. Max and his wife, Ida, knew how to custom build tube frame chassis, plus which off-the-shelf parts worked the best for racing. A Balchowsky car parts-list looked like a buffet menu. Simpson paid $4,500 for the chassis and Dave and Jim finished the car. The guys were “Corvette men” so the engine choice and body was obvious. A new ’62 327 Fuelie with header side-pipes powered the car and Dave and Jim handmade the ’61 Corvette body. Both worked at Don Steves Chevrolet – Dave, the head mechanic, and Jim, a lead salesman. Jim borrowed a new ’61 Corvette for a weekend to make molds from to make the custom body. The body was chopped and shaped to fit the chassis that was 17 inches shorter than a stock Vette.

Shelby wasn’t the only important person watching MacDonald’s career, Duntov was closely following Dave’s impressive career. When Zora learned what Dave and Jim were up to, he paid MacDonald a visit. Dave’s younger brother Doug was home the day Duntov visited and recalls that Duntov was nearly impossible to understand because of his thick accent, but Dave understood Zora perfectly. This may have been the inspiration for Duntov’s Grand Sport.

The ’61 Corvette Special was completed in October 1961 and weighed only 1,750 pounds. The 327 Fuelie made around 350 horsepower, for a 5:1 power-to-weight ratio— perfect for an advanced road racer. Balchowsky liked to build and set up his chassis “loose,” and Dave described his first ride as “unnerving.” While the guys were building the car at Dave’s home garage, they were still racing their Don Steves Chevrolet-sponsored ’61 Corvette. By the end of the season, the Special was dialed in and ready to start the 1962 season. Dave and Jim took 1st place the first three races of the season. But Dave and Jim determined that they stood a better chance of a championship if they raced the production-based Corvette. The Special was parked and they raced the production Corvette to the B/Production championship. MacDonald only drove the Special two more times: May 27 at Santa Barbara and September 23 at the Reno Grand Prix. The car showed excellent potential, but was never fully developed. Plus, the timing wasn’t right. 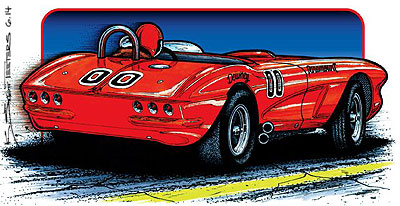 In June 1962 Dave was invited by Duntov to come to the GM proving grounds to testdrive the new ’63 Sting Ray, along with Dr. Dick Thompson. The actual testing was June 30 to July 2. Then in September, Dave and his wife, Sherry, along with Bob Bondurant and Jerry Grant were invited by Duntov to fly to St. Louis and drive the new Z06 optioned Corvettes back to California to be prepared for racing. In early 1963, Dave was offered a golden opportunity to professionally drive Cobras for Shelby.

What became of the ’61 Special? The car was sold to a racer from Hawaii and raced a few times. Dave drove the car the last time in September at the 1962 Reno Grand Prix. Story has it that the owner took the car back to Hawaii where it sat in a salvage yard next to Pearl Harbor and rusted into the ground. MacDonald was tragically killed, along with Eddie Sachs, at the ’64 Indy 500. In August 2014, Dave MacDonald was inducted into the National Corvette Museum’s Hall of Fame. – Scott 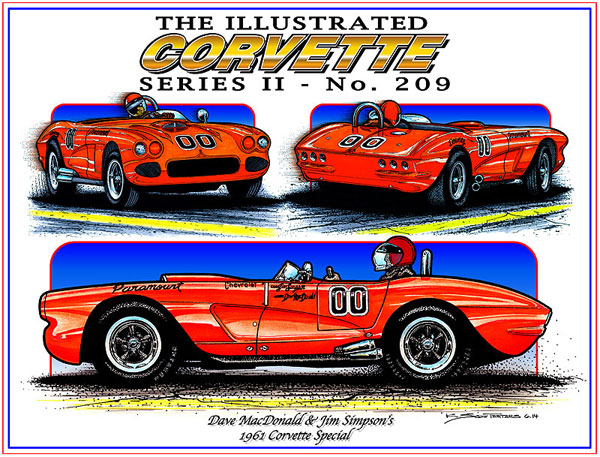