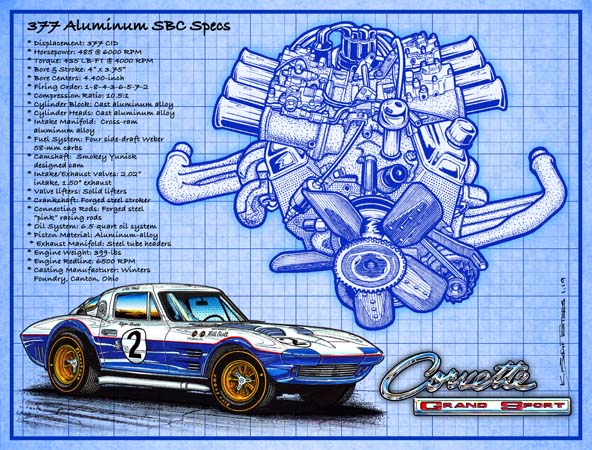 Dateline: 5-7-21, This story by K. Scott Teeters was first published in the October 2019 issue of VETTE magazine – In the early 1960s, an aluminum performance engine was as exotic as fuel injection, independent suspension, and four-wheel disc brakes. The first mention of an all-aluminum engine for a Corvette was in Zora Arkus-Duntov’s proposal outline for the Q-Corvette in 1957. Ed Cole was Chevrolet chief engineer from 1952 to 1956 and was the lead engineer in the design and development of the small-block Chevy.

Cole was a mechanical engineering visionary. After he became Chevrolet’s general manager in 1956, Cole announced his 1960 Q-Chevrolet concept that would put a transaxle into every car to improve traction and handling and eliminate the transmission hump that would open up the interior. Cole’s plan included the Corvette. 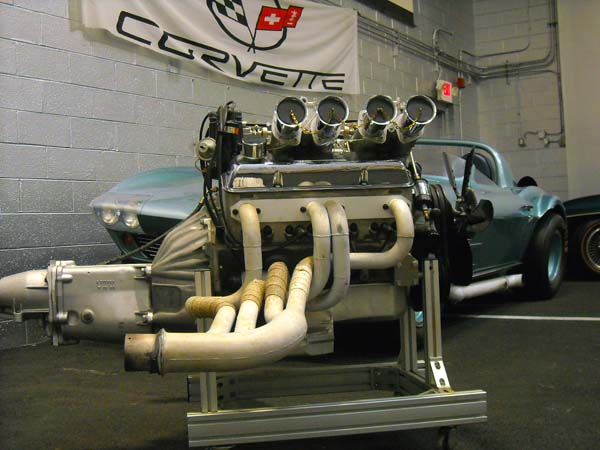 Even before going to work for Chevrolet, all Duntov wanted to do was to build racecars. Based on his racing knowledge, Duntov’s Q-Corvette was spectacular and included; a four-speed transaxle, four-wheel independent suspension, four-wheel disc brakes, and an all-aluminum fuel injected 283 engine. Duntov is usually credited with the all-aluminum small-block Chevy, a deeper look tells a slightly different beginning. 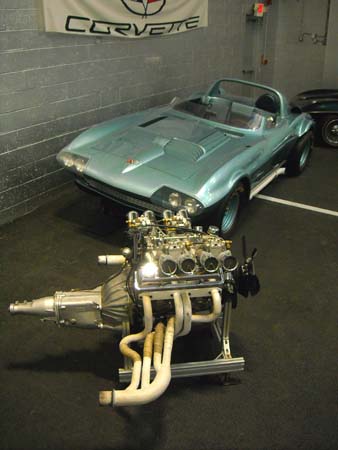 The design parameters of Cole’s SBC were that the engine should be; small, lightweight, simple, and inexpensive. Cole reasoned that an aluminum version of the SBC using a new aluminum-silicone alloy would be obviously lighter and probably less expensive to make. To keep costs down, there would be no valve seat inserts, no pressed-in valve guide inserts, or cylinder liners. But sometimes a simple idea turns out to not be so simple. 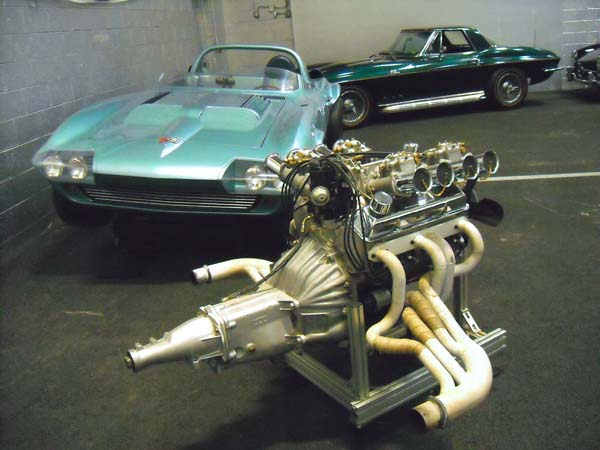 Problems started right from the beginning. The complex molds used sand cores and the completed castings required extensive machining. Sand-cast aluminum is high in porosity and low in density. During machining, cavities would open up in the castings, causing a high rejection rate, which drove up the cost.

Aluminum pistons on aluminum bores were hard to lubricate and would scuff the bores. Between the strength of materials and the casting challenges, pouring aluminum into molds designed for cast iron wasn’t going to work for mass production.

A few aluminum engines were completed. Duntov installed one in his CERV-I car in 1959, but the valves would freeze to the guides when the temperature went low. Mickey Thompson got an aluminum engine for an Indy car project and bored the cylinders to installed steel sleeves to reduce the C.I.D. to the Indy limit of 255-C.I.D.

Roger Penske had TRACO modestly build an aluminum SBC to just 300-horsepower for his Cooper Monaco. When TRACO was done, the engine weighed just 350-pounds; the lightest of all the aluminum SBCs.

The original SBC was never designed to be cast in aluminum. So when exact copies were cast in aluminum, the basic weaknesses of the original design were obvious. In 1960 some Corvette brochures offered 275 and 315-horsepower fuel injection engines with aluminum heads but were canceled early in production due to breakage. Briggs Cunningham was to be given several sets of aluminum heads for his Corvette Le Mans assault, but none were installed. 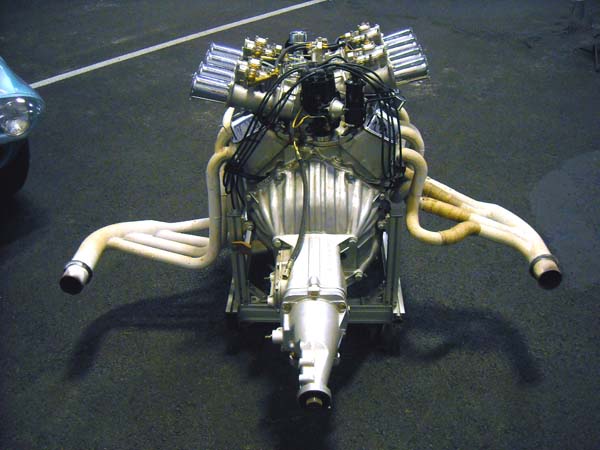 When Duntov started planning his Lightweight Sting Rays in early 1962 to battle Shelby’s Cobras, the SBC had 327-cubic-inches. Duntov insisted on an all-aluminum 327, reasoning that the heavy-duty parts from the L84 Fuelie would be more than enough for his racing engine. Unlike the previous aluminum engines, steel cylinder liners were pressed into the block. After each block was machined, it was water-tested for leaks. If leaks couldn’t be fixed with welding they were scrapped. 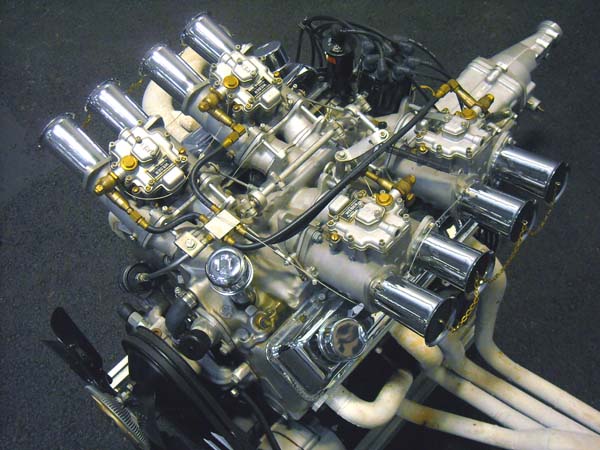 The most significant change to the basic block was that the main bearing webs were thicker and four-bolt main bearing caps were used. The earlier aluminum SBCs were not delivering any significant power increases, so it was decided that more cubic inches were needed. A 4.00-inch stroke yielded 402-cubic-inches. However, experimentation showed that the engine was happier with a 3.75-inch stroke that yielded 377-cubic-inches. Notches had to be made into the insides of the block for connecting rod clearance.

Numerous cylinder head designs were considered. The wildest was a hemi head design with two spark plugs per cylinder. The hemispherical combustion chamber allowed for larger 2.20-inch intake and 1.72 exhaust valves. The intake system was a Rochester constant-flow fuel-injection unit. This was Duntov’s preferred engine for his Lightweight but never was developed or tested. Engineers expected 600-horsepower from the 402-cubic-inch configuration. 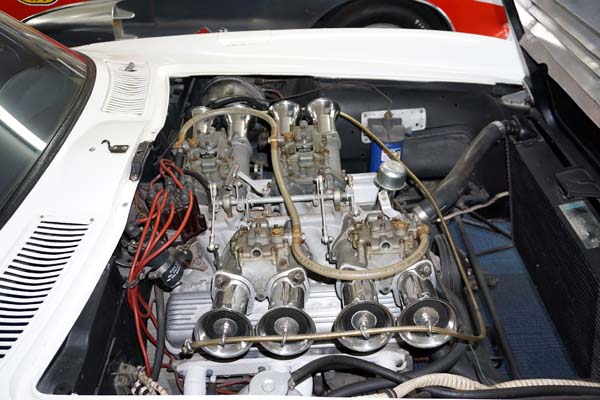 The Mark II big-block with its unique “porcupine” semi-hemi heads was in development, so engineers designed and cast similar sets of aluminum heads for the SBC. Initial tests showed that they did not flow as well as the standard wedge combustion chamber heads, so the concept was dropped. If the heads had been developed they could have been a game-changer and made it into production cars.

Twelve aluminum 377 blocks were successfully machined and designated “A” to “L”. When John Mecum took delivery of three Grand Sport Corvettes as part of his Nassau invasion, the cars had aluminum 377s with four 58-mm Webers. After the Grand Sports stomped the Cobras at Nassau, the cars were bought and sold at a brisk pace. 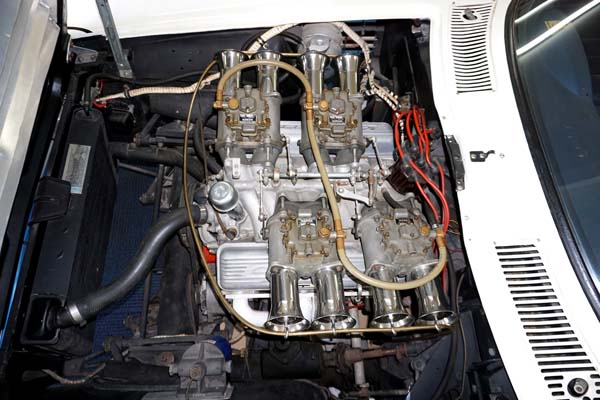 Engineers learned that the aluminum 377s were good for short races, such as Nassau, but not durable for long races, such as Sebring. When Penske raced Grand Sport #005 at Sebring in 1964, his car was powered by a steel version of the 377 and performed very well. 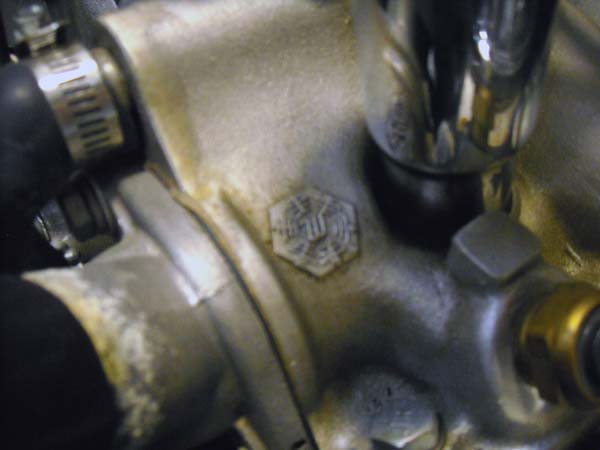 Several of the engines were sent to Jim Hall and installed into his Chaparrals. Hall was instructed to install the engines and not to change anything except for timing and settings for the Webers. The engines were plugged in, raced, and returned to Chevrolet for evaluation.

As the engines were raced, eventually nearly everything either failed or upon examination was soon to fail. For instance, when one engine threw a rod, engineers used a new process for making rods called, Vacuum-Induction Melt steel to insure no impurities in the raw forging. When bolts were magnafluxed and showed signs of stress, all bolts were then over-designed. Rocker-arm lube was another issue and there were electrical problems with the early-transistorized regulators and ignition amplifiers.

Exhaust headers were showing signs of cracking at the ports due to metallurgical problems. This was fixed by using a different welding process. Camshaft gears were failing when dry-sump oil systems were installed. Excessive stress and wear on the camshaft drive gear caused the distributor to retard the timing; causing a drop-off in power.

The perceived advantage of the all-aluminum SBC was weight; the complete engine weighed 150-pounds less than a cast iron version, however, the aluminum engines didn’t make quite as much power. Because durability was such a serious issue, in the early years, development work went into durability. 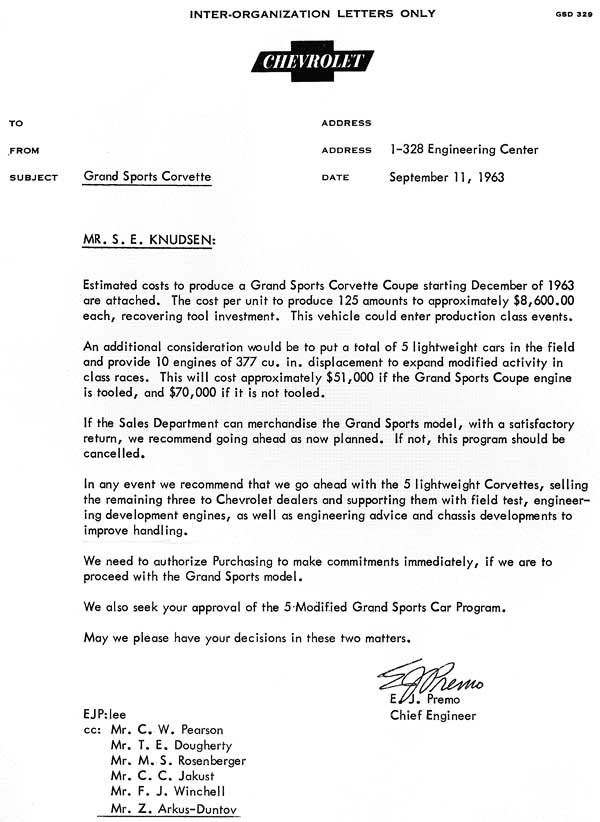 Eventually, the aluminum SBC reached optimum development, priced itself out of racing, and didn’t contribute any parts that went into production engines. Close to the end, there was talk of an overhead-cam kit for the SBC, but no action was taken. The amount of money spent on the program was an accounting nightmare for sure. At best, all the problem-solving saved years of development time for the all-aluminum Can-Am block and the ZL1. In a sense, the all-aluminum SBC was a prehistoric ZL1, domed by the basic “bread and butter” design of the original SBC. – Scott

Reproductions of this post’s lead illustration of the All-Aluminum 377 Small-Block Chevy and the Grand Sport #005 are available as 11″ x 17″ prints, signed and numbered by the artist, CLICK HERE! 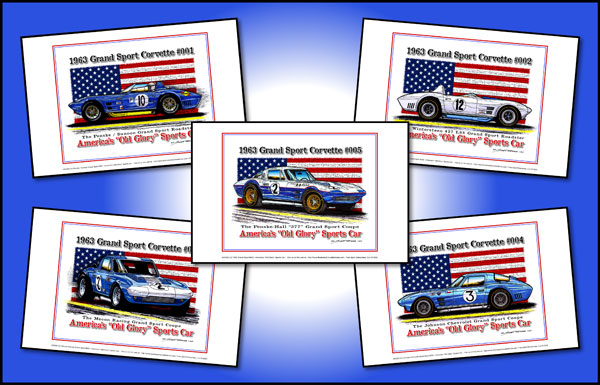