The Return of the Grand Sport & Boutique Corvettes”

The Grand Sport option is available in all colors, enabling customers to personalize their ride.

In retrospect, ‘09 can be best summed up with a Charles Dickens quote from his classic book, A Tale of Two Cities, “It was the best of times, it was the worst of times.” 2009 should have been an awesome year for Corvettes. But it turned out to be the worst sales year since ’61. Sales went from 35,310 units in ‘08 to just 13,934 for ’09 – a 60-percent drop! Of course, this lead to a lot of internet speculation that the bottom has dropped out of the sports car market, because nearly all sports car marquees saw sales plummet. So, people don’t want sports cars, now? Hardly. It’s the economy, stupid!

The ‘09 Corvette line couldn’t have been much better. The ZR1 was finally in production, the Z06 was still one tick away from race car status, and the base Corvette was still packing 430-hp under the hood. Plus, there were two spectacular special edition Corvettes available; the GT1 Championship Edition and the Competition Sport. And if that wasn’t enough, from April ‘09 through the Summer, car magazines were all over the upcoming ’10 Grand Sport. Chevrolet could not have had better press coverage to whip up interest in Corvettes.

Introduced in ’09, the 638-HP ZR1 is likely to remain the baddest Corvette for a very long time.

On the other side, there was a nonstop flow of grim news about GM. CEO Rick Wagoner was out, and Fritz Henderson was in. Then Fritz quit and now Ed Whitacre is in. Plus, the SS Camaro was finally available, that probably drained some sales away from the Corvette. Even the drop-dead gorgeous special editions didn’t generate projected sales. The GT1 Championship Edition was supposed to have a 600-car run, but only 125 units were built, and the Competition Sport package generated just 72 sales.

So, where to from here? For ‘10 there have been no announced special edition Corvettes, and it’s highly unlikely that there will be any. In mid-’09 there was a lot of net chatter about the C7, but plans for a C6 replacement have been postponed, indefinitely. All of this has nothing what-so-ever to do with the quality of the car. The ‘10 model, just like the ’09 is awesome – truly, the best Vette yet. Actually, for those that are in the market for a ‘10 model, some retailers are discounting base and Grand Sport Corvettes as much as $5,000! And the selection of accessory options is terrific. You can create your own personalized Vette right from your dealer’s showroom floor.

The Z06 is just a few ticks behind it’s ZR1 big brother.

What’s “new” for ‘10? Not much, but as usual, the car just keeps getting better. New standard items include, Launch Control, revised controls for the paddle-shift 6-speed automatic, standard side airbags, and interior console trim in either Orbit or Gunmetal patterns. Convertibles now get the taller Z06 rear spoiler. Torch Red paint is back, Z06 cars can opt for the Cashmere interior, and the 3LZ Equipment Group now includes power sport seats and a power passenger seat. Also, Crossed-Flags seat embroidery is a new option. There are no significant changes under the hood, in the driveline, or suspension. Consequently, ’10 Corvettes are still the same awesome performers they were in ‘09.

What an odd situation for GM’s performance flagship car. The Corvette is truly a GT car. In 58-years of production, the Corvette has never been faster, quicker, handled better, with more custom accessories than ever imagined. All buffed up, with hardly anyone willing to buy. But if your personal financial situation has been unaffected in this economic downturn, now is THE time to get the Vette of your dreams. – KST

PS – 11×17 Parchment Paper prints and Laser-Etched prints of the 2010 Corvettes are available HERE.Or, just click any of the below images. 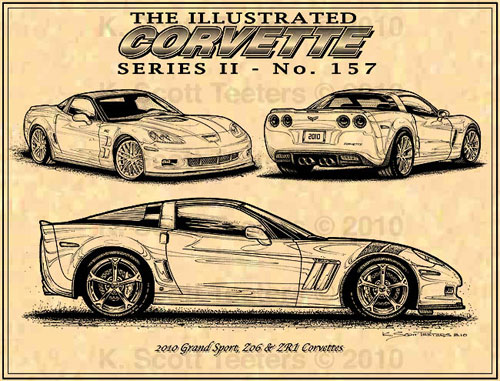 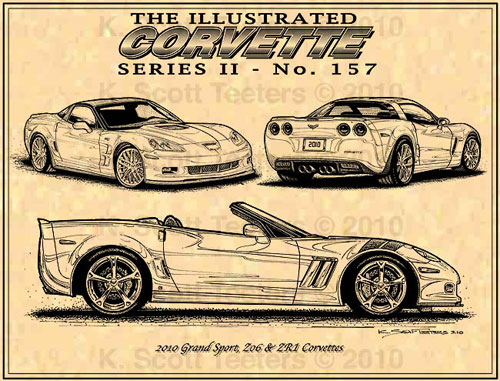 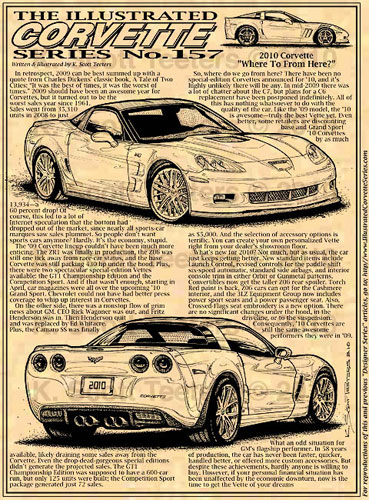 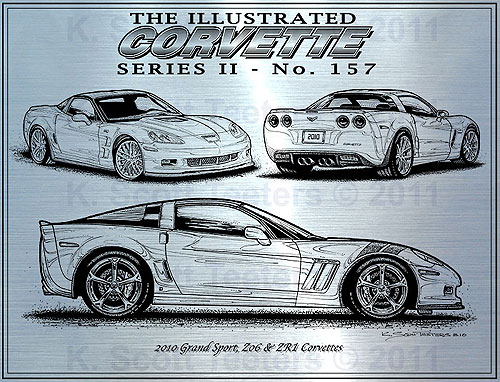 And for something TOTALLY UNIQUE, Laser-Etched Illustrated Corvette Series-II No. 157 2010 Corvette (Coupe featured). Our Laser-Etched on metalized Mylar are $49.95 + $8.00 S&H.

11×17  Laser-Etched prints of the 2010 Corvettes are available HERE.Or, just click any of the below images. 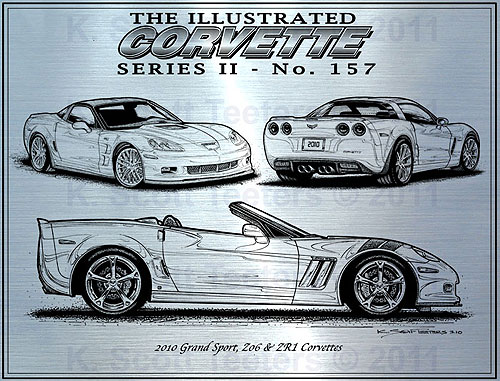