Three and one half months before the 1953 GM Motorama at the Waldorf Astoria, GM officially begins to use the word “Corvette” for its new 2-seater sports car. – Videos

Timeline: 9.27.15 – Last month we told you about Chevrolet PR-man Myron “Scotty” Scott’s induction into the National Corvette Museum’s Hall of Fame. Mr. Scott was the man responsible for coming up with the name “Corvette” for Harley Earl’s “American sports car” show car concept. The working name for the two-seater had been “Opel.” How uninspiring! (Hey Man! Did you see the new Op?”) Over 300 names were rejected before Myron Scott found the word, “Corvette” in the dictionary. I wonder if a copy of that list is still around.

“By the books” the American flag, in its entirety, is not supposed to be used for anything but the American flag, and thus cannot be used as part of a logo or trademark. This “rule of the flag” is pretty much ignored these days, but back in 1952, GM’s lawyers nixed Harley Earl’s first Corvette logo design because Earl wanted to use the American flag. (How cool would that have been?!) Instead, Mr. Earl metaphorically used a “red flag” and emblazoned the same fleur-de-lis design he used on the very first car he designed for GM in 1927, the Cadillac La Salle. 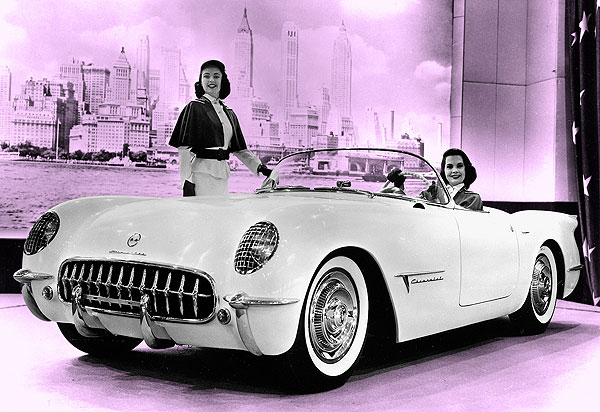 “Fleur-de-lis” is a French word that means “flower – lily.” It has been used by the Frankish to French monarchy on various crests, as well as being used in artistic, architectural, military, sports, education, Scouting and even business and car logos, The crossed-flags design has worked ever since, and by January 1953 when the Corvette made it grand debut at the 1953 GM Motorama, the new Chevrolet Corvette was wearing crossed flags, and has never stopped. – Scott

Have a look-see at our C1 die cast Corvette models, HERE.