Dateline: 7.19.15  Little did Joel Rosen and Marty Schorr know back in 1967 when they started their Baldwin-Motion Phase III Supercars experiences that almost 50 years later the cars they offered would become SO valuable! Lots of Phase III Motion cars were built and only Joel knows for sure the exact number. However, Rosen’s real passion was for the Phase III Corvettes, and more specifically, his “Shark” Corvettes.
John Silva created a Mako Shark-styled body kit for the then new C3 Corvettes that were marketed under the name “Maco Shark Corvettes.” Rosen worked a deal with Silva to make his own Maco body kits and sell either the body parts, through his Motion Performance catalog, or complete, custom ordered, turn-key Maco Shark Corvettes. Three basic versions were made: the “regular” Maco Shark, the Manta Ray, and the Morey Eel. 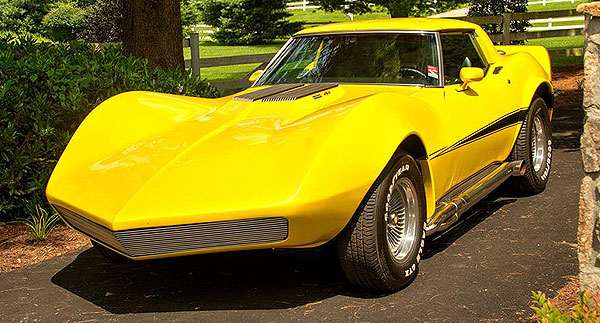 PS – I have covered all of the Motion Performance Corvettes in my Vette Magazine “Illustrated Corvette Series” monthly column. I covered the Morey Eel in ICS No. 156. The art and story are below, and all of my Baldwin Motion art prints are available from our safe and secure Amazon.com store, HERE! 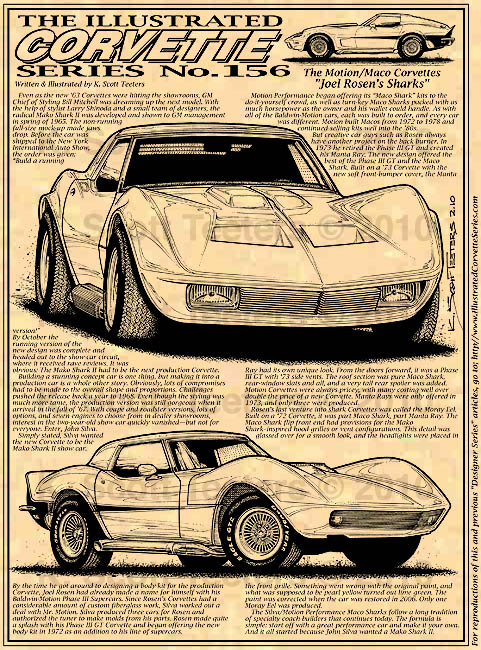 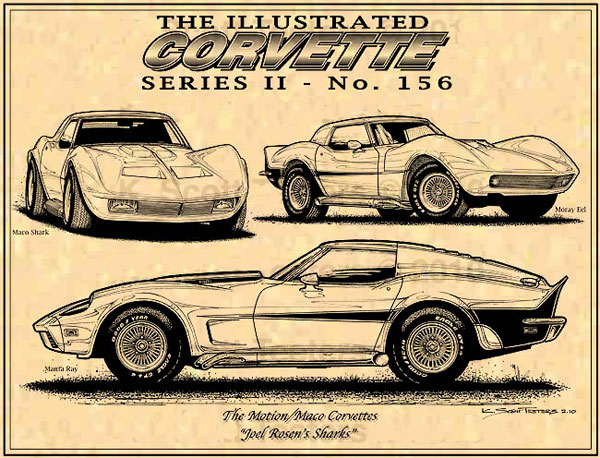 Even as the new ‘63 Corvettes were hitting the showrooms, GM Chief of Styling Bill Mitchell was dreaming up the next model. With the help of stylist Larry Shinoda and a small team of designers, the radical Mako Shark II was developed and shown to GM management in spring of 1965. The non-running full-size mock-up made jaws drop. Before the car was shipped to the New York International Auto Show, the order was given: “Build a running version!”

By October the running version of the new design was complete and headed out to the show-car circuit, where it received rave reviews. It was obvious: The Mako Shark II had to be the next production Corvette. Building a stunning concept car is one thing, but making it into a production car is a whole other story. Obviously, lots of compromises had to be made to the overall shape and proportions. Challenges pushed the release back a year to 1968. Even though the styling was much more tame, the production version was still gorgeous when it arrived in the fall of ’67. With coupe and roadster versions, lots of options, and seven engines to choose from in dealer showrooms, interest in the two-year-old show car quickly vanished—but not for everyone. Enter, John Silva.

Simply stated, Silva wanted the new Corvette to be the Mako Shark II show car. By the time he got around to designing a body kit for the production Corvette, Joel Rosen had already made a name for himself with his Baldwin-Motion Phase III Supercars. Since Rosen’s Corvettes had a considerable amount of custom fiberglass work, Silva worked out a deal with Mr. Motion. Silva produced three cars for Rosen and authorized the tuner to make molds from his parts. Rosen made quite a splash with his Phase III GT Corvette and began offering the new body kit in 1972 as an addition to his line of supercars.

Motion Performance began offering its “Maco Shark” kits to the do-it-yourself crowd, as well as turn-key Maco Sharks packed with as much horsepower as the owner and his wallet could handle. As with all of the Baldwin-Motion cars, each was built to order, and every car was different. Motion built Macos from 1972 to 1978 and continued selling kits well into the ’80s.

But creative car guys such as Rosen always have another project on the back burner. In 1973 he retired the Phase III GT and created his Manta Ray Corvette. The new design offered the best of the Phase III GT and the Maco Shark Corvette. Built on a ’73 Corvette with the new soft front-bumper cover, the Manta Ray had its own unique look. From the doors forward, it was a Phase III GT with ‘73 side vents. The roof section was pure Maco Shark, rear-window slats and all, and a very tall rear spoiler was added. Motion Corvettes were always pricey, with many costing well over double the price of a new Corvette. Manta Rays were only offered in 1973, and only three were produced.

Rosen’s last venture into shark Corvettes was called the Moray Eel Corvette. Built on a ‘72 Corvette, it was part Maco Shark, part Manta Ray. The Maco Shark flip front end had provisions for the Mako Shark–inspired hood grilles or vent configurations. This detail was glassed over for a smooth look, and the headlights were placed in the front grille. Something went wrong with the original paint, and what was supposed to be pearl yellow turned out lime green. The paint was corrected when the car was restored in 2006. Only one Moray Eel was produced.

The Silva/Motion Performance Maco Sharks follow a long tradition of specialty coach builders that continues today. The formula is simple: start off with a great performance car and make it your own. And it all started because John Silva wanted a Mako Shark II. – ST