The BIG Return of the Grand Sport

Dateline: 1.17.17 – The long-view story of the Grand Sport now has four chapters. The first chapter told the story of Zora Arkus-Duntov’s vision of offering to the public, lightweight, powerful, all-out racing cars that “could” be driven on the street – not unlike what Ferrari was offering – available through Chevrolet dealerships. It was a great idea, but went over like a belch in church with GM’s brass. The plug was pulled immediately and the five pilot Grand Sports were left to go fallow with no factory development or backing.

Part Two of the story happens 33 years later, in 1996. By this time, unless you seriously followed the early days of Corvette racing, you probably never heard of a “Grand Sport.” But for those that knew, what’a delight it was when Chevrolet announced that there would be two special edition Corvettes for the final year of the C4. The Collector Edition, with its Sebring Silver paint, ZR1-style wheels and subtle trim was an elegant machine, especially when optioned with the final iteration of the classic small-block Chevy engine, the GEN II LT4. But the hottie for 1996 was the limited edition (only 1,000 units) Grand Sport.

Assistant chief Corvette engineer and racer, John Heinricy was the driving force behind the C4 Grand Sport. Painted in brilliant Admiral Blue and trimmed with a bold white stripe that ran from the nose to the tail, and black ZR-1 5-spoke wheels, and the LT4 engine, the Grand Sport was the “to die for” Corvette for 1996. The overall look has become iconic and has been applied to every generation Corvette. Major Corvette shows often have a “Grand Sport Corral” where all the C4 Grand Sports and their owners gather together – it’s really quite a sight.

But a funny thing happened after 1996. The C5 platform was so good that when the Z06 arrived, no one was thinking about a C5 Grand Sport. The window of opportunity would have been 2004, the last year for the C5. But instead, the big special edition Corvette was the Commemorative Edition (available on all model 2004 Corvettes) as a salute to the success of the C5-R racers. But still, no one was looking for a Grand Sport Corvette – the Z06 was plenty, and then some! 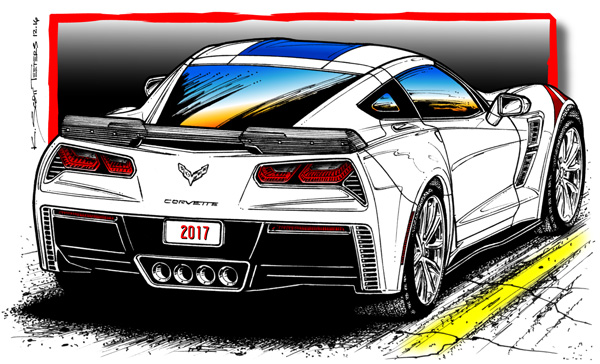 Part Three of the Grand Sport Story seemed to arrive out of the blue in 2010. The C6 Z06 was a thunderous advance over the base C6 with its aluminum frame (another goodie no one was expecting) and the 505-horsepower LS7 engine. Many a Corvette buyer got more Corvette than they bargained for with the Z06. That’s why it was so shocking when the supercharged, 638-horsepower ZR1 arrived. “Oh NO! More power?!?” So, while heads were still spinning over the 205-mph ZR1, Chevrolet released the 2010 Grand Sport. This car set the new Grand Sport formula: Take the racecar-engineered performance parts from the Z06, plus the aggressive wide-body and apply it to the base model Corvette.

The C6 Grand Sport formula turned out to be pure genius. Despite a terrible economy and the loud chatter of the C7, after all the numbers were crunched, the 2010-to-2013 Grand Sports took the lion’s share of Corvette sales. The basic C6 was a great-looking car, but the Z06 wide-body looked like the matured, grown-up Corvette, with its broad shoulders, scoops, spoilers, and fat tires. Aesthetically, what’s there to not like about the C6 Z06? The C6 Grand Sport gave buyers the Z06’s muscular good looks without the beastly behavior of the Z06. The C6 Grand Sport was available as a coupe or roadster (the C6 Z06 was coupe-only), all Corvette options were available, all colors, plus a staggering array of custom options. Buying a new Corvette was now a boutique experience.

Some are describing the new Grand Sport as a “Z06 with a Stingray engine.” Chief engineer Tadge Juechter explained that the Grand Sport package is not simply a “plug’n play” with Z06 parts. While the Z06 parts work great on the new Grand Sport, the basic Stingray is unique and everything had to be calibrated. The Grand Sport has its own springs, anti-roll bars, Magnetic Ride Control, and Electronically-controlled rear differential programming. The Z06 wide-body offers plenty of extra venting and opens up the fenders for the extra-wide wheels and tires. The wheels are 19-inch on the front and 20-inch on the rear, instead of 18-inch and 19-inch diameter wheels on the base Stingray. The extra large wheels are shod with Michelin Pilot Super Sport tires – 285/30ZR-19 on the front and 335/25ZR-20 on the rear. The front brakes are 15.5-inch vented rotors with 6-piston sliding calipers and 15.3-inch vented rotors with 4-piston sliding calipers on the rear. Steering is variable assist, 12.0-16:4:1 ratio and dampers are Magnetorheological.

While the Z06 wide-body is only 3.5-inches wider than a stock Stingray, the fender bulges give the car a real Charles Atlas, broad shoulder, tough guy look. Weighing in at 3,452-pounds you’d expect to hear some grump’n that the car should be lighter. Won’t happen! The wider stance, wider tires, and calibrated suspension allows the Grand Sport to use more of its 460-horsepower than the Z51. It is as if the weight doesn’t matter!

If all of that isn’t enough and you’re looking for more performance, the Z06’s optional Z07 package is available that will take your Grand Sport experience to the max. The $7,995 Z07 package includes, Michelin Pilot Sport Cup 2 tires (almost street slicks) carbon-ceramic brakes over Brembos, and the Stage 2 Aero Package (an additional $4,995) that includes a more aggressive front splitter, side skirts, and the Z06 rear spoiler. The Z06’s Stage 3 rear wickerbill spoiler was deemed too aggressive for the 460-hp Grand Sport.

Let’s talk price. The Stingray is already a premium automobile and the price of performance exclusivity has never been at Dollar Tree levels. But considering what you can get for the price, the Grand Sport is arguably Chevrolet’s greatest performance value. If you want to have some serious “what if” fun, go to, http://www.chevrolet.com/corvette-grand-sport/build-your-own.html#/config <http://www.chevrolet.com/corvette-grand-sport/build-your-own.html#/config> . Here you can play for hours with different combos of options, colors, wheel styles, interior colors, and strip packages. If you can resist temptation, you can build a Grand Sport Coupe for as little as $65,450. If you need the Z07 package your Grand Sport will cost $74,440.

Since the Grand Sport and Z06 look so much alike, the entry level Z06 starts at $80,395. Add on the Z07 Performance Package (the Carbon Flash-painted Carbon Fiber Ground Effects Package is a mandatory part of the Z07) and your performance maxed-out Z06 adds up to $90,390 – that’s $15,950 more than the Grand Sport. Now just for grins, adding every creature comfort, performance, and bragging rights option I could work into my fantasy Grand Sport Coupe, I was able to rack on up to $107,715! I was able to max out a Z06 Coupe to a whopping $122,380!

From 2010 to 2013 Corvette customers proved with their wallets that they didn’t mind paying a slight premium for a C6 Grand Sport because the performance and aesthetic perceived value was so high. Will lightning strike again with the C7 Grand Sport? I’d say the odds are excellent! – Scott