Car and Driver dishes the C7 ZR1 with “25 Cars Worth Waiting For” cover story!

Dateline: 3-9-17 – I just love paper car magazines! Subscriptions are dirt cheap and once a month your letter carrier delivers a bundle of paper for you to feast your eyes upon and consume delightful automotive stories. For Corvette lovers, its a thrill when one of Chevrolet’s “Plastic Fantastic” Corvettes adorns the cover. The April 2017 issue of Car and Driver arrived yesterday in my mailbox and it was a WOW! 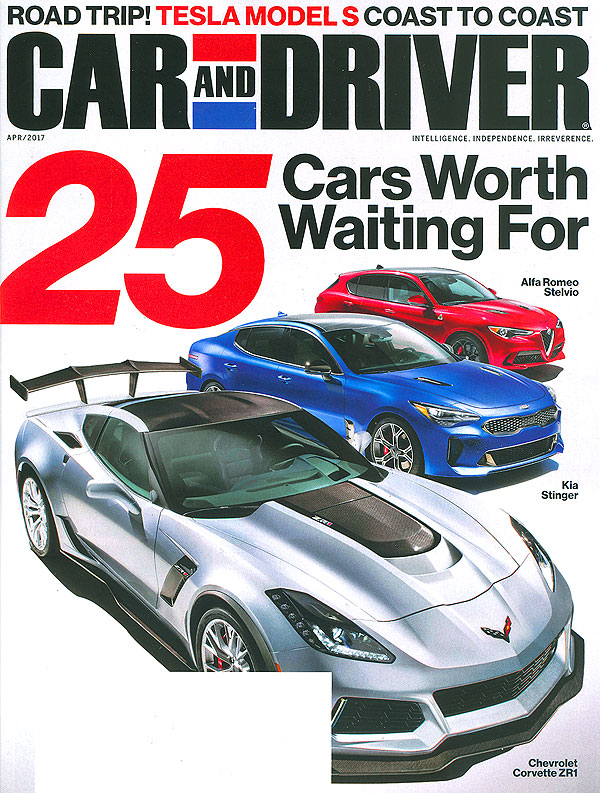 The cover story is, “25 Cars Worth Waiting For” and in front of the Kia Stinger and Alfa Romeo Stelvio is the 2018 ZR1 Corvette. I’ve seen magazines do this before, about a month before the official debut, a publication will show images that are about 98-percent spot on. The image on the April 2017 Car and Driver cover and in the feature story, look Photoshop-enhanced, but not cobbled together.

As an illustrator and stylist, when I look at something “new” I go with my very first, gut reaction. When I saw the Car and Driver cover I said out loud, “WOW! The long article leads with a front/top view of the ZR1. The “25 Cars Worth Waiting For” runs from number 25, backwards to number 1, which is the ZR1 Corvette.

The two page write up by veteran Car and Driver auto journalist and author, Don Sherman is brief and to the point. Just a teaser, actually. The image is a rear ¾ view that like the other images, looks Photoshop-enhanced and not cobbled together. Hard core details are sparse and speculative, but I’m sure they’ll spill more next month.

Sherman’s guesstimation is that the ZR1 will pack at least 750-horsepower, derived from a more stout Eaton supercharger. Since the C7 Z06 is available as a coupe or convertible, with either a 7-speed manual or 8-speed automatic transmission, the ZR1 will also be available in those configurations.

There were no details about suspension, brakes, wheels, tires, etc. Sherman uses a comparative “formula” that speculates that the C7 ZR1 will list for $135,624. We’ll see, but that seems about right, considering that the last C6 ZR1 had a base price of $112,500. 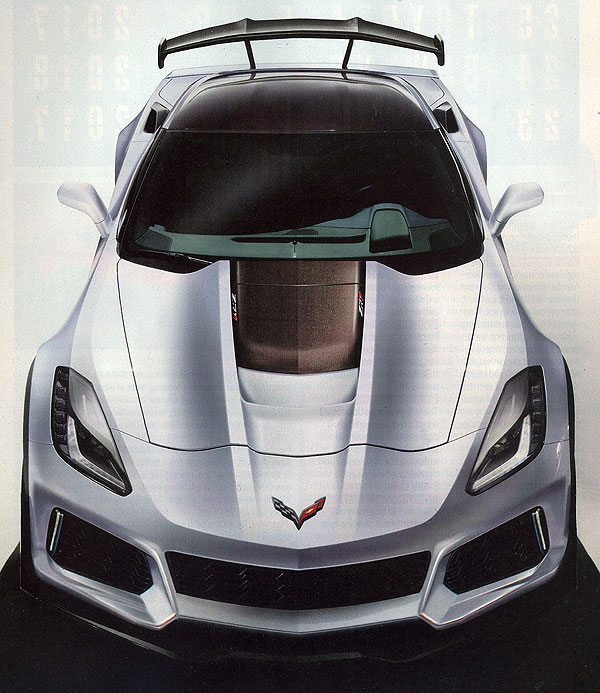 WHAT I LIKE: This is just my opinion addressing asthetics-only, and might be worth what you’re paying for this article:

The Front End: it all integrates. While big, “flaring side nostrils” is the latest “look” for performance cars (and often, to me, looked tacked on), the inside angles of the lower front/side openings, match the line flow from the inside edge of the headlights. Nice flow of lines.

The Front Splitter. The basic shape mimics the forward edge of the lower valance but juts out a lot more that the splitter on the Z06. This is MUCH more aggressive and obviously race car inspired.

The Hood. This is a very nice, unique treatment. There’s a flat ridge on both sides of the hood dome that mimics the flat ridges on the tops of the fenders. The air extractor is gill-like and subtle. It’s a little hard to tell what’s going on on the top of the center dome, as there’s break-line just behind the “ZR1” badge. It’s unclear what that break-line is there. If the rendering is correct, Corvette stylists chose not to carry over the C6 ZR1’s peek-a-boo clear plexi supercharger cover. That, would not have bothered me.

The Rear Wing. Remember the 2010 Z06X Concept Corvette? Sure you do, it was a juiced Z06 with an awesome C6.R-style rear wing. Too bad Chevrolet didn’t make a 2013 Special Edition Z06X. But it did show what designers were thinking and considering – which is the purpose of concept cars. According to Mr. Sherman that ZR1’s rear wing will be manually adjustable. The wing isn’t just a utilitarian flat, race car parts catalog-like wing, it’s got “Style”! The vertical supports are angled in and the ends of the wing have vertical winglettes.

What I Don’t Like. Ahh, not much, actually. I’ll keep my power dry, as the images in the story might not be completely accurate. I would have liked to seen dedicated front fender vents and not just Z06 vents with a “ZR1” badge. The wheels, although beautiful, are standard option C7 Z06-style and size wheels. For the flagship Corvette I’d like to see dedicated wheels, like we saw on the C6 Z06.

That’s it! Kudos to the Corvette team. I’ll save a “BRAVISSIMO” for next month. Stay tuned! – Scott