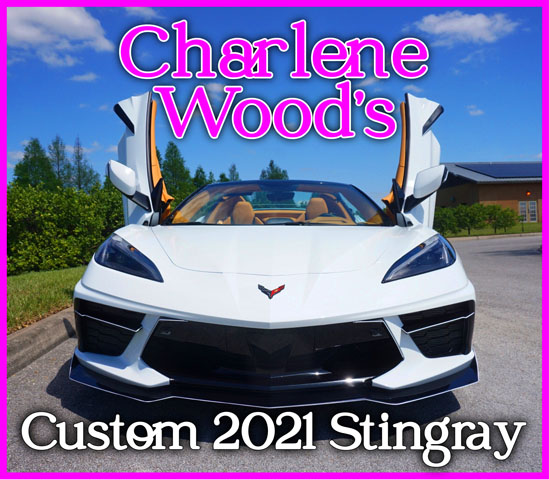 Adding the Feminine Touch to the Corvette Community

Dateline: 7-28-22 This story was first published in the June 2022 issue of Vette Vues Magazine, story and photos by K. Scott Teeters, except where noted. – Since the dawn of the automobile, people have been personalizing and customizing their vehicles. The Corvette community can trace its roots all the way back to around 1910. Young Harley Earl, the future Father of the Corvette, learned the craft of “coach-building” while working in his father’s shop, Earl Automotive Works.

Jacob William (J.W.) Earl, moved to Los Angeles, California in 1899 and launched “Earl Carriage Works”, and began building and repairing wagons and horse-drawn carriages. Along the way, J.W. started making accessories for his customers and in 1908 changed the name of his business to, “Earl Automotive Works”. Around the same time in Los Angeles, the Horsley Brothers started the first movie studio, which was effectively the beginning of the Hollywood movie business. J.W. Earl expanded his business by building wagons, buggies, chariots, and other rolling stock for the movies. 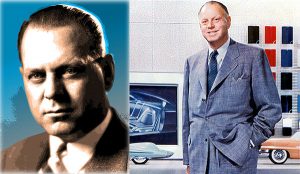 It wasn’t long before the early movie stars began hiring J.W. to make customized automobiles for their personal use. J.W.’s teenage son, Harley started working in his father’s shop and learned the custom car and design business from its beginning. Young Harley liked to “play with mud” and would use real dirt mud to hand-form new shapes for cars.

Harley Early went on to be hired by General Motors President, Alfred P. Sloan, and by the age of 34-years old, was in charge of GM’s newly created “Art and Color Department”. Earl literally created the art of automotive styling. Prior to this, car companies gave “design” no importance at all. When Earl started cranking out beautiful cars, the industry took immediate notice and was never the same. 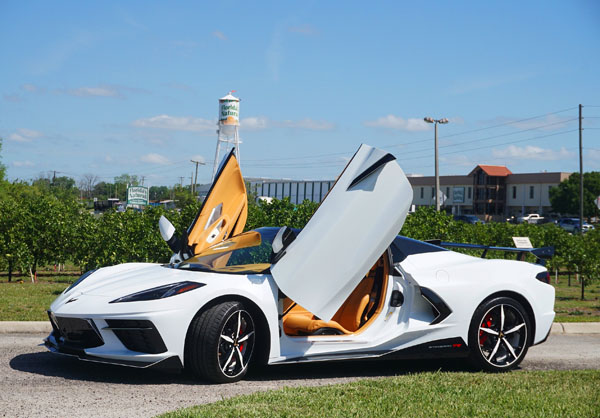 Arguably within days or weeks after the first Corvette was delivered in the summer of 1953, we can be certain that someone was personalizing and customizing the Chevrolet’s new plastic fiberglass Corvette. Thanks to Harley Earl’s background, personalizing and customizing is deep in the DNA roots of the Corvette, and it all goes back to customized, personalized cars for the stars at the beginning of the Hollywood Dream Factory. 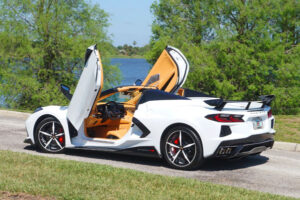 Around 2010, while still living in California, Charlene started going to car shows with the brother of her significant other, Mark, who has a few cool rides of his own; including a 1928 Ford, a 1969 Camaro, and a 1970 El Camino. That’s when she started seriously looking at unique cars; it was bound to happen! When you start to get close to and educate yourself about the car culture, it doesn’t take long to start wanting a cool ride. 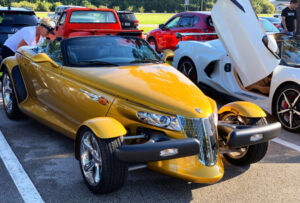 In 2018 Charlene finally spotted a car in Texas that she hand-to-have; an Inca Gold Pearl Coat 2002 Plymouth Prowler roadster. The Texas Prowler was a one-owner car with only 2,600 miles on the odometer, garage kept, and no scratches or dents; a true cream puff and the paint just glows.

Charlene bought the car sight-unseen and made a few slight changes, including; a chrome grille for a little extra bling; side markers; and a chin guard. There’s that “personalization thing”.

2002 was the last year for the retro-styled, Daimler-Chrysler-built hot rod roadster. The Prowler started out as a concept car in 1993 that amazingly went into production in 1997 as a Plymouth and was only built for five years. The Prowler was a most unlikely automobile for a major car manufacturer to produce. Hot rodder, Chip Foose designed the car as part of a Chrysler-sponsored Art Center College of Design project and was originally intended to be a coupe, but was later made into a roadster by the Chrysler design team. 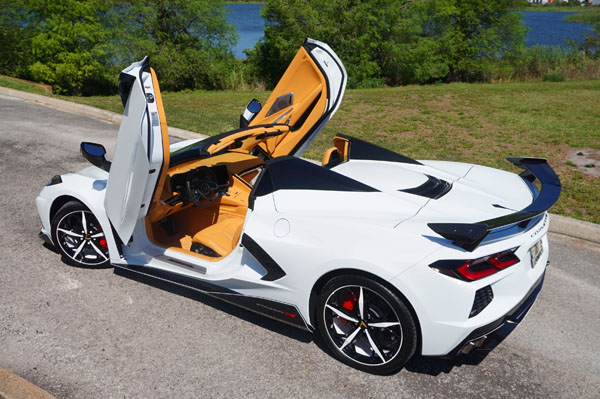 As Charlene commented, “It’s a fun car to drive, buy you can’t do anything with the car besides enjoy it.” Because of it’s extreme limited-use, Plymouth only sold 11,702 Prowlers in six years of production. The Prowler didn’t help Chrysler’s sagging Plymouth Division, as by June 29, 2001 the division was closed down after almost 70-years in business.

The Prowler, as well as the PT Cruiser, and the Voyager Mini Van were absorbed into the Chrysler brand and only 1,436 Prowlers were built by the end of 2002. Charlene’s Prowler is stunning with special feminine touches similar to her 2021 Stingray.

It wasn’t too long before Charlene added a very cool daily driver to her garage. In 2019 she bought a new ’19 2SS Camaro Convertible and promptly added an aftermarket cat-back system for some extra rumble. Now, the new generation of Camaros are fine cars; they are built on the same platform as the Cadillac CTS, and have a lot of Corvette technology built into them.

In hindsight, the 2SS Camaro Convertible primed Charlene for a C8 Stingray Convertible. But when Charlene laid her eyes on Chevy’s new drop-top Vette, she had to have one! 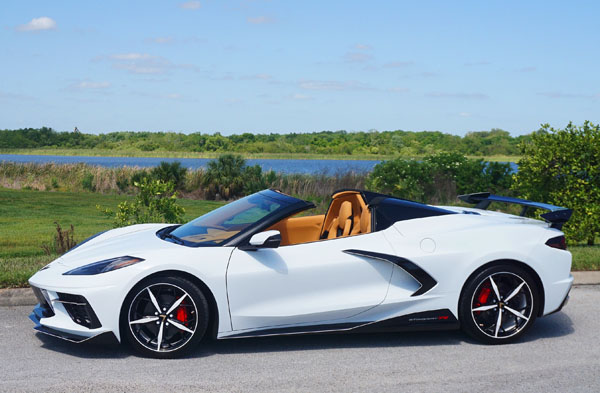 Charlene carefully studied the 2021 Corvette brochure and online visualizer to determine the options and appearance of her new C8 Corvette. She settled in on; an Arctic White Convertible; Natural Dipped 3LT interior with 2LT seats; the Front Lift System; the Performance Exhaust for some extra bark; Head-Up Display; and red brake calipers. The optional Trident wheels would be added later. 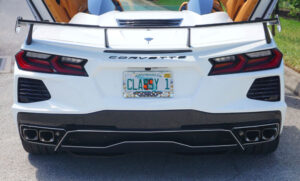 On Jan 6, 2021, Charlene went to the dealer to do business and arranged a trade-in of her Camaro. Initially, Stingray Chevrolet Bartow did not ask for a deposit, as they are a small dealership, and were waiting for their allotment of C8 Corvettes.

Since she had no interest in taking her Stingray to the Sebring International Raceway or any autocross events, she passed on the Z51 Performance Package. Even without the Z51, the C8 is a true-performance car. 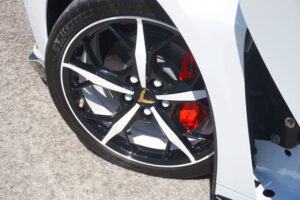 The dealer assured her that not ordering the Z51 and Trident wheels would not hold up her build. Once Bartow knew that they could get the Corvette Charlene wanted in a reasonable time, on January 21, 2021, they took her deposit, thus starting the delivery clock ticking. On Memorial Day, her 2021 Arctic White Stingray Convertible arrived, was dealer prepped, and ready for pickup! 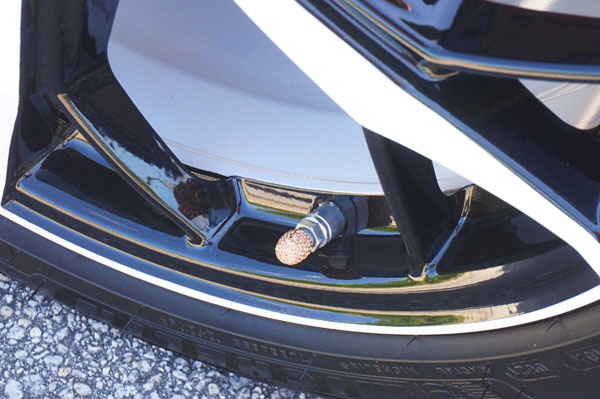 Owners of new C8 Corvettes almost all say the same thing, “There’s a ton of stuff to learn about the car.” After a few weeks of getting used to her new Stingray, Charlene started her customization project. When the Trident wheels came in, Charlene connected with Southern Powder Coat in Bartow, Florida to give the wheels a unique look. The Trident rims were flat silver and to make the 5-spoke “mag” section of the 15-spoke rims stand out, she first had the rims powder-coated gloss black.

Then the barrels and the front face of the five central spokes and outer rim were powder-coated gloss white to make the remaining ten spokes and center section visually pop. The white lug nuts, gold C8 Cross Flags cap, gold valve stem cap, and bright red brake calipers beautifully finish off the Trident wheels. There was a time when custom wheels were the end of most owners’ personalization. But Charlene had more plans. 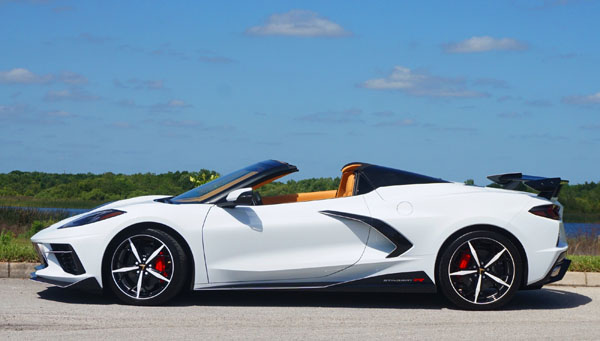 The C8 Corvette is a beautiful shape all by itself and Charlene opted for the black side scoop trim to go along with the black front openings, headlight buckets, the roof, engine lid vents, rear vent openings, and lower valance. But modern Corvettes can always be enhanced with a few aero accessories. Charlene went to American Hydrocarbon for help and came away with a gloss black extended front splitter, gloss black side skirts with “Stingray R” decals, and a gloss black elevated rear wing. 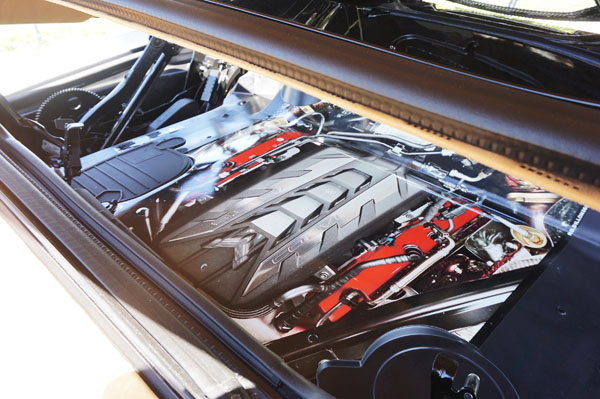 The C8’s new 6.2-liter/378 cubic-inch, 495-horsepower LT2 engine is a jewel inside and out. Stingray Coupe owners get to see the LT2 through the rear glass. Convertible owners don’t have that pleasure, as top up, or down, the engine is covered. However, under the outer engine hood and over the top of the engine, there’s an insulation panel.

At a Lakeland, Florida car show Charlene saw a cool graphic that she knew would be perfect for her C8 Convertible. Logo Graphics, in Ocala, Florida makes and installs life-size, top-down view photo decals of the LT2 engine cut-to-fit the Stingray Convertible engine covers. 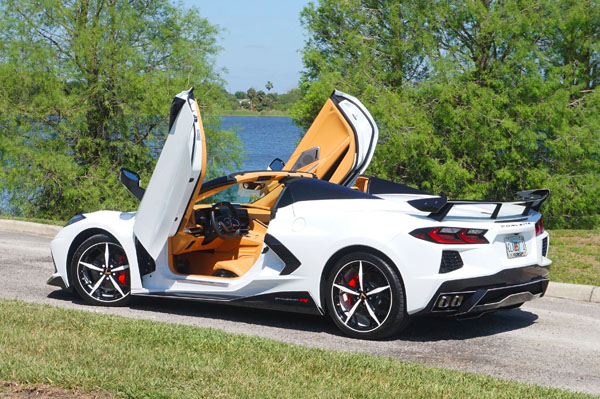 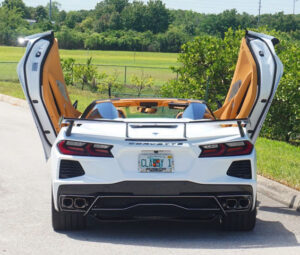 Years later, Gandini used the upswing “scissor” doors on the Lamborghini Countach which was the first production automobile to have such doors. The Countach was part of a wave of exotic, high-end supercars that defined the 1980s. Instantly, the door design was called, “Lambo doors” and it wasn’t long before several small companies designed hinge kits for hundreds of different cars. Charlene’s Lambo doors were installed by AutoXTC, in Tampa Florida. 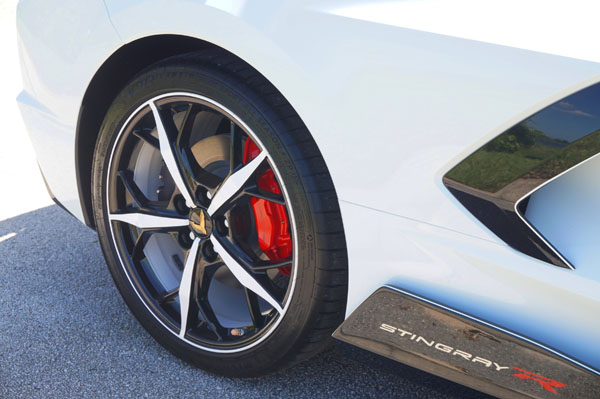 Custom cars are all about the details. When you live in Florida it can be very “buggy” in the warm months, making ceramic coating a blessing. The ceramic coating was applied by Jay Pro Auto and Aviation, in Lakeland, Florida. One of the last things Charlene had done to her Stingray was the white pin-stripping tape applied to the edges of the front splitter, the front grille blades, the side skirts, the rear wing, and the rear lower valance.

After spending several hours talking with Charlene and photographing her 2021 Stingray Convertible, there was only one thing I could imagine to add to her now, “show car quality” Corvette; an LED lighting kit. Charlene smiled and said, “Yup, that’s next! I’ll be getting the LED kits for the wheels, scoops, and under the car. And the new kits have remote-control color change devices and apps for your phone.” How cool is that? 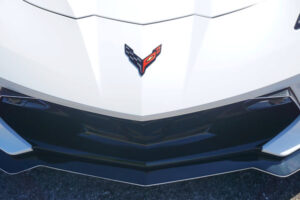 The Corvette world is mostly populated by male owners and in the past, Vette Vues has put a spotlight on many Corvette gals, including; Jill Jahn’s 1959 Corvette; Lyn Adam’s 1964 Grand Sport Roadster replica, and her 2009 GT1 Championship Special Edition Z06 (Lyn has owned 28 Corvettes in her life!); Joanne Woodard‘s Custom 2016 Coupe (Joanne sold her 2016 Coupe and has a C7 that she’s customizing that we will cover); and we’ve covered Mary Carol Plott‘s 1967 427 Coupe, 1971 Convertible, 1981 Coupe, and 2001 Z06. Mary Carol and three of her Corvette gal-pals will be the subject of an upcoming story.

Charlene Wood’s custom 2021 C8 Corvette Stingray is an asset to the Corvette community and Vette Vues is looking REAL GOOD with her car on the cover! – Scott

PS – Vette Vues loved Charlene’s C8 Stingray so much, that they put it on the cover! 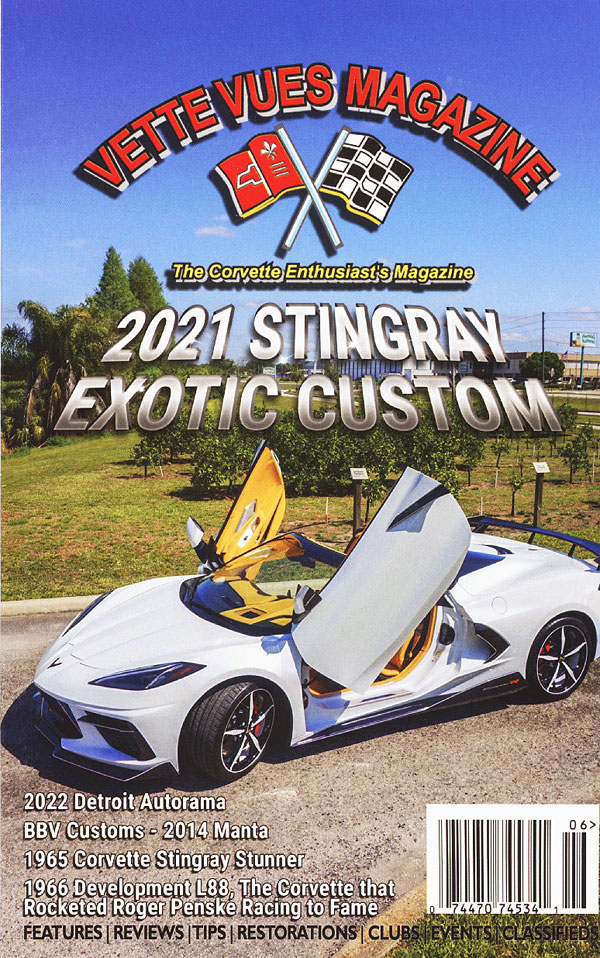 If you are in south-central Florida, in the Lake Wales area, be sure to visit the Florida’s Natural Visitor Center and Gift Store, on Rt. 27, in Lake Wales! 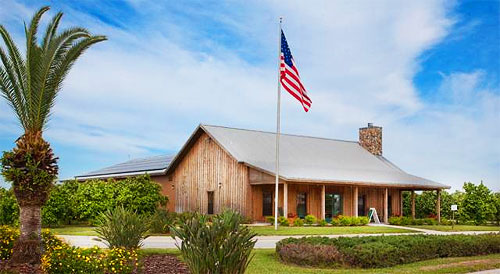 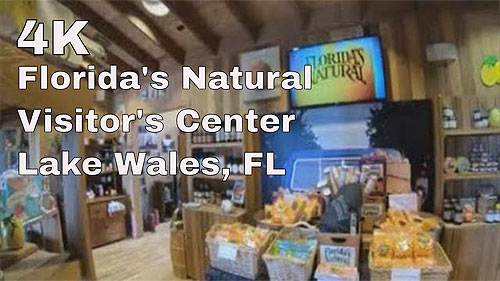