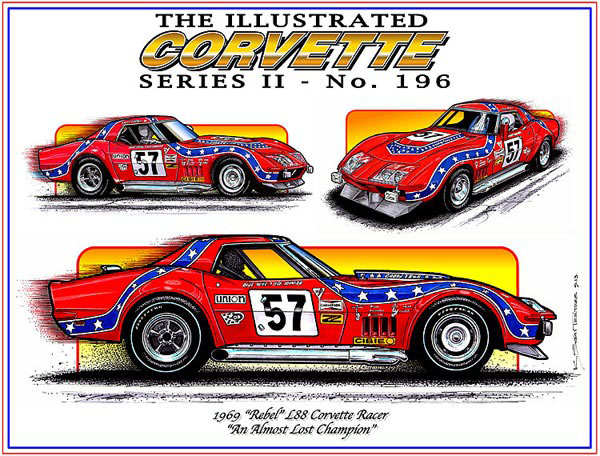 Words and Art by Scott Teeters as originally written for Vette Vues.

Dateline: 10.15.15: This a Corvette racecar story with a happy ending and a big, “Cha-KING!” Racecars are a lot like racehorses, most live hard lives and tend to get used up and discarded. Some cars are saved and later surface as “survivor” cars (the horses go to stud farms). What happens to most is that after the cars no longer competitive; they’re sold off, often for not much money. The next owner applies a new livery and makes modifications that take it farther away from the original configuration. A few accidents or a fire later, and the cars are scrap.

At the Barrett-Jackson Scottsdale 2014 Auction in January 2014 the #57 Rebel racecar was the second most expensive car to sell at the event, going for a staggering $2,860,000! The most expensive car to sell at the auction was a 1967 Corvette L88 Coupe, red-on-red, that went for $3,500,000 – $3,850,000 including buyer’s fees! That’s hot HOT L88s are. It’s important to remember that this car was fully restored and was the recipient of the Duntov Mark of Excellence Award. I’m sure the history of this car is interesting, but considering how few RPO L88 Corvettes were built, plus the fact that a 1967 L88 would have cost “around” $6,200 – that’s just mind numbing! Back in the day, NO ONE knew how valuable these cars would become. 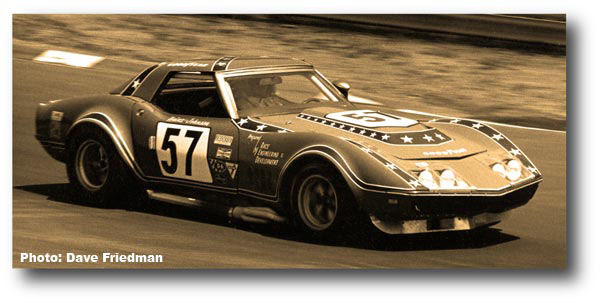 First, a little about the L88s. Field-tested in 1966 by Roger Penske and Dick Guldstrand at Daytona and released for production in 1967, the L88 was Duntov’s latest, greatest “racer kit” package. The L88 Corvettes were arguably the most aggressive RPO option ever made in Detroit. Although not the “lightweight” that Duntov wanted, it was an extreme car. Launched in ’67, the 427 L88 was a collection of all-out racing parts and deletes, but the sex appeal was the L88’s aluminum heads that saved 70-pounds up front. In three years only 216 RPO L88 Corvettes were built.

They were very stealthy because they looked like any other big-block Corvette. The ’67 L88 could have passed for a 390-HP L36, or a 400-HP L68, or 435-HP L71. But in ’68 the L88 got a unique domed hood. And to add to the confusion, a lot of L88-style hoods were installed on ’68 and ’69 Corvettes, and a lot of big-block Corvettes had their street engine replaced with a crate L88. So, the L88 story can sometimes get a little murky, however, documented RPO L88 Corvettes are selling for BIG numbers at the auctions. 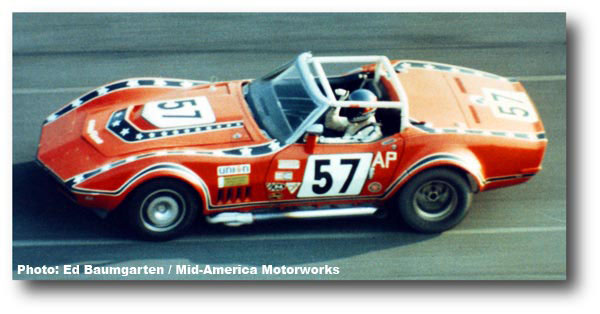 The L88 was really the end-of-the-line for the factory-built, package Corvette racecar that customers ordered through and took delivery via Chevrolet dealers. While the wide-body “Greenwood” might have been Duntov’s last racer kit, the car didn’t roll off the assembly line wearing the wide-body and there was no RPO number on the Corvette order form at local Chevy dealers. By this time, the “wide-body” was a business suit for purpose-built Corvette racecars.

In December ’68 and January ’69, a few months before the official release of the ’68 L88, four extra-special “lightweight” L88s were built. These cars had no carpeting and had lightweight magnesium racing wheels. The unofficial “trunk option” was a collection of parts stored in the trunk for owner installation that included an oil cooler, headers, and headlight covers. Duntov helped his racers as much as he could. The L88 was a work-in-progress and by ’69 the new open chamber aluminum heads were completed and were good for a 10-percent power increase.

A Daytona Yellow lightweight L88 was sold to Orlando Costanzo and raced at the 12 Hours of Sebring in ’69, taking 3rd in class. In ’70 the car was raced at the 24 Hours of Daytona, taking 5th in the GT-Class and the 12 Hours of Sebring, but did not finish due to a mechanical failure. In mid ’71, Costanzo sold the car to Toye English who applied the Confederate flag livery to the car. Rival, John Greenwood, from Michigan, was racing with the Stars and Stripes, and since English was from the South, he chose the Confederate flag livery. Also, Greenwood was using BF Goodrich TA Radials and English was using Goodyear racing radials. The press had fun with this one and called it, “The Tire Wars.” At the ’71 12 Hours of Sebring the Rebel finished 6th overall and 2nd in class. For the season, the Rebel won four of five IMSA races, plus the first IMSA Championship. The L88, English’s preparation and the driving of Bob Johnson and Don Yenko, delivered the gold.

The Rebel’s big season was ‘72. At the 24 Hours of Daytona, Heinz and Johnson drove the Rebel to an 8th overall and 1st in the GT class. Goodyear was so happy; they took out a full-page ad in the Wall Street Journal! The 12 Hours of Sebring put the Rebel into the record books. After qualifying an unimpressive 13th fastest, Heinz took the lead in the first lap and never let up for the entire race. The Rebel took 1st in class and 4th overall. Winning their class at Daytona and Sebring in one year was a Corvette record that stood for 31 years. Plus, the Rebel was the only C3 to win both the Daytona and Sebring class events. And if all that isn’t enough, the Rebel’s win record was accomplished without major sponsorship and without “professional” drivers.

Now, you would think that the Rebel might have gone off to the show car pasture. No, no, like most racecars, the Rebel was sold and raced a few more years. Toye English sold the Rebel to Alex Davison, who then sold the car to Dr. Charles West and was eventually parked in West’s junkyard under a tarp, pretty much forgotten.

That is, until Kevin “Mr. L88” Mackay read a story by Walt Thurn about the lightweight L88s. Mackay is a master researcher and quickly found the forgotten Rebel in 1991. Dr. West knew nothing about the cars racing heritage. Aside from the missing L88 and transmission, different stripes, and ’73 nose, the car

Mackay bought the hulk for $7,000 and took it back to his Corvette Repair shop where he and his team carefully restored the car to it 1972 Rebel glory days. Kevin sold the brought back to life Rebel to Larry Bowman in California who later sold the car to Ed Foss from Indiana for over $750,000. Of course, no one dreamed that the selling price would keep going up and up and up!

So, if you are ever in a junkyard and you see an old Corvette racecar, look closely… Look VERY closely. – Scott

Here’s the full list of the Rebel’s career highlights:

* In 2000, it received the NCRS American Heritage Award

* In 2008, it was one of only a few select L88 Corvettes to have its racing history covered in detail by Dr. Peter Gimenez in his definitive L88 book: Corvette Racing Legends.

* Jan 2014, it was sold at Barrett-Jackson Auto Auction for a new record price for a racing Corvette of $2.86 Million dollars. 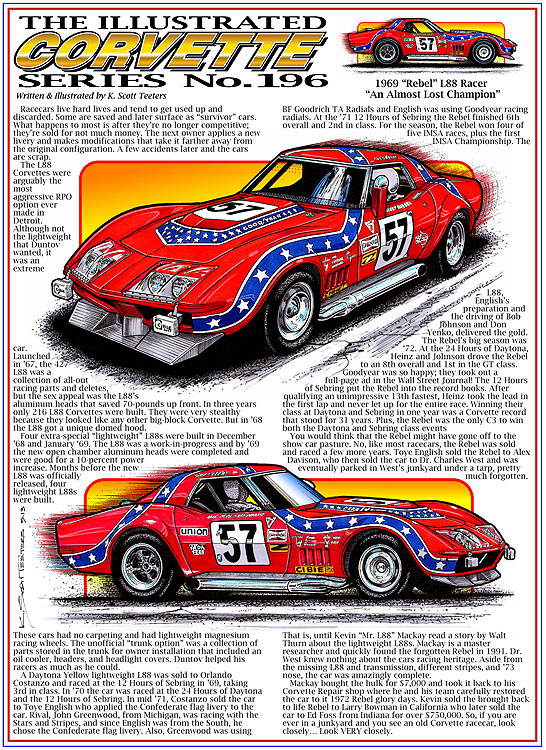