Words and Art by Scott Teeters as written for Vette Vues.

Zora Arkus-Duntov, the Godfather of the Corvette, proves that the pen is mightier than the sword!

Dateline October 2015: By the end of the production run of the 1954 Corvette, it was obvious – the car was a flop. Only 300 cars were built in 1953 with many given away for promotions. (John Wayne, General Curtis LeMay, ABC News commentator Alex Drier, and movie star Dinah Shore got 1953 Corvettes) For 1954 Chevrolet dropped the price of the Corvette $724, down to $2,774, a 30.1-percent reduction, but it only helped a little, as only 3,640 Corvettes were sold. The same year, Chevrolet sold 248,750 240 Bel Air four-door sedans! When an executive told Duntov that the Corvette was finished, Duntov put pen to paper and proved the pen to be mightier than the sword, or the calculator.

Duntov, a newly hired, lowly engineer, wrote a memo to Edward Cole and Maurice Olley, arguing the case that to drop the Corvette would be an admission of failure, and a public embarrassment to all of Chevrolet. He suggested numerous modifications to the car, and improvements to the sales effort. He also suggested the creation of a separate department within Chevrolet to oversee Corvette development.

Duntov knew a lot of people in the automotive industry. We have to wonder if he “knew something” that perhaps Chevrolet management didn’t know. One week later, on October 22, 1954, when 1955 Ford Thunderbirds arrived in dealer showrooms, 4,000 orders were placed the first day! Even though the ’55 Corvette had the all-new 265 small-block Chevy engine, only 700 cars were sold. The Corvette had a lot of catching up to do. – Scott

PS – We have dozens of C1 Corvette art prints available at out safe and secure Amazon store, HERE. 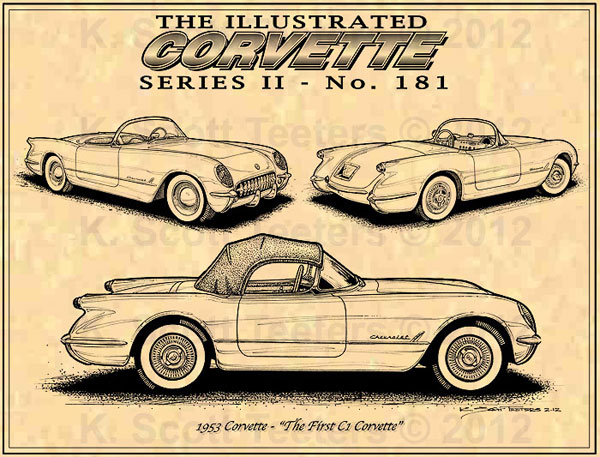