October 4, 1973 – The Four-Rotor Experimental Corvette makes its debut at the Paris Salon Automobile Show – Video Below

Dateline: 10.4.15: GM president Ed Cole spent $50 million dollars for the license to develop and build Wankel engines for Chevrolet cars. The plan was to start with a 2-rotor Wankel as an option in the ’74 Vega in October 1973. But the car biz is part show biz, and what a better way to make a big splash for the new “rotor-motor in a Chevy” concept than to build a super-sexy Corvette with not just a Vega-type 2-rotor Wankel, but a 585-CID, 350-to-370-HP 4-rotor monster! Corvette engineer and Duntov’s right-hand man Gib Hufstader, hand-built the unique engine and said that it could have produced 480-HP!

VP of Styling, Bill Mitchell directed the look of the Four-Rotor and Hank Haga and Jerry Palmer worked out the details. Inspiration for the design came from the Mercedes speed record-breakers of the late ‘30s. Getting to the teardrop shape Mitchell wanted wasn’t easy, but the end result definitely looks like a “Corvette” and had a 0.325 coefficient of drag – very low for its day. The bi-fold, gull-wing doors and angled windshield glass was show car, sauce for the goose! 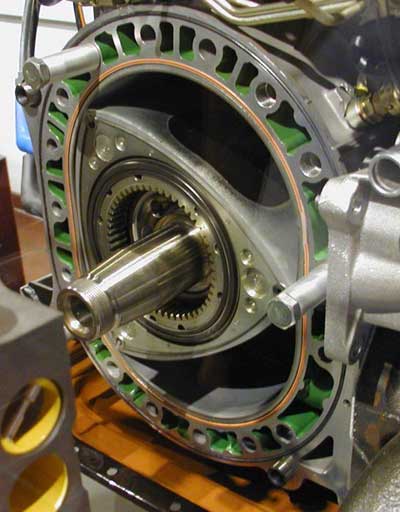 As sleek and cool as it was, the Four-Rotor didn’t have a snowball’s chance. The Wankel engine was a gas-guzzler and hard to get emissions certified. It wasn’t long before Ed Cole retired when the entire Wankel project was shut down. The Four-Rotor car was later retrofitted with a transverse 400-CID small-block engine, shown as the Aerovette. For a few weeks the Aerovette was scheduled to be the next Corvette (the C4), but that too came to a screeching halt. Corvette sales were booming despite reduced performance, so it was decided to “let’r ride” for a few more years. The Corvette wasn’t “broke” so they weren’t interested in “fixing it.” – Scott