Dateline: 10.7.53: It was a rough start for the Corvette. First of all, the concept of the “sports car” had not yet grabbed the attention of mainstream America. Fast, powerful American cars were well known, but they were big, in a time when “more was better and bigger was best!” In truth, the 1953 Corvettes were more like pilot cars. The engineers and assembly workers were figuring things out as they went along in their little, makeshift assembly facility in Flint, Michigan.

Imagine what the American people must have thought in 1953. Here’s a little tiny car (by American standards), with an in-line six and a two-speed Powerglide, no hardtop (convertible only) and no roll-up side windows – for $3,498. The only options were a heater and an AM radio. Imagine that, the heater was optional. So, a fully loaded 1953 Corvette cost  $3,734.45. A four-door Cadillac Series 62 sedan cost $3,666. A 1953 Lincoln Cosmopolitan Sport Hardtop Coupe cost $3,293. And a top-of-the-line 1953 Chevy Bel Air Convertible cost $2,093. The American people and the other carmakers must have thought that Chevrolet has lost their minds! 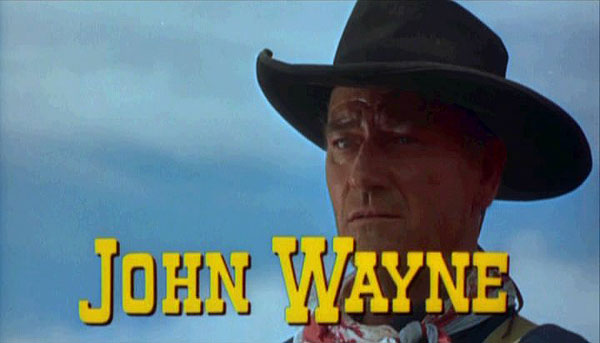 Its not known how much The Duke liked the Corvette, if at all, or even how long he had the car. There are many web pages mentioning The Duke’s ’53 Corvette but nothing concerning his opinion of the little plastic Chevy. But at a towering 6-feet, 4-inches, I can’t imagine he was very comfortable behind the wheel. Years later John Wayne was known for preferring big vehicles. He had a customized 1966 International Harvester Travelall with the livery, “War Wagon.” Through the ‘70s Wayne had three George Barris custom station wagons. His customized 1975 Pontiac Grand Safari station wagon had a raided roof so that he could wear his trademark cowboy hat! So, how much do you think he liked the Corvette?– Scott

And here’s the full movie!!!