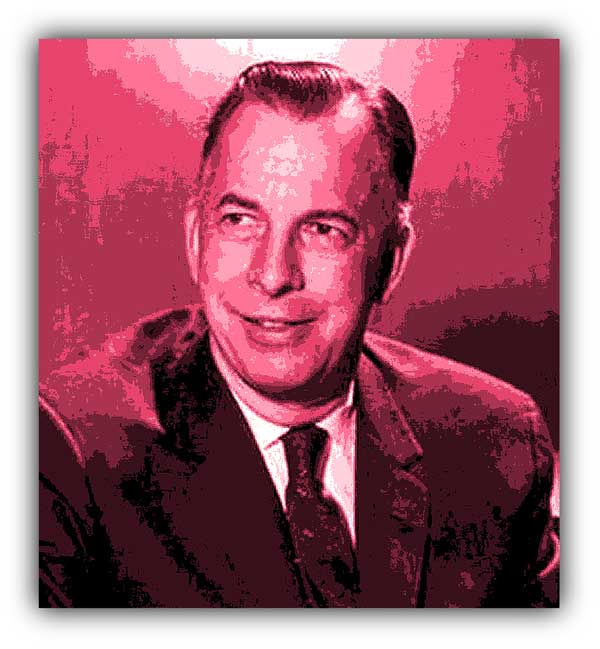 Dateline: 10.2.18 (All images GM Archives) The Corvette is arguably the greatest enigma in Detroit history. Every car line has to carry its own sales weight. In 1957 6,339 Corvettes were sold, the same year, Ford sold 21,380 Thunderbirds. Corvette sales didn’t surpass that figure until 1963 when 21,513 Corvettes sold. How did the Corvette survive? The Times and Angels.

It was the Wild West days when William Durant founded General Motors on September 16, 1908. By 1910 Durant lost control of General Motors to a bankers’ trust. In 1912 Durant started Chevrolet, secretly bought back controlling shares of General Motors, reorganized in 1916 as “General Motors Corporation”, only to lose control again in 1918. 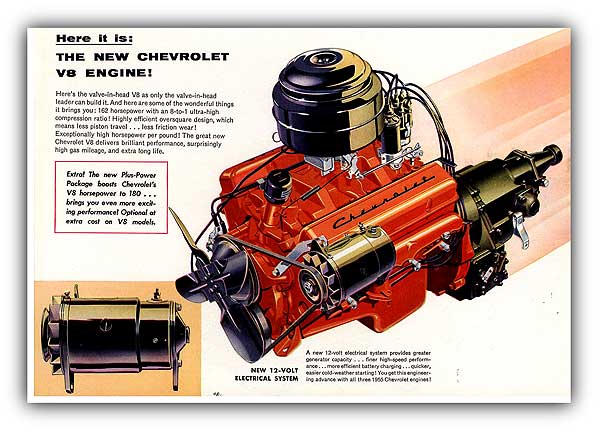 Ed Cole was born on September 17, 1909 and grew up on his family’s dairy farm. As a kid, Ed designed, built, and sold radio sets and when he was old enough, the natural mechanic started working at an auto parts supply store and building hot rods. For a time, Ed thought he wanted to be a lawyer, but that “car thing” got in the way. 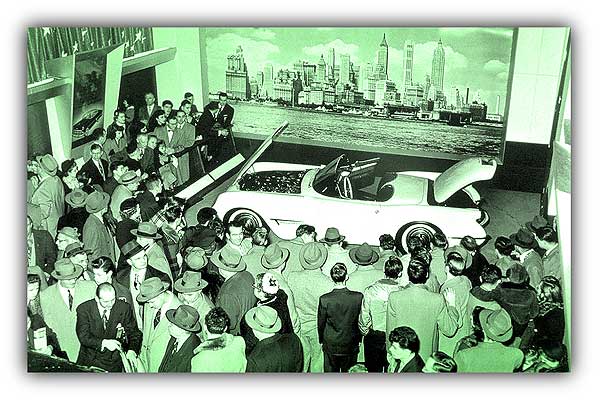 In 1926 GM bought the Flint Institute of Technology and renamed it, “General Motors Institute”, focusing on creating industry and business leaders through a co-op program, teaching all aspects of automobile manufacturing. Cole enrolled in 1930 and was so bright that by 1933, without finishing his GMI education, he was hired by Cadillac’s engineering department. During WW-II Ed became the chief design engineer on GM’s light tanks and combat vehicles program. In 1946 Cole was promoted to chief engineer at Cadillac and was the lead engineer on the groundbreaking, 1949 Cadillac 331 OHV high-compression, high-revving engine. Ed Cole was the “go-to” guy in GM engineering, with great things ahead of him. 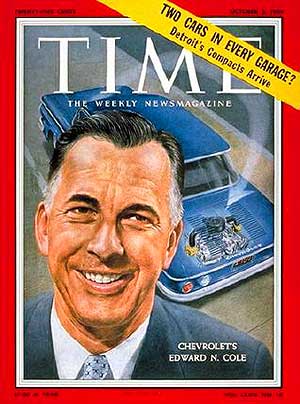 There was a tremendous economic boom after WW-II thanks to pent up consumer demands after the long depression and war, but by the early 1950s a slowdown was in the making. A month after the Corvette made its debut at the New York Motorama; Harlow H. Curtice became the President of GM and understood that to make money, you have to spend money. In February 1954 Curtice announced a $1 Billion dollar plant and facilities expansion plan. Ford announced their own $1 Billion dollar capital expenditure and Chrysler committed $500 Million for expansion. Curtice doubled down with another $1 Billion and third triage of $1 Billion in 1956! Time Magazine voted Curtice “Man of the Year” for 1956. Curtice said, “General Motors must always lead.” GM was the largest corporation in the world and Ed Cole’s star was rising.

With the success of the Cadillac 331 engine, Cole was in a prime position. In 1952 Chevrolet general manager Tom Keating promoted Ed to Chevrolet’s chief engineer. Cole’s major assignment was the replacement for the 23-year-old Chevy Stovebolt Six. A V8 project was in the works, but Cole hated it and started from scratch, instructing his team that the engine should be compact, lightweight, and powerful. By the fall of 1954, the new 265 V8 was ready for 1955 Chevrolet cars, including the Corvette. No one dreamed the basic design would still be produced over 60 years later. The next step in Cole’s career was Chevrolet general manager in 1956. 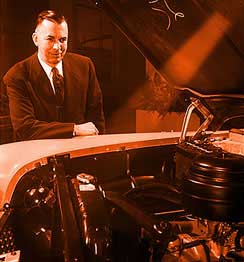 In 1952/1953 a 43-year-old Russian engineer seeking employment named Zora Arkus-Duntov sent letters to Studebaker, Chrysler, Lincoln-Mercury, Ford, and General Motors, explaining his background in engineering and racing. Duntov was told that he’d find better opportunities with smaller companies, because big car companies make bread-and-butter vehicles, and don’t have much need for his skills. Zora wrote two letters directly to Chevrolet engineering chief, Ed Cole. In November 1952 Cole personally responded with, “… if you are ever in Detroit, let me know.” Duntov wasn’t happy, at least is wasn’t, “Thanks, but no thanks.”

As providence would have it, Zora went to the GM Motorama at the Waldorf Astoria Hotel and “fell in love” with Harley Earl’s EX-122 “Corvette” concept car. Years later Duntov said, “… I thought it was the most beautiful car I had ever seen…” Just before the event, Maurice Olley, Ed Cole’s chassis and suspension man, was given Duntov’s first letter to respond to. On January 5, 1953 Olley wrote to Duntov, “If you are still available, and would consider employment with Chevrolet Engineering, we can arrange an interview.” After numerous letters and an interview in March with Cole and Olley, Duntov was offered a job as an assistant staff engineer, with a salary of $14,000. On May 1, 1953, Duntov was “let in the door” and things would never be the same. 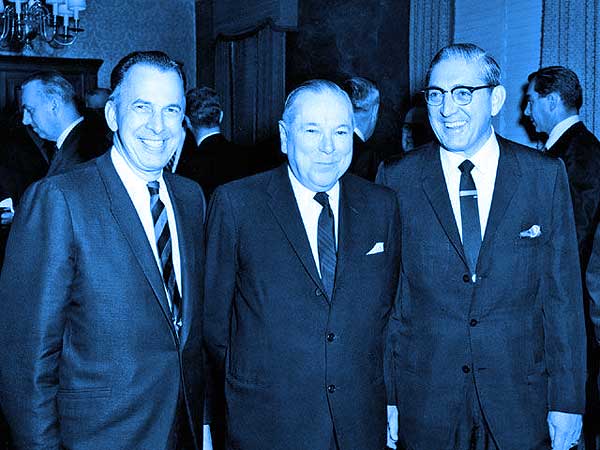 Ed Cole’s motto was, “Kick the hell out of the establishment!”. Cole also hired Frank Winchell and three-time Indy 500 winner and engineer, Mauri Rose. Duntov and Rose hit it off great. Their boss, Maurice Olley, was a quite Englishman who did not like outbursts of enthusiasm; such as whistling. Rose could be abrasive and Duntov was outgoing and gregarious. It didn’t take long for Duntov and Olley to start chaffing. The GM blue/gray suit world was a very different from Zora’s European continental culture. The culture clash was shocking to Duntov.

Olley did not like Zora’s “Let’s try this!” style of engineering, he wanted calculations. Soon, Olley suggested Duntov might consider employment somewhere else. The final straw came when Duntov told Olley he was off to the 24 Hours of Le Mans drive for Allard. Olley said, “No!” so Duntov went over his head to Cole, who wasn’t much happier. Ed explained that Maurice was retiring soon and Zora was in good position to fill Olley’s place. When Zora explained that the Allards used Cadillac engines and engineers for assistance, Cole grudgingly agreed, but Duntov’s junket would be without pay. Zora was so put off, he bought a one-way ticket, intending to not return, and send for Elfi later! I’m sure that Ed Cole’s colleagues were telling him, “Ed, he’s all yours!” Duntov would be both “angel and devil” for Cole for the rest of his career at GM. 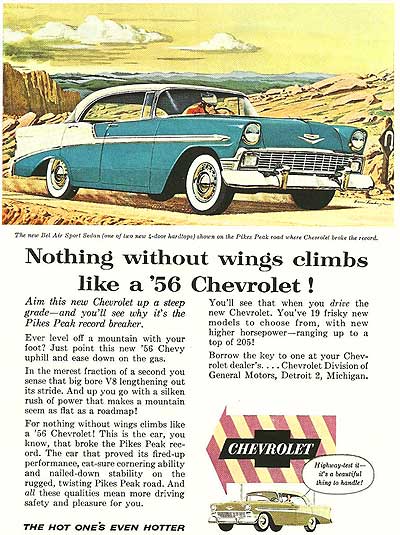 Although Cole was a corporate man, in his heart he was a car guy, and knew that the new 265 Chevy engine would be hot. Cole decided that two 1956 Chevy 210s should run the Pikes Peak Hill Climb with Duntov as part of the team and driver. The project was very successful with the cars breaking records. At the celebration party, Duntov proclaimed, “We ought to introduce the 1957 Corvette in a spectacular manor… lets show how fast the car will go!” Cole said, “Sure! How fast?” Duntov answered, “150-miles-per-hour!” Cole responded, “Yea, we should do that.” Duntov, being from another culture, thought Cole was serious!

Back at work, Duntov told his team, “Ed Cole said we should make a 150-mph Corvette.” So, the team set about the task. After some impressive performances with a heavily-modified mule 1954 Corvette with a 265 engine using a Duntov cam and aero tricks of the day, a team of three Corvettes went to the 1956 Daytona Beach Speed Trials. With John Fitch, Betty Skelton and Duntov driving, records were broken and the publicity was great. Cole was so thrilled; he proposed a three-car team to race at Sebring. Shockingly, Duntov told Cole that he wasn’t interesting in racing streetcars, so Cole put racer and engineer John Fitch in charge of the four-car Sebring effort. Duntov couldn’t resist a racing experience and joined the group of Chevrolet engineers. The Corvette took two class wins and Chevrolet ran their famous “Real McCoy” ads. 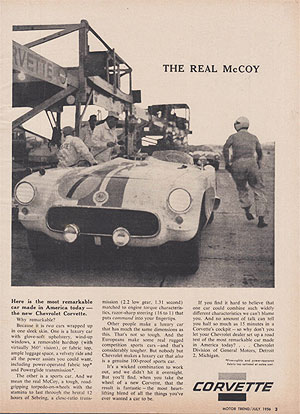 Later in 1956, Duntov heard that Harley Earl wanted to take a D-Type Jaguar, make a new “Corvette” body, and drop in a Corvette engine. This might have been a ploy, but Duntov said, No way!” Thus began the Corvette SS Racer project. Despite an embarrassing Sebring debut, Duntov was confident he could get the car ready for a three-car team for the 24 Hours of Le Mans. Unfortunately, GM chose to enforce the 1957 AMA Racing Ban. Not even Ed Cole could help.

The best Cole could do was to put Duntov and Mauri Rose in charge of a new “Off Road” parts program. Duntov handled the engineering and Rose worked with racers to field test the parts. This was the beginning of the Duntov “Racer Kit” series of options for Corvette customers. Cole’s idea birthed legends, including; 1957 RPO 684, 1963 RPO Z06, 1967 RPO L88, 1970 RPO ZR1, and many more. Ed Cole went on to become group vice president in 1961, executive vice president in 1965, and GM’s president in 1967.

Cole faced mandatory retirement from GM in 1974 at the age of 65. He immediately went to Checker Motors Corporation (Checker Cabs) and became chairman and CEO and was also chairman of International Huskey. Cole was an avid flier and a pilot. On May 2, 1977 Cole was tragically killed flying his private twin-engine Beagle B.206 Series 2 plane near Kalamazoo, Michigan.