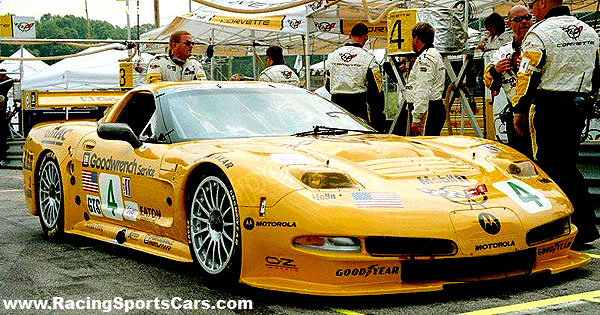 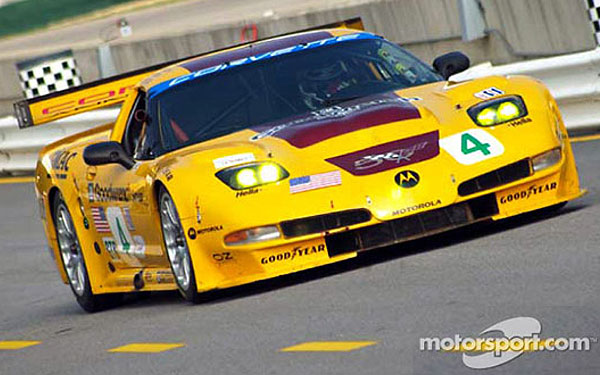 Pratt & Miller completed chassis 006 (and sister car 005) in November 2001. It debuted at Sears Point on May 19, 2002 where Pilgrim and Collins finished second in class and won at Mosport later in the year. (Chassis 005 & 006 missed Le Mans because the team needed extra time to prep, ship overseas and test, drawing older Chassis 003 and 004 back into service). 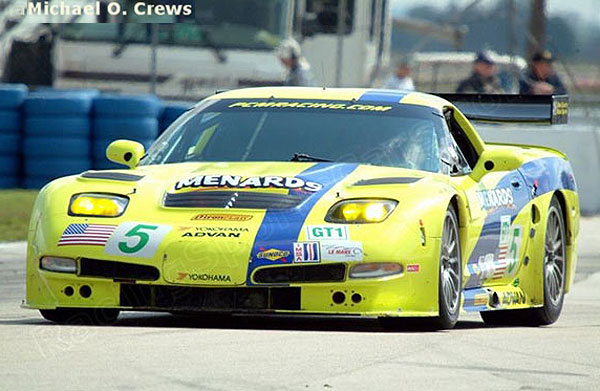 # 5 Racing in the ALMS in 2005 by Pacific Coast Motorsport Team
Near the end of 2003, C5R-006 was sold to the Pacific Coast Motorsport team. The car looked striking in bright yellow with blue trim sponsored by Menards and Yokohama (Advan) Tires. Yet by 2005 the performance of the new C6R far surpassed the C5R. Ryan Dalziel and Alex Figgie moreover were young drivers lacking experience in long distance sports car racing. Following a 6th in class at the Sebring 12 hours on March 19, they had little impact over the rest of the season. 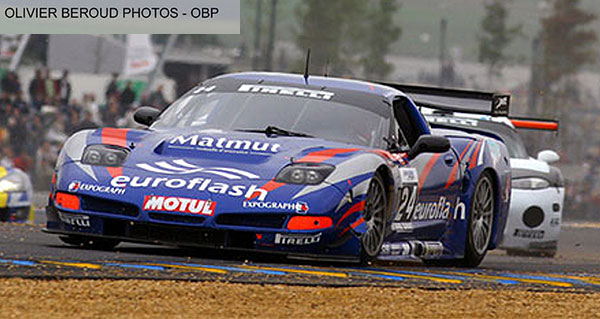 # 24 Racing in the French FFSA Series 2006/2007 by PSI Motorsports Team
In 2006 the Belgian PSI Motorsports team bought the car to race in Europe. The FFSA Series schedule consists of 7 different circuits. Each event has a Sat/Sun format for a season total of 14 races. Running as # 24, the car won the Sunday race at Ledenon driven by Philippe Aliott. PSI also entered the car in the SPA 24 hour race where Perti Kuismanenk, Marcus Palttala, Bernard Duhez, and Vincent Radermacker finished 11th overall.

# 16 Racing in the French FFSA Series 2006/2007 by PSI Motorsports Team
During 2007, running as # 16, the car won the Sunday race at Nogaro driven by Jean Claude Police and Mathieu Zangarelli. 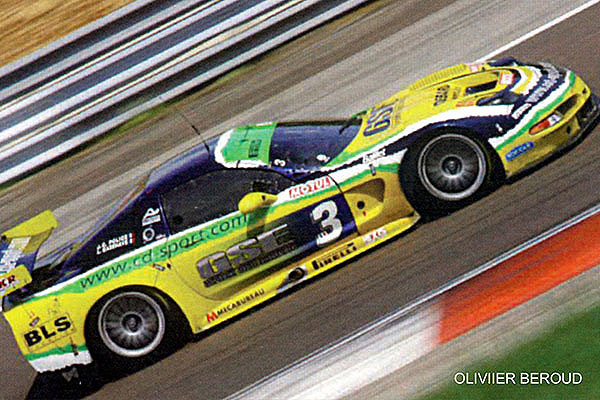 # 3 Racing in the French FFSA Series 2008/2009 by DKR Engineering Team
The Luxembourg DKR Engineering team “rented” the car from PSI to race in 2008. Running as # 3, the car won the Saturday race at Spa driven by Jean Claude Police and Laurent Cazenave. 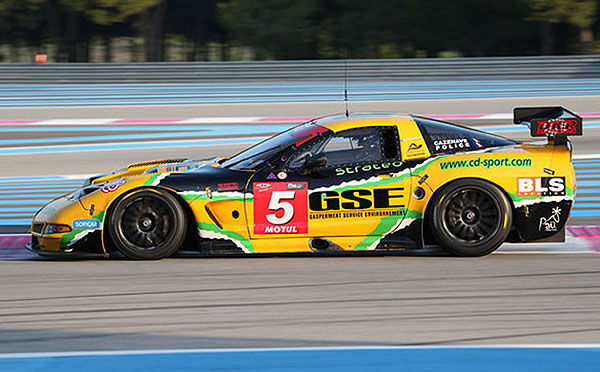 # 5 Racing in the French FFSA Series 2008/2009 by DKR Engineering Team
With no buyers at a reported asking price of 200k pounds, DKR got C5R-006 for an undisclosed sum to race it in 2009 as # 5 winning the Saturday race at Dijon again driven by Police and Cazenave. The car was stored in a basement for the next 2 years (2010 & 2011) suggesting its racing days were finished. 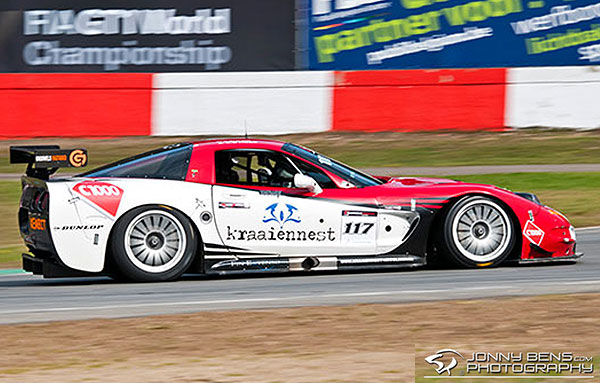 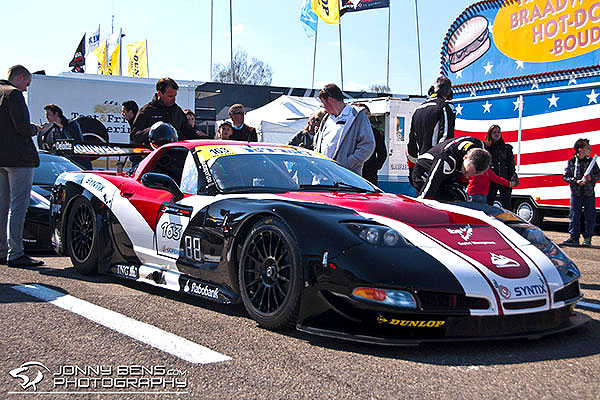 # 163 Racing in the Dutch Supercar Series 2012/2013 by Team Race Art
But wait there?s more! Roger Grouwels from Maastricht Netherlands acquired the entire Race Art operation in 2013 and drove C5R-006 himself as # 163.

From Race Car to Exotic 2014/2015 to What?s Next?
“Put through the wringer” is an understatement for a car that was raced more than 80 times over 9 seasons. Considering its history, the Race Art team decided the car would best be preserved by restoring it as it appeared sporting the Corvette?s 50th Anniversary logo in its ALMS win at Road Atlanta. The work was done under the direction of Marwin Moonen.

“The car had taken quite a beating and had not been really well serviced for years. A lot of parts and pieces were worn. We decided to take the car completely apart and inspect every nut and bolt before reassembly. Everything on the mechanical side is new or rebuilt including complete driveline and suspension. The engine was re-built by Katech. There are spares for virtually every component including body panels and the engine. We intend to sell the car as a complete package to a collector that will see the value and will enjoy racing it at historic events in the US.” 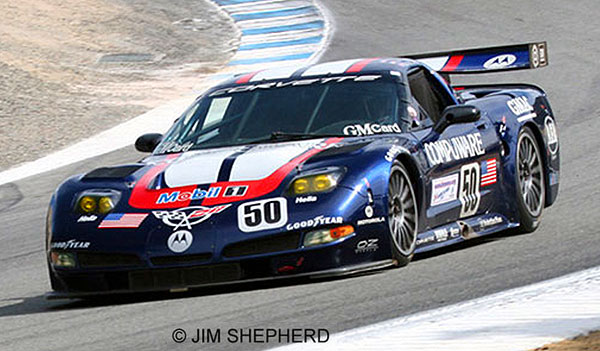 Along these lines, George Krass from Plainfield IL races # 50, C5R-008 (in special 2003 Le Mans blue & white trim) at the Rolex Monterey Motorsport Reunion at Laguna Seca and at the HAWK at Road America.