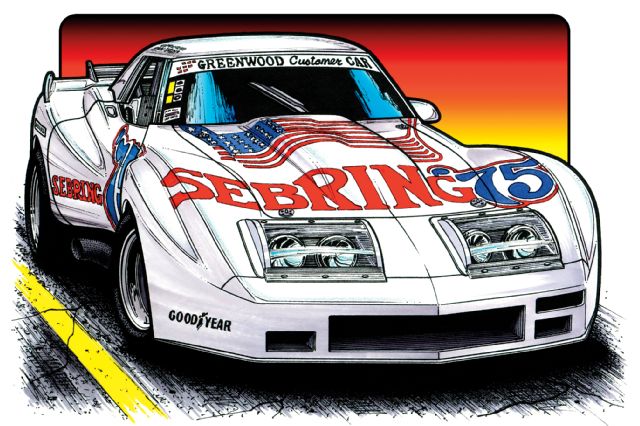 The Illustrated Corvette Designer Series No. 211

by Scott Teeters as written for Vette Magazine and republished from SuperChevy.com

The L88 “racer kit” package was huge success for the Corvette and brought racing glory through the late ’60s and into the ’70s. Winning L88s included the “Owens Corning,” “Rebel,” and the Greenwoods’ “BFGoodrich Stars & Stripes” cars. After the Greenwoods’ sponsorship expired, John and Burt Greenwood took their Corvettes to a new level. Making power was easy but tires were so wide that the L88 factory flares weren’t big enough. Enter the final “racer kit,” the widebody.

Greenwood suggested to Zora Arkus-Duntov that a widebody kit could generate additional downforce and cover the widest tires. Duntov set Randy Wittine at GM Design to the project. The front fenders were wedge-shaped and fanned out to the front edge of the doors. The rear fenders were also wedge-shaped and ballooned into large pontoon shapes, large enough to cover 20-inch-wide tires. An adjustable wing was added to the back. With massive racing tires, the look was menacing. Diversified Glass Company made the prototype parts and the widebody kit was included in the Chevrolet Power Manual. Greenwood then contracted with Diversified and started selling body kits as part of his Corvette race car business. Thanks to IMSA’s loose rules, Greenwood’s widebody Corvettes prompted Hot Rod magazine writer C.J. Baker to speculate if Greenwood’s car was still a “Corvette.” Aside from the frame, engine, transmission, rear, and front suspension, everything else was fabricated.

The all-aluminum ZL1 was set back 12 inches, lowered 4 inches, and was moved 2 1/2 inches to the right for better weight distribution. The engine setback provided plenty of room for very smooth tube-header side pipes. The frame was acid-dipped and functioned as a platform for the rollcage, X-bracing, and gussets to create a solid structure. The interior was aluminum sheetwork with an array of gauges and toggle switches, racing bucket seats, and a tilt steering wheel. 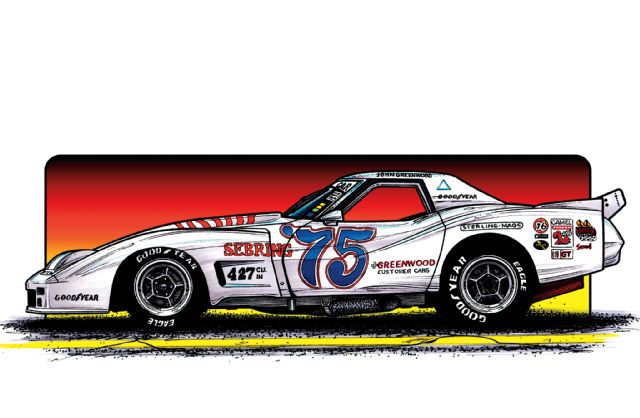 The torque-monster ZL1 received a fuel-injection throttle body that was Chevrolet designed, Greenwood modified, and cast in magnesium—it weighed just 7 pounds. With Lucas fuel-injection parts, the intake was worth 100 horsepower. The crankshaft was stock and used factory “off road” high-compression aluminum pistons, a General Dynamics cam, Isky roller-rockers, and GM heavy-duty valves and springs. The block was bored 0.060 over and the oil system was a Weaver dry-sump. The completed engine produced around 700 horsepower and the M22 transmission was blueprinted and fitted with an oil cooler.

The Greenwood Batmobile launched the Greenwoods’ race car business, and as new parts were developed, they were offered to customers. Within a year or so, almost all IMSA and Trans-Am Corvettes were Greenwood cars, or used Greenwood parts. In the 1974-1975 IMSA series, Greenwood won two races and qualified fastest 11 times. At the Daytona Speedway, the car was timed at 236 mph—a record that stood for decades.
The Greenwood Sebring ’75 was bought and sold many times and is currently owned by Charles Gnadinger in Switzerland, but is maintained by former owner Lance Smith. Duntov’s “racer kit” concept went somewhere I’m sure he never dreamed and we’re still talking about it. 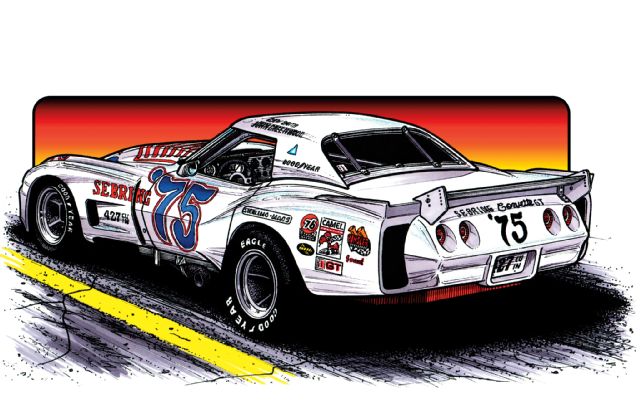