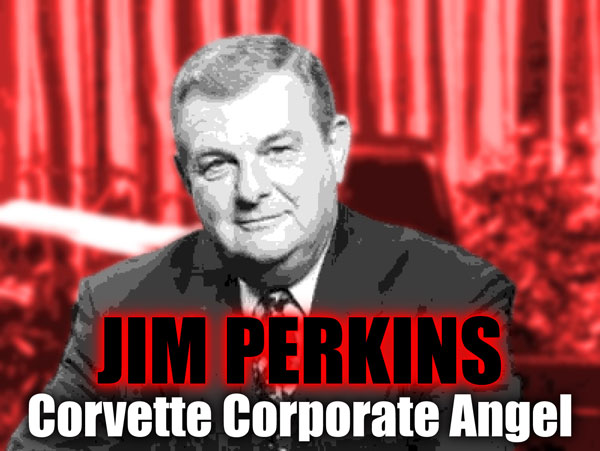 Jim Perkins: The Man That Saved the Modern Corvette

(Note: this story was originally published in the March 2019 issue of Vette Vues Magazine) – The Corvette is the most unlikely of all cars for a company such as General Motors to produce. GM is all about producing huge volumes of cars and trucks. When the Corvette came out as a late offering in June 1953, only 300 cars were hand-assembled. Engineers and builders were literally designing as they were building the cars. Sales jumped to 3,640 for 1954 and tanked to just 700 in 1955. Harley Earl restyled the Corvette for 1956 and sales went up to 3,467 units and then 6,339 for 1957. Meanwhile Ford sold 16,155 T-Birds in 1955, 15,631 in 1956, and 21,380 in 1957! They were killing the Corvette then went to a four-seater configuration, leaving Chevrolet the two-seater sports car market all to themselves. Corvette sales didn’t hit 10,000 units until 1960; not much in the big picture of GM!

The long knives were out for the Corvette inside GM. There were many that didn’t understand the Corvette, didn’t like it, and wanted it dead! What saved the Corvette were its corporate angels; Art and Color Section VP, Harley Earl; Chevrolet general manager, Ed Cole; Senior VP of Design, Bill Mitchell; Zora Arkus-Duntov; and Mauri Rose. The common denominator with all of these men is that they are “car guys”. Bill Mitchell was famous for boasting, “I’ve got gasoline in my veins!” Aside from Duntov and Rose, these men had corporate clout; they could lean on and make things happen.

In 1960, after some college attendance at Baylor University and three years in the Navy, Jim Perkins took a job at a Chevrolet warehouse, sorting parts while he finished his degree. Little did Perkins know that thirty years later, he too would become a corporate angel for the Corvette.

Perkins was a Depression Era kid from Waco, Texas. When World War II broke out Perkins’ dad tried to enlist in the military but was told he was “too old”. This was a time when men did whatever they had to do to put food on the table. Being mechanically inclined, Perkins’ dad started fixing cars, then buying, and selling cars. Perkins spent a lot of time with his dad and at the age of 14, he got an after school job at a local Texaco service station. Perkins quickly developed a reputation as a very good Chevy mechanic. Perkins fixed and sold a series of cars and finally got a hot ’52 Oldsmobile. But when the ’55 Chevy came out, he sold his Olds and made enough for a new Chevy. From here forward, Perkins was a Chevy car guy!

After graduating from high school, Perkins took courses at Baylor then served three years in the Navy. After his discharge from the Navy, he took a low-level job, sorting parts at a Chevrolet warehouse, while completing his college courses. With his Navy experience and eventual degree, Perkins quickly rose through the ranks at Chevrolet in Sales & Service. In the mid-‘70s, he landed a peach-of-a-job working for then GM president, Pete Estes. That’s where Perkins learned the ropes of GM corporate life.

After a few years working for Estes, Perkins was transferred to Buick. Detroit was struggling to come out of the 1970s recession and how to deal with the success of Japanese cars. Perkins was working under Lloyd Reuss and it was a good relationship. “Just In Time” production was a new concept and Perkins was doing many of the management tasks that Lloyd normally would have done, and he loved it! The first two years they set records; then management changed.

The new top guy at Buick was Don Hackworth and it wasn’t a good mix for Perkins. The two men almost immediately started butting heads. On a plane coming back from a business meeting, Perkins asked Hackworth what they could do to have a better working relationship. Hackworth suggested a “foreign assignment” for Perkins. That was IT for Perkins. What Hackworth didn’t know was that Toyota was wooing Perkins for an executive position. The timing was perfect

When Perkins came into Toyota with his “GM top-down” management style, he was nearly stopped in his tracks. The Japanese car companies were all using the “Consensus Process”; which starts from the bottom (assembly workers) and goes up from there. Perkins quickly learned that while the process takes longer, the execution is like a rocket ship; everyone is onboard and you get better solutions.

A year later, Toyota made Perkins Group V.P. for Sales, Marketing, Distribution, Product Planning, and New Ventures. Around this time Japanese car companies announced that they were taking on the luxury car segment of Mercedes and BMW. Mr. Toyoda wanted to prove to the world that they could build world-class luxury automobiles. Toyota formed Lexus and Perkins was a key player.

Then, an extraordinary thing happened; GM wanted Perkins back! Typically at GM, once you leave, that’s it. Perkins learned from his former boss, Lloyd Reuss, that then-GM president Bob Stemple (another car guy!) wanted to talk to Perkins about coming back. When the two men talked, Perkins told Stemple, “There are two jobs I would come back for; president of GM, or general manager of Chevrolet.” Stemple’s reply was, “Well, that’s a little lofty.” Stemple and Perkins continued their conversation for a time before Stemple called Perkins. “OK, big boy, it’s time to put up of shut up. We’ll make you general manager of Chevrolet.”

It had been twenty-nine years since car guy mechanic Jim Perkins started sorting parts in a Chevrolet warehouse. In May 1989 Perkins was made general manager of Chevrolet. He’s always been a Chevy-guy, and now he was running the division. But when Perkins got back, he was in for a shock. Perkins said in a 2014 interview with Motor Trend, “I didn’t recognize Chevrolet when I got back. It had lost its pride. There was so much infighting among sales, marketing, product planning, distribution, you name it. Everywhere you looked was a silo with its own management, and that’s the kiss of death.”

“TCE” Total Customer Enthusiasm had to start at the top, meaning that managers with bad attitudes had to go. Using Toyota’s “Consensus Process” concept, Perkins invited his people to write to him about the problems they faced and possible solutions. Perkins got 1900 letters, read them all, distilled them into to-do lists, and formed employee councils to come up with working plans. A lot got fixed, workers felt their experience mattered and the organization was much happier. The same concept was also applied to the dealer networks.

By 1990 the nation’s economy was moving into another recession and things were not good inside GM. All car lines were being closely reviewed and Corvette sales were in a downward direction. Once again, the car was on the chopping block. According to Corvette designer, John Cafaro, by 1992 the Corvette almost died. People in the company didn’t understand the car and no one wanted to champion the car. Former GM executive Ralph Kramer said, “Many GM insiders considered the Corvette to be a non-essential product in the GM/Chevrolet stable. The thought that the Corvette would NOT just be in the Chevy stable of cars, but instead the main character; the stud-horse; the Secretariat; was totally remote to the Corvette-haters; but how could it not be otherwise?” (Today, the Corvette is THE flagship of GM)

GM’s Mid-size Car Division managed Joe Spielman (also a car guy and Corvette fan) created a task group called, “The Decision Makers”. The group consisted of himself, Carlisle Davis, John Cafaro, and Dave McLellan. The team’s objective was to create a path for the future of the Corvette. They came up with three directions; First: A production version of the 1990 mid-engine CERV-III; Second: The Momentum Architecture, featuring an evolutionary body style, a stiff backbone-type chassis, and a transaxle; and Third: the “Stiffer and Lighter” design which was a lighter and improved C4. The team chose the “Momentum Architecture”. The problem was funding.

In November 1992 Dave Hill took over as Corvette’s chief engineer and had a big problem on his hands; how to prove the concept of the Momentum Architecture when he had no budget. Corvette manager Russ McLean went the Perkins and explained that the Corvette team needed funding for another CERV Corvette (Corporate Engineering Research Vehicle) to prove the viability of the Momentum Architecture concept. Perkins managed to pull $1.2 Million from another budget to allow Hill’s team to build what is arguably the stealthiest R&D Corvette ever, the CERV IV.

The CERV IV was essentially a C5 structure wearing a C4 body. A keen eye would have noticed that it looked like a “l-o-n-g” C4 Corvette, but when the car was on public roads, no one noticed. When Hill took executives for a ride, they all said, “This is like no Corvette we ever felt!” Hill proved to GM’s president, Jack Smith, that his team could reinvent the Corvette, as well as the building process. The $1.2 Million that corporate angel Perkins was able to secure for the CERV IV saved the Corvette! It was something that ONLY Jim Perkins could have done.

In 1996, at age 61, Perkins retired from Chevrolet. In his seven years as Chevrolet’s general manager he rekindled Chevy’s 1960’s-style pride; improved Chevy’s truck production; strengthened Chevy’s role in product development and design; helped his people come to grips with downsizing and reorganization, supervised the Chevrolet Racing Team that won five NASCAR Championships and had six Indy Car victories; and got to drive the pace car at the Indy 500 three times in 1990, 1993, and 1995 (in a Corvette).

In the 2014 Motor Trend interview, Perkins said this about driving the Indy pace car, “You come out of turn four when you’re going to turn them loose, you know you have to make the left turn into the pits, you look down the track, and it looks like everything is closing in on you with all the people and color and movement. You swear you’re going through the eye of a needle. My God, it is such a tremendous, tremendous experience.”

Retirement from Chevrolet only lasted three months when Perkins accepted an offer from Rick Hendricks to take over his company after he came down with leukemia. Perkins stayed on as the CEO and later COO. Perkins said of his time at Hendricks Motorsports, “If ever anything has been rewarding, it has been seeing this company do what it has done. I have no regrets. It’s been a blast, a great, great, great ride.” In 1999 Jim Perkins was inducted into the National Corvette Museum’s Hall of Fame in the GM-Chevrolet Category.

Jim Perkins was a poor kid from depression-era Waco, Texas that liked to work on Chevys. He was described as a “wily, free-speaking, cowboy boot-wearing Texan.” Perkins died on December 28, 2019 in Charlotte, North Carolina. Jim Perkins was 83 years-of-age. Perkins had an exemplary career and most importantly to the Corvette community, saved the Corvette. – Scott