In the history of endurance racing, some entries have notably stood out in sheer importance, and the car being made available here will satisfy the most discerning criteria. We are proud to present to you the 1974 Greenwood Corvette chassis number 002, the ‘Spirit of Sebring ’75,’ the first and most famous of only six Greenwood wide-body race machines ever built.

Moreover, this particular car, powered by the legendary Chevrolet L88 big-block race motor, was John Greenwood’s personal favorite and the only one to be raced as a Greenwood ‘team’ entry (the other five examples were built for customers). Helped by direct GM support for its then-latest IMSA aero-restyling effort, the list of accolades it holds among the Greenwood cars is impressive—most pole positions, most race wins, and most ‘fast lap’ records, plus the overall all-time highest official speed ever recorded by any car at Daytona: 236 MPH. ‘Sebring ’75’ is also the most original of the surviving cars, and was never badly damaged nor in a serious accident.

Developed by John Greenwood specifically for the wide-body structure, it features the Bob Riley coil-over suspension layout on a Ron Fournier acid-dipped full-frame chassis, the only one created this way. A special personal driver’s-seat extension for Mr. Greenwood’s leg is still inside of it and unlike any of the other five Greenwood Widebody race cars, chassis number 002 is fitted with a curved dash. Under the hood was an L88 race motor with a custom Greenwood-specific cross-ram mechanical fuel-injection layout, a key factor in its on-track successes.

This included wins at the Talladega 200 (which was actually taken decorated as car #48 under the control of Milt Minter) and the Daytona Finale in late 1974 to give Greenwood the season IMSA title, plus poles at six events between 1974 and 1975, among them the 24 Hours at Daytona race in 1975 when it set the record speed.

Today, more than $250,000 has been invested in the professional restoration by a noted Corvette shop to race-ready 1975 specifications complete with FIA HTP paperwork; it retains the gearing for the higher speeds it is capable of in both the transmission and differential. Tony Oddo rebuilt the competition-type L88 in this car, a 482 CI powerplant complete with the Greenwood-specific injection layout. The engine made a dyno-proven 718 HP and 678 lb-ft of torque and has seen little run time since completed.

Finally, in terms of provenance, this car has not only a full record of the recent work performed, but an unbroken string of ownership records since Greenwood’s origination; this documentation plus additional quantities of memorabilia are included in the sale. Viewed personally and signed by both John Greenwood and Ron Fournier, Corvette expert Lance Smith has inspected and verified chassis number 002 as the best, most original and complete of the Greenwood wide-body racecars. It has been featured in both books and magazines due to its significance. A significant Greenwood team-campaigned machine that bested even the factory-supported Porsches, BMWs and Ferraris of its day, the John Greenwood-piloted ‘Spirit of Sebring ’75’ offers either the seasoned competitor or determined collector the ultimate opportunity to possess a part of functional Corvette racing history.

We have six John Greenwood art prints available in our Amazon store HERE.

Here are a few of the prints… 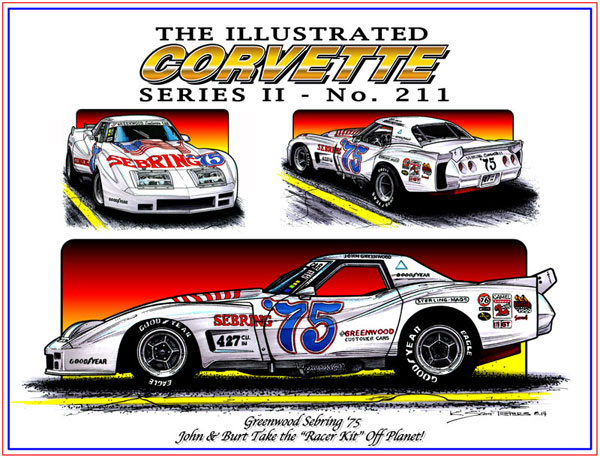 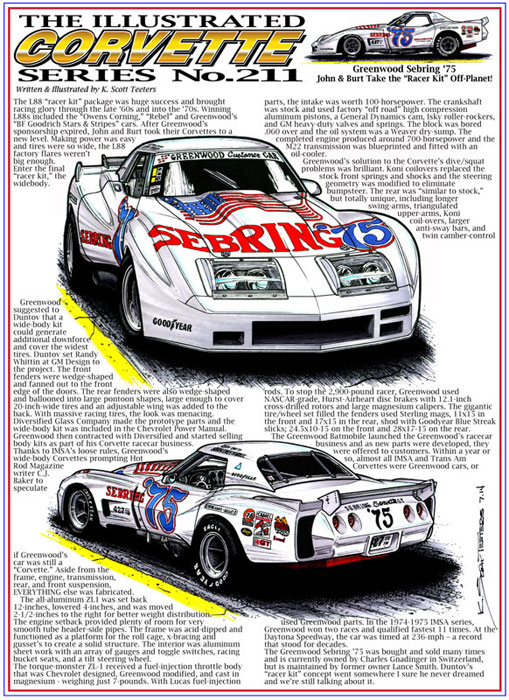 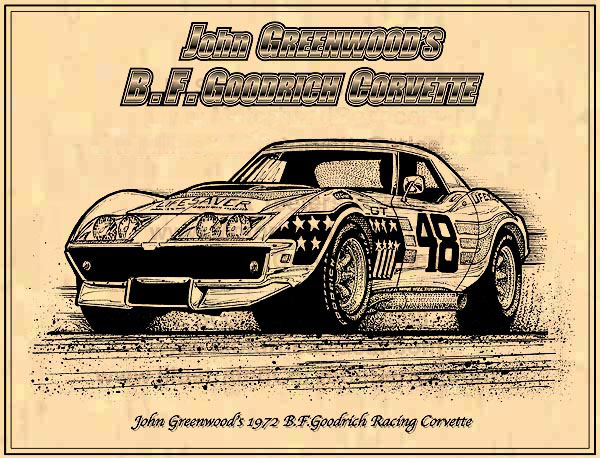 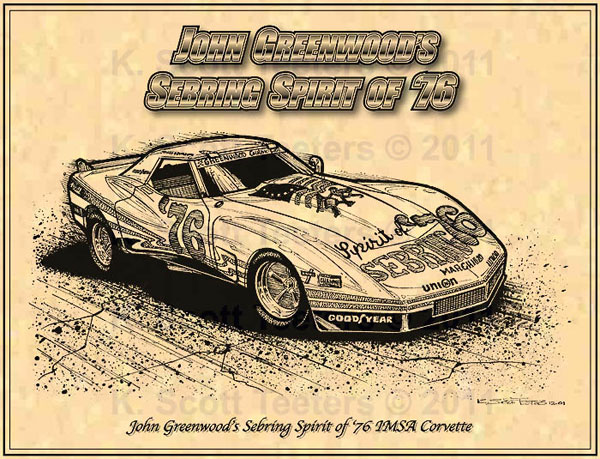