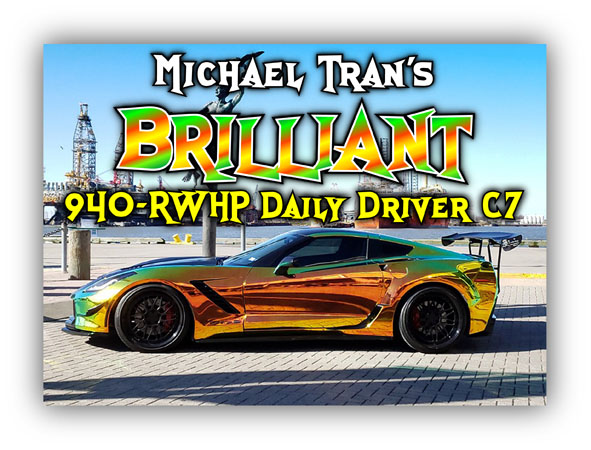 Dateline: 4.21.22 This story was first published in the April 2019 issue of Vette Vues Magazine – Michael Tran, of Baytown, Texas has been into cars since the age of eighteen. For years Tran bought and fixed up a variety of Hondas and BMWs, but in his heart, he wanted a hot American car; not a Camaro or a Mustang; a Corvette!

After his jewelry business took off, Tran started looking for a C6 to fulfill his very specific plans for his vision of a daily driver, supercar Corvette. But when the C7 came out, Tran knew that was the car he wanted. In 2014 Tran purchased a pre-owned Arctic White 2014 Z51 Corvette with black wheels and just 2,000 miles on the odometer. Since Tran knew exactly what he wanted for his Corvette, upon delivery, the car went directly to the shop for what would become a long journey. 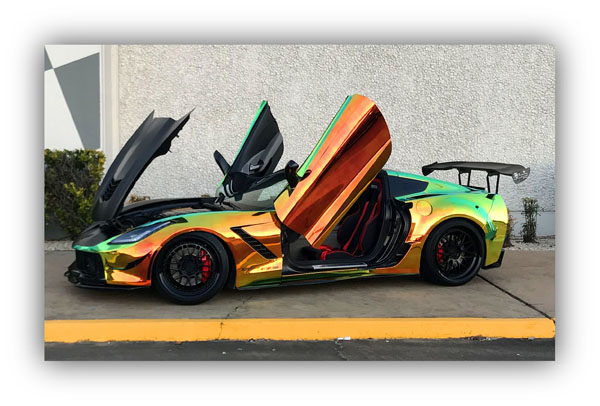 We’ll start with what’s going on under the hood of Tran’s 2014 Corvette so that you understand that this isn’t just a C7 with lots of body flash. The heavily modified, supercharged LT1 engine has been dynoed to 940-RWHP! And that’s without the nitrous system turned on! Factory stock LT1 engines are being built to astonishing levels of horsepower and are proving to be very durable.

Since Tran’s Corvette is a streetcar and not a racecar, the LT1’s stock bottom end and crank are more than enough strong to handle a centrifugal supercharger and an occasional nitrous blast. Nearly everything else in the engine has been upgraded. 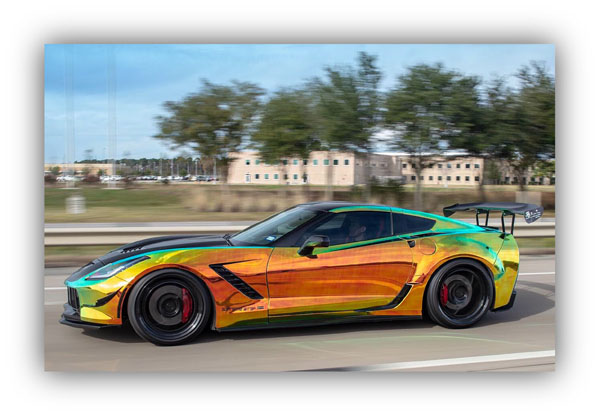 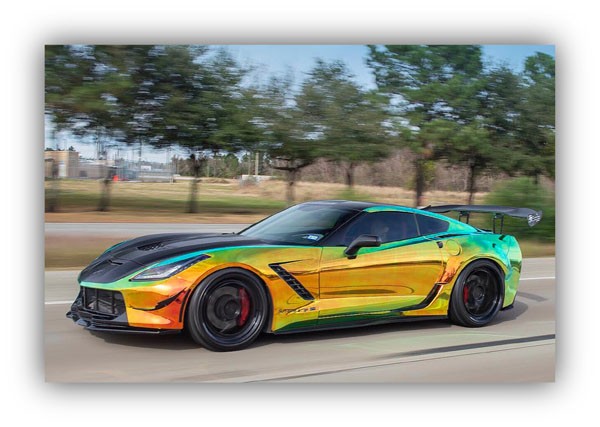 The nitrous-oxide system is a NX Nitrous Express 200 Shot and is good for 200-horsepower. The bottle is located in the center of the trunk area. The system also includes a purge kit. A methanol-injection system allows for more ignition timing, increases boost capability, lowers air intake temperature, and is an additional source of high-octane fuel. Bill and his crew at Xcelerate Street Performance, in Pinehurst, Texas, performed all of the engine work. 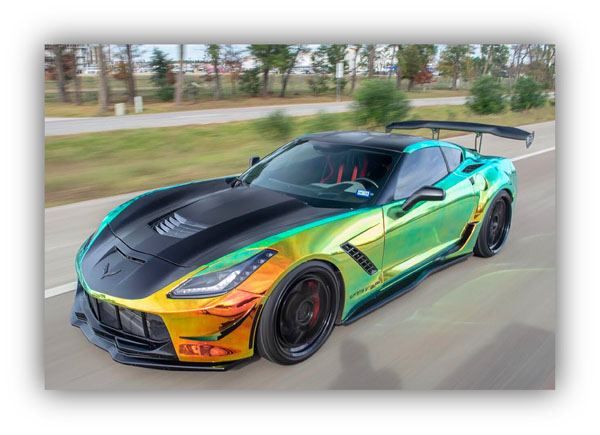 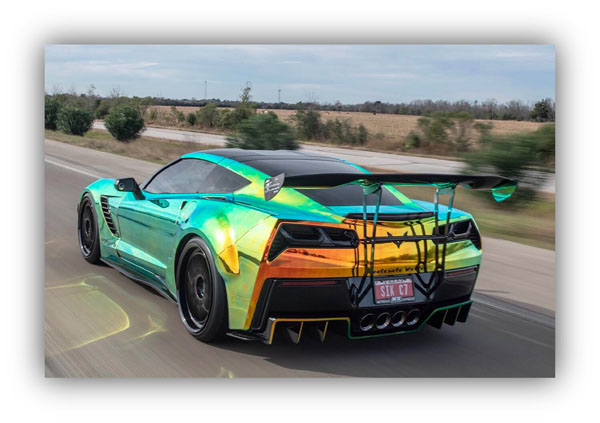 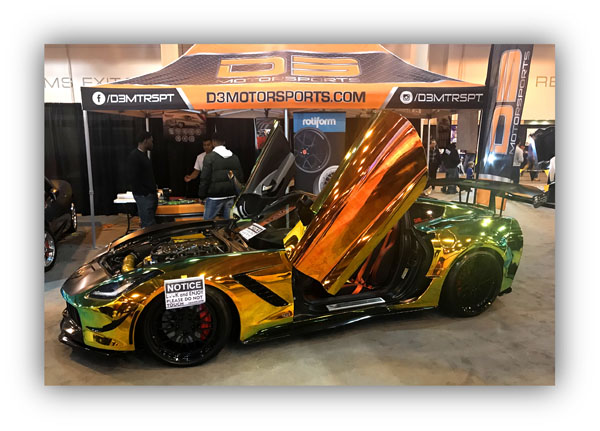 Tran’s C7 Z51 retains the performance gear ratios, larger front brakes (13.6 vs. 12.6”) with slotted rotors. Shocks, springs, and stabilizer bars are stock Z51 parts; as are the heavy-duty engine cooling system, differential, and transmission coolers. On a car with this much power, the extra coolers and larger brakes are a blessing. And lastly, the car was lowered with a lowering bolt kit.

Now, on to the body of Tran’s wild C7. At a quick glance, the car looks like it started out as a Z06; but this is not the case at all. The body kit is from Prior Design USA, in Germany. The fiberglass body kit includes; a unique front bumper cover with the C6 Z06-like leading-edge fake air intake scoop; a front splitter; two front fenders with attaching front canals; side skirts with non-functional rear brake scoops; two rear quarter-panel fenders; a rear bumper cover; and a rear defuser. The rear fenders are ½-inch wider than those on a C7 Z06. On the rear ¾-view photo, note how the rear fenders bulge out and tuck back in. Also, there’s no side marker light in the rear bumper cover. 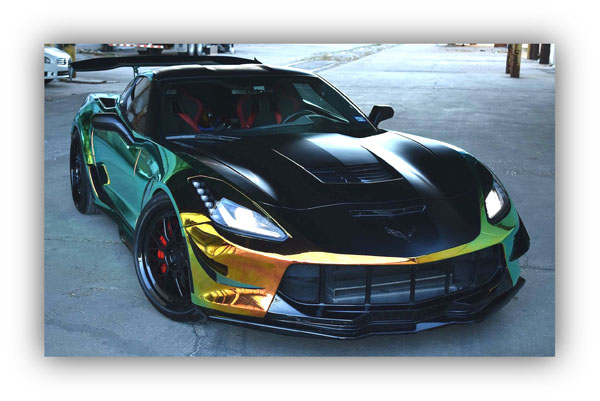 Tran’s C7 had a functioning rear wing several years before the arrival of the C7 ZR1. The “wing” is carbon fiber from APR Performance and the mount is custom-made. The wing and mount protrude the lower valance to the right and left of the license plate and bolts to the inner metal rear bumper. And lastly, while Lambo doors have been around since the 1980s, Tran’s are unique. The Lambo hinges have been modified to not only open vertical but also stock horizontal. Since Tran takes his C7 to area car shows, the vertical doors are always a popular feature. 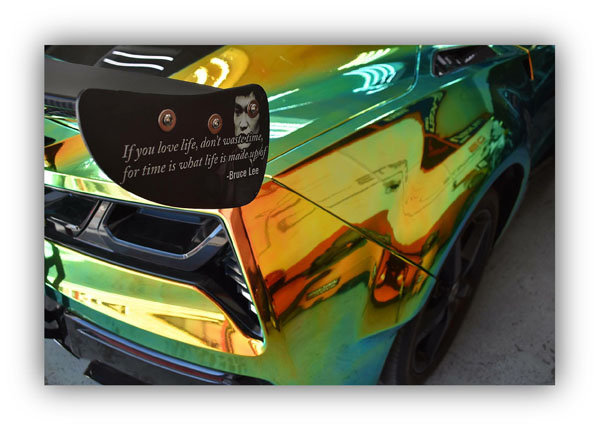 Let’s get into the car’s unique vinyl wrap. We mentioned that the car was originally Arctic White. What we see here is actually the car’s second wrap. The car’s first wrap was brilliant blue-chrome. Any chrome wrap is flashy, but Tran got tired of the blue-chrome look and wanted some more flash, so he opted for Ammolite Gem Neo-Chrome, green-gold wrap. When Bao Deron and Brandon at D3 Motorsport in Houston, Texas performed the wrap work, they removed all of the body panels so that no wrap edges showed. With the doors, hood, and rear hatch open, there are no signs of the car’s original Arctic White paint. 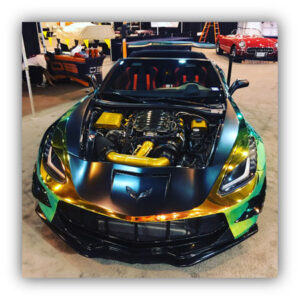 The front splitter, air intake area, top of the front bumper cover, hood, roof section, lower valance area of the rear bumper cover, and rear diffuser are all wrapped in mat black. To accent the diffuser, the rear edges are wrapped with green-gold wrap. Tran reports that the body wrap is very durable, partly because he had the entire body and all four wheels ceramic coated. Tran feels that the exterior of the car gets enough attention, so the only things he changed in the interior were the seats and belts. The all-black interior has Sparco racing seats with a red four-point harness and red floor mats.

The subtitle of this story, “A Dazzling 940-Horsepower Daily Driver”, is no joke. Tran drives his Corvette to and from work at his jewelry store, “Mike’s Jewelry Store” in Crosby, Texas. Since buying the car in 2014 with 2,000 miles on the odometer, Tran has racked up just over 60,000 miles, so it is indeed a daily driver. He also participates in a lot of charity rallies; Austin-to-Dallas-to New Orleans. 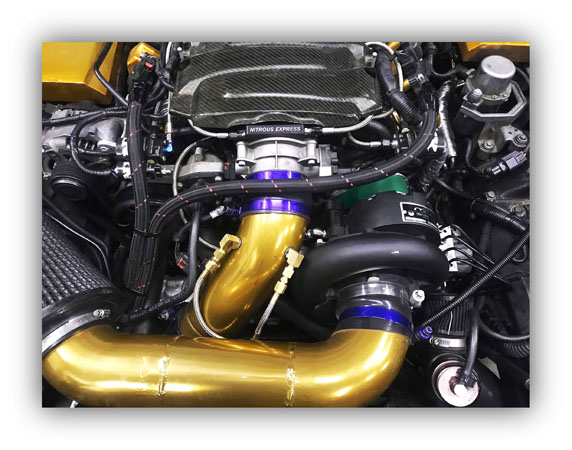 Believe it or not, this is Tran’s first Corvette! When I asked if he has any future plans for the car (typically, cars such as this are almost never “finished”), he confidently answered, “No, it’s completed. I just drive and enjoy the car.”

After many years in the jewelry business, Tran is considering something more in line with his passion for cars. He is looking into becoming a silent partner in his friend’s “D3 Motorsports” shop, specializing in wraps, wheels, and tires. We’ll see if in a few years Tran does something else with his brilliant daily driver! – Scott