by JORDAN CHITTLEY as republished from The Globe and Mail

When a sinkhole opened up underneath the National Corvette Museum in Bowling Green, Kentucky last year, it swallowed the one millionth Corvette that rolled off the assembly line – a white 1992 model.

The fall made the iconic sports car look more like a pancake. Now, after more than four months and 1,200 man hours the restoration is complete.

“We felt it was important to restore this extremely significant car in Corvette’s long, storied history,” said Mark Reuss, GM’s executive vice president, in a statement. “When we disassembled it, we found that each employee involved in building it had signed part of the car, which was fantastic and moving to see. It brought the history to life, and reinforced the importance of the project.”

Only two of the signed components could be saved, so the craftspeople scanned the autographs and printed them on the replacement parts. The hood, front fascia, front wheels, doors and a number of components under the hood were all replaced. 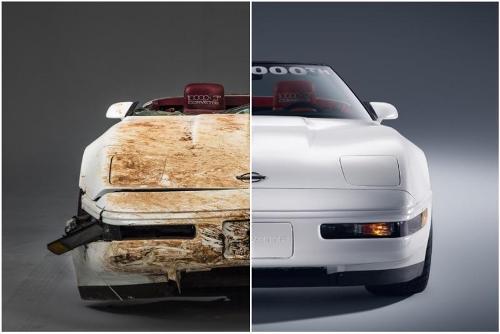 Security cameras captured the sinkhole swallowing the eight Corvettes on Feb. 12, 2014. The museum’s video on YouTube and has been viewed more than 8.5 million times. The sinkhole, measuring 14-by-18 metres and nine metres deep, pulled down the floor of the museum’s Skydome area.

Five of the eight damaged cars are to remain in “as-recovered state” and be displayed at a sinkhole-themed exhibit. They are:

The 1.5 millionth Corvette and Mallet Z06 were the last cars pulled from the sinkhole, on April 3 and April 9 last year. GM says they were buried, and it took a while to find them.

The Story in photos. Courtesy of Chevrolet.com: