The photo above is actually a 2006 Corvette (not the prototype). 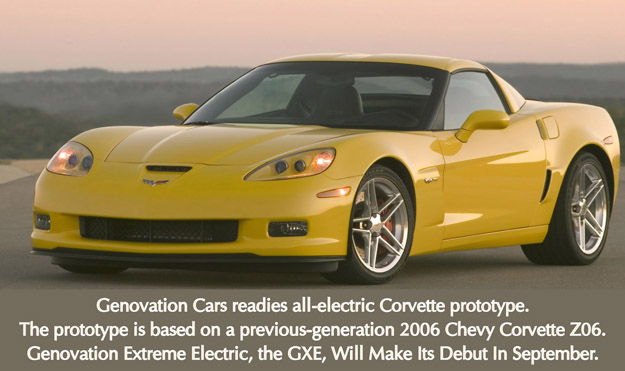 by Noah Joseph as republished from autoblog.com

Dateline: 7-15-15 Chevy runs the full spectrum from some of the most environmentally friendly cars to the least. At one end are EVs like the Spark and Volt. At the other, performance models like the Camaro and Corvette. But one American company wants to bridge that divide.

That company is Rockville, MD-based Genovation Cars, which reports that it is almost done building its prototype for an all-electric Corvette. Dubbed the Genovation Extreme Electric (or GXE for short), the prototype is based on a previous-generation 2006 Chevy Corvette Z06, but ditches its enormous 7.0-liter V8 for an array of inverters, batteries, and electric motors said to be good for over 700 horsepower and 600 pound-feet of torque.

That promises to deliver a 0-60 time of about 3.0 seconds and a top speed in excess of 200 miles per hour. Those are supercar benchmarks for performance if we’ve ever seen them, and ought to leave even the top-spec Tesla Model S P85D in… well, not a cloud of smoke, but whatever the electric equivalent is, in a non-polluting cloud of that.

The GXE is also supposed to be able to travel for 150 miles on a single charge, and handle well while it’s at it with 50/50 front-rear weight distribution and a low center of gravity. Sorta like the Power Wheels ‘Vette pictured above, then, but bigger and faster. Look for the GXE to debut at the Electric Vehicle Technology Expo this coming September in Michigan, after which Genovation says it will put the GXE to the test on the track to back up its performance claims. 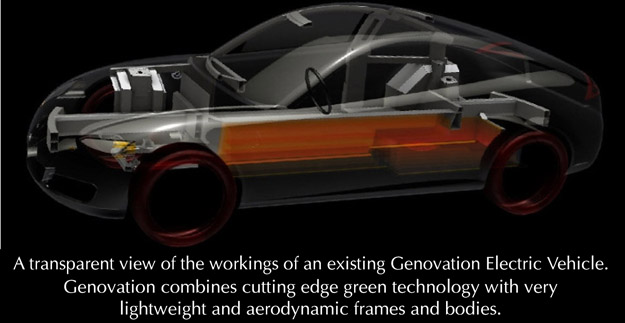 ROCKVILLE, Md.–(BUSINESS WIRE)–Genovation Cars is nearing the completion of a prototype high-performance all-electric Corvette called the Genovation Extreme Electric or GXE. Assembly of the GXE will be completed by the end of July, followed by a three-week testing phase. The GXE is based on a 2006 Z06 Corvette.

Several contributors to the GXE effort have helped design and build record-breaking electric vehicles. They include an MIT electrical engineer and a mechanical engineer from Cosworth.

“We are using state of the art inverters, batteries and electric motors that will produce in excess of 700-hp and 600 lb-ft of torque,” said Genovation CEO Andrew Saul. “We expect the car to achieve 0-60 mph in around three seconds and have a top speed of over 200 mph. And, most of the parts are designed and built in America.”

The car will have a range of 150 miles during normal driving operation and will have a near 50/50 weight distribution while being optimized for a low center of gravity. The goal is to retain all the creature comforts that were originally powered by the stock vehicle’s combustion engine; for example: power steering and power brakes, air conditioning and heating.

After testing is complete, the car will be taken to various raceways with the goal of setting lap records for a street legal electric car. An attempt to break the top speed record will be made this fall. The current record is 177 mph set by a Finnish prototype car last summer.

Genovation is also announcing that the GXE will be on display in Michigan in mid-September at the Electric Vehicle Technology Expo, a very important trade show in the world of electric vehicle engineering.

Genovation was founded in 2007 by Mr. Saul, president and CEO. Other top company executives include Steven Rogers, president and chief technology officer and Robert Irby, chief of manufacturing and operations.

Genovation develops, designs and builds advanced green vehicles. Genovation’s objective is to provide its customers with safe, sustainable automobiles that do not compromise their driving independence.