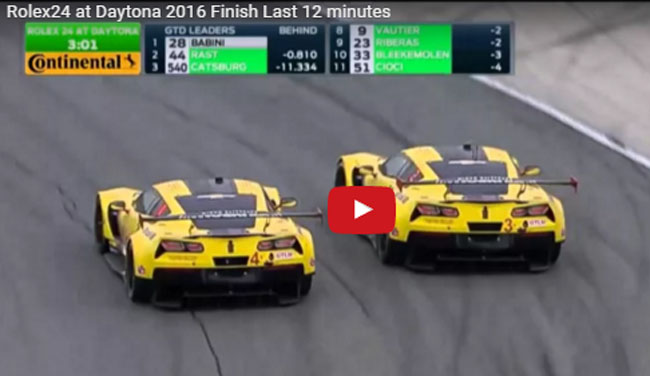 by Chris Perkins as republished from RoadandTrack.com
The last 15 minutes of this 24-hour race was some of the tightest racing we’ve ever seen

Dateline February 2, 2016: After the two Corvette GTLM cars got around the class leading #912 Porsche 911 towards the end of this year’s Rolex 24 at Daytona, Corvette Racing Program Manager Doug Fehan gave his drivers permission to race each other. What followed was the most spectacular 15 minutes of racing many have ever witnessed.

The #4 car, driven by Oliver Gavin, was in the lead, but the #3 car, driven by Antonio Garcia was on a fresh set of tires. Garcia chased Gavin hard, attempting NASCAR-style drafting passes on his teammate.

The announcers for IMSA Radio are flabbergasted: They’ve never seen racing like this, especially not after 23 hours and 45 minutes of continuous, grueling racing.

All the while this GTLM madness is going on, another battle is raging in the lower GTD class between the #44 Audi R8 driven by Rene Rast and the #28 Lamborghini Huracan driven by Fabio Babini. With less than 10 minutes of racing left, Babini whizzed by Rast, who was trying to save fuel.

Then, with only three minutes left, Rast caught and passed Babini who had run out of fuel. Just seconds after Rast took the GTD lead, Garcia passed Gavin going into turn one, but ran wide, allowing Gavin to reclaim the GTLM lead.

Gavin kept Garcia in check, though not by much. The final gap between the two Corvettes? Just 0.034 seconds. Rast held his lead all the way to the checkered flag, just barely holding off the #540 Porsche 911 of Black Swan Racing.

Truly, this was one for the history books, and thanks to the magic of YouTube, we can relive it over and over again.