Dateline September 2015. From ALMSOfficialVideos on YouTube about 5 years ago- Interview with Dick Guldstrand. Dick Guldstrand commemorates 50 years at Le Mans for Corvette. He even shares the secret for the Mulsanne Stain!

September 2015 -“The Corvette world has lost an influential figure within the community with the news of Dick Guldstrand, nicknamed “Mr. Corvette”, passing away at the age of 88 years old.”

From CorvetteMuseum on YouTube. The article on the YouTube page from 2013: When it comes to driving and developing high-performance vehicles, the international achievements, accolades, and reputation of Dick Guldstrand make it impossible to place him anywhere but at the very top. Well-known for his chassis expertise and success on road racing tracks since the 1960s, Guldstrand has come a long way from the young man who started out in pursuit of a career in law at the persuasion of his parents.

“My parents wanted me to be a lawyer, but somehow I ended up in electronics in college,” Guldstrand said. Even though he was working in the financially rewarding aerospace industry, the native Californian knew his heart was “about 500 feet out in the parking lot pinned on a tattered ’56 Corvette.” Guldstrand, who had begun racing on the famous Southern California dirt tracks in the late 1950s, knew he had to listen to his heart. Racing was calling.

He soon landed a sponsorship from H.E. Baher, a Hermosa Beach, California Chevrolet dealer. His Corvette outfitted with fuel injection and a 4-speed was an immediate winner. Under the Baher banner, Guldstrand won most of the West Coast BP events in the early 1960s. His sponsor was so pleased, he bought Guldstrand one of the first Stingrays to race in the fall of 1962.

Beginning in 1963, the racing and development exploits of Dick Guldstrand became the stuff of legends. From 1963-1965, he won three consecutive SCCA Pacific Coast Championships, including the Southern Pacific A/P Championship in 1964, the same year he was named the California Sports Car Club Driver of the Year. In 1966, Guldstrand won the GT-class at the Daytona 24-hour race, and finished 9th overall. Later that year, he was named President of the Southern California Drivers Association. The following year, he raced at Le Mans and set a track record in the GT-class while leading the race for 13 hours. In both 1966 and 1967, Guldstrand drove the legendary Grand Sport Corvette at the 12 hours of Sebring for Roger Penske.

Dick Guldstrand played an enormous role in the development and testing of the 1985 Corvette. He set new track records at the Mid-Ohio 24 hours, finishing both 1st and 2nd overall. He also set new track records at the 12 hours at Willow Spring for enduro cars, once again finishing 1st and 2nd overall. His personal involvement, along with his GSS race team, set the stage for the future racing series, as well as Corvette’s domination of Porsche cars for the first time in fifteen years. The following year, he built and set up the Guldstrand 1986 Corvette, which made a clean sweep of all events at the SCCA National Solo Championships. Later that year, Guldstrand developed his high performance dream car, the GS-80. Articles about the GS-80 have appeared in virtually every automotive magazine, and the car has received world acclaim. It was set against such high performance cars in Europe as the Testarrossa, Countach, and Porsche Turbo. Then in 1987, Guldstrand, driving a 1956 Corvette in the Vintage Race series, won the 75th Anniversary of Chevrolet at Monterey, California. The legend of Dick Guldstrand only grew more.

Dick Guldstrand continues to be one of the true innovators in the present decade. The 1990s began with the announcement that he was developing the Guldstrand Grand Sport 90. A world-class exotic supercar based on the Corvette ZR-1 chassis, the GS-90 sported an entirely new body along with major upgrades to its engine, suspension, wheels, tires, and rear end. The finished product debuted on the Chevrolet stand at the 1994 Los Angeles Auto Show, and is produced today on a build-to-order basis.

From Matt Sweeting’s Power Brake TV on YouTube about 2012. 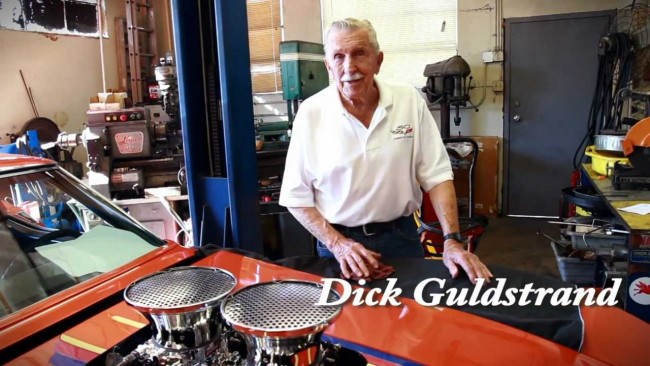 BY SEAN SZYMKOWSKI as republished from GM Authority

The Corvette world has lost an influential figure within the community with the news of Dick Guldstrand, nicknamed “Mr. Corvette”, passing away at the age of 88 years old.

Guldstrand became a prominent figure in Corvette culture, spending much of his life piloting Corvette racers throughout the 1960s. He also worked as an advisor to a number of Hollywood motorsports films, including 1967’s Grand Prix.

After his motorsports career, Guldstrand spent quite a bit of time with the C4 generation Corvette, engineering race-winning builds, exemplified by his 1986 Guldstrand Corvette, which went on to win ever single SCCA National Solo Championship event that year.

Another notable achievement include being one of the first National Corvette Museum Hall of Fame inductees in 1999, where he will remain enshrined forever, and remembered by Corvette enthusiasts of all ages.

We will remember his contributions for years to come.