by Scott Teeters as republished from CorvetteOnline
Graphic By Corvette Online. Photos – Scott Teeters
Imagine this black Vette on the white sand coming to bail you out!

Dateline 02.20.16: We first saw Dewey Powell’s menacingly ‘81-bodied Corvette at the Strictly Corvettes Show, in Atlantic City, New Jersey. One of the first things that caught our eyes was the stylized fishing pole rack and the way it was angled back from the middle to match the car’s nose. Then the tall tires and L88 wheel flares hit us. “WOW! What’s this?” We looked under the hood and saw a dual-quad 392 Hemi and wondered, “Who built this?!”

Dewey was completely relaxed in a lawn chair, wearing jeans, black cowboy boots, a black t-shirt, and wrap-around shades. We could tell that he was “the guy.” We asked him if this was indeed his car and if he had been responsible for the build. “Yeah, that’s right, and I drove it here today. You should have seen it yesterday, it was covered with sand.” Ladies and gentlemen, we had just met Ocean City’s local legend, Dewey Powell.

Yes, the fishing pole and surf fishing rack on the front are real. When you live half a block off the beach, you fish!
Dewey is an old school guy with gasoline in his veins. He started out working at his Dad’s Esso gas station and by 1945, Dewey was drag racing at the local 1/8th-mile track with his Chevy-powered Model A pickup. Dewey’s uncle owned Powell Speedway that became Pleasantville Speedway, and finally, Atlantic City Speedway. The racetrack is long gone but Dewey is still powering around. 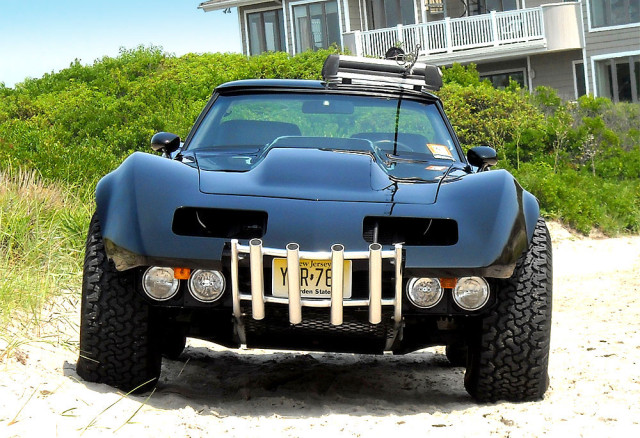 Dewey’s 4WD Corvette is classic “garage engineering.” When he bought the ’69 Corvette in ‘76, the car was setup for drag racing with a turbocharged LS6 454ci. The original body was completely shot, but a friend had a body from an ‘81 Corvette for the right price. With the car completely stripped and a new body waiting, Dewey set about building his 4WD Corvette. Since the front-wheel drive unit was coming out of a Cadillac Eldorado and a transfer case was to be mounted behind the transmission, Dewey needed an engine that is shorter than a big-block Chevy. Dewey had raced Hemis before and thought, “Why not!”

The Chrysler 392 Hemi was a TIGHT fit! The 392ci is shorter than a big-block Chevy and still had to be set back 3-inches to clear the front suspension and radiator.

The 392ci Hemi is out of a ‘58 Chrysler New Yorker. With a Turbo 400 and an 1,800 rpm stall torque converter, Dewey’s cast iron engine, trans, and 4WD transfer case weighs around 1,000-pounds. The 392ci has 10.5:1 compression and uses a .490-lift hydraulic lifter with stainless steel valves. Edelbrock carbs sit atop the aluminum intake manifold, the only substantial part on this engine that’s not cast-iron. The three-inch side-pipes are hand-made and use Cherry Bomb glasspacks. 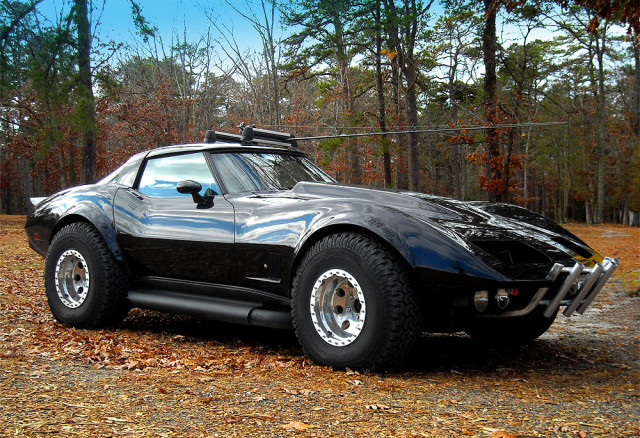 Dewey handmade the black side pipes. Cherry Bomb glass-pack mufflers tone down the 392 Hemi – a little! Driving the front wheels is an interesting collection of parts. The front-wheel drive unit is from a ‘70s Cadillac Eldorado and includes the frame, front suspension, spindles, brakes, and steering box. Each front axle was custom made. A Jeep transfer case is mounted behind the transmission with a one-piece drive shaft running to the stock rear, and a two-piece drive-shaft running to the front differential. The front suspension uses coil over shocks and a power steering unit from an Eldorado. The stock rear suspension has stock car racing heavy-duty shocks and a factory mono fiberglass rear spring.

The rear bumper cover took a minor hit, so while Dewey was repairing the cover, he made the rear spoiler, just for a little added attitude.
The 392ci had to be set back three-inches to make room for the front clip and radiator, so Dewey made the new firewall out of .040-gauge steel. A stock car racing aluminum radiator keeps the Hemi cool and just ahead of the radiator is the power steering cooler. Dewey uses 33×12.50R15 BFGoodrich Off Road T/A tires on 11x 15 Ion Beadlock Wheels.

Zora Arkus-Duntov never imagined that his racer kit L88 fender flares might be used on a 4WD Vette. The look is perfect!
To accommodate the big tires, L88 road racing flares were grafted onto the front and rear fenders and a domed hood was needed to clear the Hemi’s dual-quads. The headlight buckets are from a Chrysler Imperial and the surf fishing rack doubles as a bumper. The original ‘81 rear bumper cover was shot, so Dewey used a ‘74 – ’79-style bumper cover and the rear taillights are LEDs. The rear spoiler is hand-made. Since this is a daily driver and beach machine, the roof rack is a permanent fixture so Dewey can fish whenever he can. With eight coats of Imron black paint and no badges or graphics, the car looks totally sano!

At first glance, the interior almost looks stock – except for the racing gauges, tin work, and 4WD shifter mounted on the passenger side of the transmission hump.

The interior shows Dewey’s dirt track background. Flat racing gauges mounted on sheet metal replace the stock speedometer and tachometer. The dash center section has oil pressure, water temperature, amp meter, and fuel gauges mounted on sheet steel. The center console top is sheet metal with toggle switches that control windshield squirters, wipers, extra fuel pump, fan, power windows, heater, and A/C. The extra shifter to the right of the console is the 4WD shifter. The Jersey shore can be tropic-like in the summer and arctic-like in the winter. Dewey drives the car all year around, so he installed a hot rod, heater/air-conditioner unit that’s mounted under the dash. Since power comes from a ‘58 Chrysler Imperial 392ci Hemi, Dewey decorated the horn button with the Imperial’s bird emblem.

Dewey looks like he could have been an extra in the movie, “On The Waterfront”. His friend is Scott Mackay from Voorhees, New Jersey. Scott’s daily driver is a supercharged 2006 Corvette roadster with a ZR1 wide-body kit.
Dewey’s other passion is surf fishing, so he built his Corvette to be able to easily navigate the soft white sand of The Jersey Shore. Dewey regularly pulls cars and trucks out of the sand when vehicles are permitted on the beach. Dewey smiles and says, “Yeah, you should see the look on their faces when I come up the beach in this thing. First they hear the sound of a big truck, then this black Corvette cones around the bend. The car is stout and can be run very hard.”

Powell’s 392 4WD Corvette is a non-stop work in progress. As of winter 2016 the car is wearing black steel wheels while Dewey contemplates his next move. He’s considering installing an electric motor in place of the 392, or maybe keeping this car “as is” and building another 4WD Vette, but this “next project” being powered with a big torque-y electric motor! 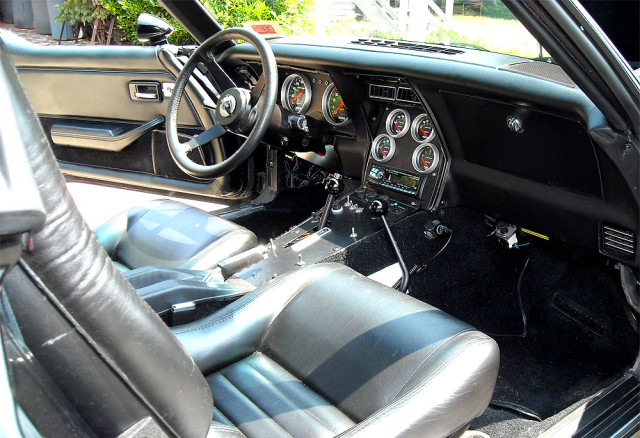 Dewey often gets three questions; 1. “Is that really four-wheel-drive?” (Yes), 2. “What’s under the hood?” (a 392 Hemi with dual quads), and 3. Is it for sale?” Dewey has owned this 4WD hot rod Corvette for almost 40 years and has over 190,000 miles on the car. So if you’re out on the beach in Ocean City, New Jersey and your SUV gets stuck in the beach sand, look for the black Corvette – that’ll be Dewey Powell. Dewey says, “Yeah, I’ll pull their sorry butts out’a the sand…with a Corvette!” Dewey just loves to get sand all over the car. And the answer to question number three is a definite, NO!