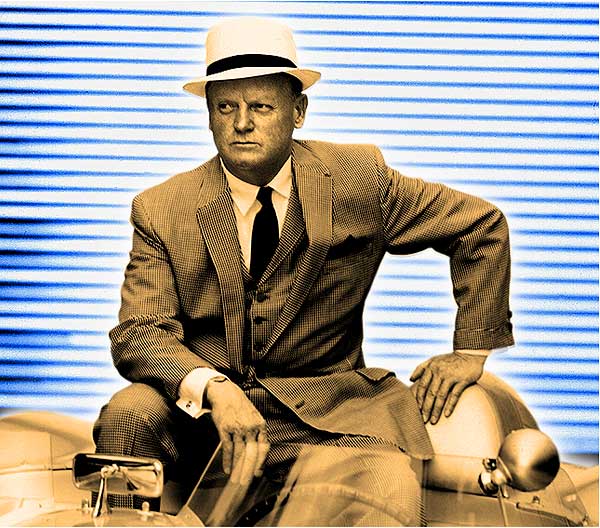 When Harley Earl’s XP-122 “Corvette” debuted at the 1953 GM Motorama, the clean design was way ahead of cars of the day. The look reflected Earl’s style; long hood, low, and rounded – a simple yet beautiful design. Earl was five years away from retirement and had already handpicked his replacement, William L. Mitchell. Bill learned the corporate ropes from Earl, and while a faithful lieutenant, had his own unique style that completely changed the look of the Corvette.

One of Mitchell’s famous quotes is, “I got gasoline in my veins!” Mitchell’s father owned a Buick dealership, so Bill grew up surrounded by cars. Born on July 2, 1912 in Greenville, Pennsylvania, as a kid Bill was always drawing cars. His father sent him to Carnegie Tech to learn to draw something besides cars, but it didn’t work. After college Bill got a job at Collier Advertising as an office boy, went to night school for art, and quickly worked his way into the art department. Still “drawing cars”, Bill befriended Sam, Miles, and Barron Jr. Collier with the common interest in, you guessed it, cars.

On the weekends Bill would hang out with the Colliers at their Tarrytown, New York estate, between the Rockefeller and Stillman estates. The guys had a blast roaring around the grounds in MG sports cars. The Collier brothers were so into racing, they started the Sports Car Club of America, and their pal Bill was their official illustrator. Walter Carey, an industrialist and friend of Harley Earl, saw some of Bill’s illustrations and asked him if he ever considered designing cars. Bill answered, “No.” Carey suggests Bill send him some illustrations to forward to Earl. This was the summer of 1935 and by December, Harley Earl hired Bill Mitchell to work as a designer at General Motors. Bill would work for GM until he was 65 years old.

Bill was a natural and a quick learner. A year later, he was in charge of the Cadillac studio! Through the 1930s to the mid-1950s Mitchell created the 1938 Cadillac Sixty Special, the 1949 Cadillac Coupe DeVille, the 1955-1957 Bel Airs, and many other now-classic cars. Mitchell got along very well with Earl and was never on the receiving end of an Earl’s volcanic dress-downs; Bill knew how to “go-along to get-along.” Mitchell liked Earl’s Corvette and since he knew that Earl’s design kingdom would soon be his, had his own vision for a future Corvette.

On May 1, 1954 Mitchell was promoted to GM Director of Design, but still under Harley Earl. To save the struggling Corvette, Earl was directing the next Corvette based on his Olds “Golden Rocket” Motorama show car. The new designs were classic Earl: very rounded, with a bulbous top, a split rear window, and fins. But GM decided to drop Earl’s new concept to reevaluate the Corvette.

Meanwhile, Mitchell’s group was working on what would later be called the “Q-Corvette”. Upon his arrival back from the 1957 Turin Auto Show, Mitchell gave design studio manager, Bob Veryzer’s team photos from the show, with instructions that he liked the bulging fenders and sharp beltline of the Abarth 750 and the Abarth Alfa 1000 streamliner. Mitchell was looking for something new and different. He told the group of designers, “I want this form to be a complete breakaway from what we’ve seen around here in the past.”

Peter Brock was part of the team and was the youngest designer ever hired by GM. Brock described Mitchell as, “… garrulous, rather extroverted and often profane when he wanted to emphasize a point. Mitchell made sure everyone knew he was the boss, but still loved being “one of the guys.” Mitchell closed out his informal meeting saying, “I’ll be back in a few days kids; show me what you’ve got.” The young designers created dozens of sketches with Mitchell keying in on a Peter Brock sketch. The design process went around and around, yet each time Mitchell came back to Brock’s drawing, which eventually became XP-87, the Q-Corvette, which eventually became Mitchell’s 1959 Stingray Racer, but as a roadster.

Mitchell’s Stingray Racer was another chapter in his feisty career. After his promotion to VP of Design and despite GM’s racing ban, he indulged himself by “buying” the mule chassis of the 1957 Corvette SS, and had his guys adapt the Q-Corvette body to the chassis so that he could go racing. In a large meeting, GM president John F. Gordon said, “I thought everyone knew we were out of racing.” Later Mitchell asked Gordon, “Were you talking about me?” Gordon replied, “Damn right I was!” Mitchell asked. “Do I have to quit?” Gordon snorted, “You’ve got to quite right now!” Bill wrote Gordon a letter explaining that he got his job from racing, because that’s what he did – like a doctor going to conventions. Later Mitchell asked Gordon if he’d read the letter and Gordon replied, “I sure as hell did. You’re a good salesman. You can go ahead. Keep it off the property and spend your own money.” Yes, Bill dodged a bullet! Mitchell raced the car for two years and won a championship with no external marking besides, “Stingray”. The fan response was so intense; the next Corvette had be the Stingray.

1963 was a banner year for Bill Mitchell’s cars, as the Sting Ray and his “personal luxury car” the Buick Riviera both arrived. Like the Sting Ray, Mitchell didn’t lay down a single line himself, he knew what he wanted and gave direction until he saw what he was thinking. His instructions for the Riviera were that he wanted to combine a Rolls Royce with a Ferrari. That interesting mix turned into another Mitchell classic.

As soon as the 1963 Sting Ray released, Mitchell got started on the next new Corvette. When he brought in his team of advanced designers, lead by Larry Shinoda, he told them he wanted, “…a “narrow, slim, selfish” center section and coupe body, a prominently tapered tail, an “all of one piece” blending of the upper and lower portions of the body, and prominent wheels with protective fenders that were separate from the main body yet grafted organically to it.” While that sounds obtuse, it does describe the Mako Shark-II. When the Mako Shark-II was shown to management in April 1965, it was unanimous, the next Vette had to be the shark. Outrageously, they wanted it as a 1967 model.

Bill Mitchell’s personality was as intense as his designs. Mitchell didn’t hold division general managers in high esteem, and he hated engineers trying to be designers. He once told a general manager, “I don’t tell you how to make your car or run your plant. Keep your damn nose out of design.” Bill didn’t like smaller cars and once said, “It’s hard to tailor a dwarf.” Mitchell detested focus groups and committees and said, “You can’t design by committee. You have to say, “This is what I want to do.” On the same topic, he said, “Frank Lloyd Wright did not go around ringing doorbells asking people what kind of houses they wanted.”

Many that worked with Mitchell admired him greatly. Designer Roy Lonberger described bill as, “The most authentic man I ever met. His focus never changed, his design vision was laser clear. He changed designs with complete responsibility to design a car. He delegated responsibility, but never abdicated his own. You always knew where you stood with Mitchell because he told you.” Larry Shinoda got along wonderfully with Bill, but Duntov, now so well. They had a famous blowout when Zora came into Bill’s studio complaining about the Sting Ray’s split window. Incensed that a lowly engineer would demand he change his design, a shouting match ensued. Mitchell called Duntov “Zorro” and Duntov called Mitchell a “red-faced baboon”! Duntov was persona-non-grata in Mitchell’s studio for a long time. Designer Robert Cumberford said, “I liked him because he was enthusiastic about things, but he could be crude and vulgar.” Chuck Jordan, eventual VP of Design said, “He certainly loved women. Bill once told me, “If God made anything better than a woman, he kept it for himself.”

When Mitchell retired in December 1977, GM’s upper management decided that never again would they allow a VP of Design with so much power. Mitchell’s successor, Irv Rybicki was totally unlike Bill – some called him a “Yes Man” claiming that’s why 1980s GM’s cars were so boring. A few years before his death in 1988, Mitchell has this to say about the C4 Corvette, “That square box is pretty near plastic… the instrument panel – Dracula’s dressing room… it rides like a truck… it isn’t a style car, it’s an machine car… engineers are running it. Earl would never let that – I would never let that happen, and I condemn the guys for it!” He also said, “My time is over.” Fast forward to the Tom Peters C6 and C6 design era and I believe Bill Mitchell would approve. – Scott

Here’s Elvis Presley and the 1959 Stingray Racer from the 1967 movie “Clambake”.