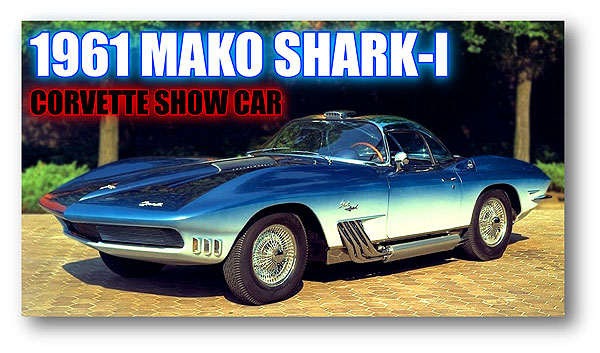 Dateline: 8.7.19 – Photos from GM Archives – Upon Harley Earl’s retirement in 1958, William L. “Bill” Mitchell took over the reins as V.P. of General Motors Design. Earl hired Mitchell in 1935 and Bill essentially learned his trade working under Earl’s guidance. Mitchell was a car guy, an illustrator/designer, and came from the world of advertising. Bill was so good, such a natural, that a year after Earl hired him; he was put in charge of the Cadillac design studio! Mitchell got along famously with Earl, which was not an easy thing to do, as the 6”-4” Harley Earl was known to be a tough and intimidating taskmaster! By 1953, Earl handpicked Mitchell to be his successor, but warned Bill that he’d have to prove himself and make his own mark. Earl’s designs were long, low, and rounded. Mitchell’s philosophy was that a car’s lines should be crisp and sharp, like a freshly pressed business suit. 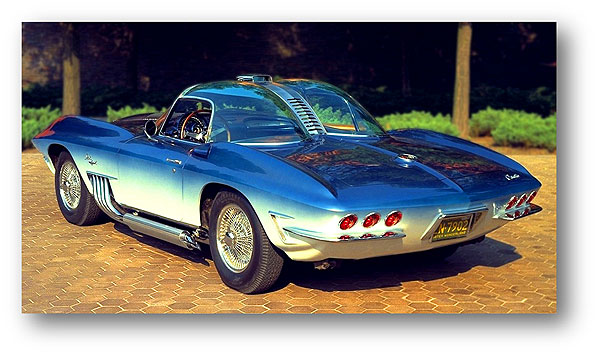 A year before Mitchell was given the keys to Earl’s Design Kingdom; he was tasked with designing a body for the proposed 1960 Corvette that was to be part of Ed Cole’s line of transaxle-equipped “Q-Chevrolet” cars. One of the members of Mitchell’s advanced design team was Peter Brock, the youngest designer ever hired by GM. One of Brock’s sketches was the closest to what Mitchell had in mind, and became the body for what was later called, the “Q-Corvette”. Unfortunately, the Q-Corvette never made it past a full-size clay mockup, as the entire Q-Chevrolet concept collapsed due to the high cost of tooling for the transaxles. But Mitchell couldn’t let go of Brock’s brilliant design. Shortly after Bill’s big promotion, he indulged himself by deciding to “go racing” with the 1957 Corvette SS mule chassis, draped in a roadster version of the Q-Corvette body design. This became Mitchell’s 1959 Stingray Racer.

Bill’s privateer racing effort wasn’t just “an executive at play”; he was testing the public’s reaction to what he had in mind for the next Corvette – HIS Corvette! Mitchell raced the Stingray Racer for two seasons and it was no secret at the track that the car was his. Even though the body of the car looked nothing like the then current Corvette, and didn’t say “Corvette” anywhere, a Fuel Injected 283 “Corvette” engine powered the car, and it was the VP of GM Styling’s car, so the connection was obvious. 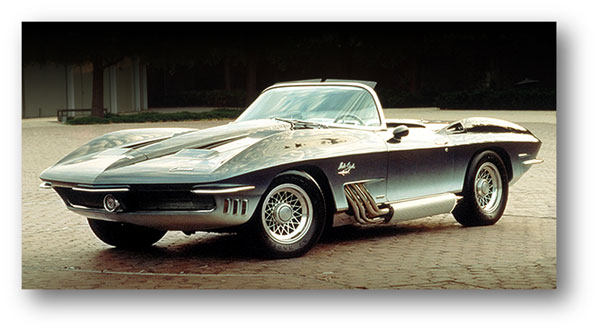 Part of Mitchell’s natural genius was an inner knowing of what the public would like. The public response to the Stingray Racer’s body shape confirmed what Bill knew; the next Corvette would look like his Stingray Racer. Mitchell also understood “show biz” from his time in advertising and through working with Earl on many Motorama events. So, to keep stoking the Corvette and Chevy fans, he created a functional street version of the Stingray Racer. What looked like a prototype Corvette was in actuality another in a long line of teaser show cars. After nine seasons, Corvette lovers were ready for a new machine. The XP-755, aka, the “Mako Shark,” was truly the shape of the future. What Corvette fans didn’t know was that while the Mako Shark was knocking their socks off, Chevrolet was hard at work sorting out the final design of the 1963 Corvette. 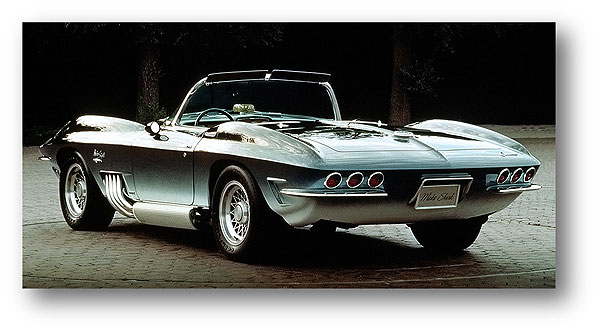 This was no small task, as everything except for the engine, transmission, and brakes were completely new. Except for details such as, vent placement, grille, bumper shapes, and the shape of the coupe’s famous, iconic roof section, the second-generation Corvette was nailed down. Bill’s Mako Shark (the XP-755) was an exaggerated version of the work-in-progress 1963 Sting Ray (XP-720). The Mako Shark was a show car to tease the public, as well as Mitchell’s occasional personal daily driver. Think of cars, circa 1961, when looking at the Mako Shark! There were still cars from the late 1920s and 1930s on the road in 1961! 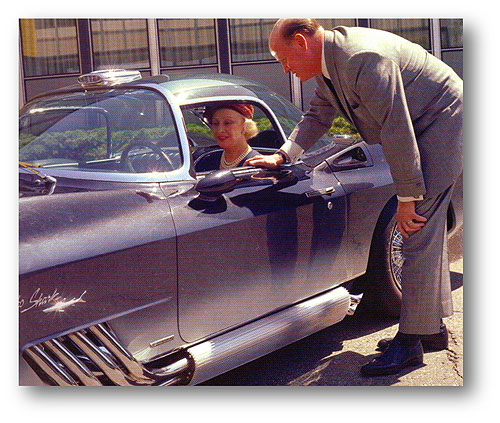 Larry Shinoda was Mitchell’s preferred, go-to stylist guy and seemed to be the best at pulling Bill’s ideas into reality. According to Peter Brock (National Corvette Museum 2017 Hall of Fame inductee), Mitchell was just as tough as Earl, but more jovial and at times profane. Bill just wanted to be “one of the guys”, but he knew what he wanted. (Brock’s book, “Corvette Sting Ray: Genesis of an American Icon” is a MUST READ for all second generation Corvette fans.) Since Larry Shinoda worked out the translation of Brock’s Q-Corvette design into the Stingray Racer, Larry was tasked to do the XP-755, “Mako Shark”. Larry was also working on the XP-720, the 1963 Sting Ray, in its development phase. 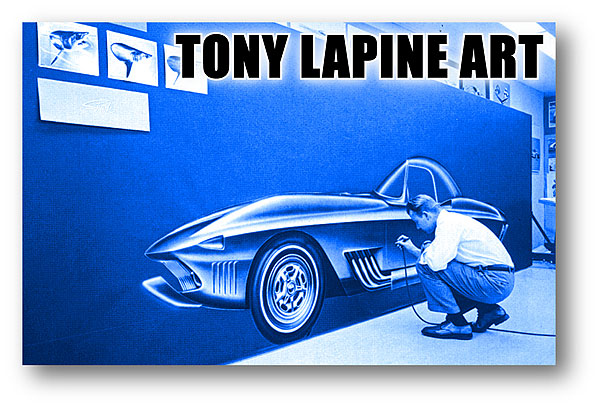 Keep in mind that show cars are supposed to be “over the top”. (Remember the 2009 “Transformers” Corvette Concept car?) Since Larry knew every line on the work-in-progress for the 1963 Corvette, he exaggerated and used older elements from the 1958 XP-800. Starting with a stock 1961 Corvette, the Mako Shark-I’s nose and tail had more “point” than the production Sting Ray would have, and was in fact, the nose was 12-inches longer.

Shinoda knew that Mitchell loved “surface details”, so the Mako Shark-I had lots to gawk at, including; gills in front of the front fender opening, recessed areas on the hood, grille details on the hood, tube header side pipes/mufflers, an XP-800-like bubble top with a periscope rear-view mirror system and grille-vents in the back of the bubble, scoops on the rear fender humps, vents behind the rear wheel well openings, and two pairs of triple taillights. The engine was a 327 with a small, Roots-type supercharger and four side-draft carburetors. Outrageous four-pipe side-pipes exited from each front fender. Originally the Mako Shark had a stock 1961 Corvette interior, except for tight bucket seats and a Ferrari steering wheel that was gift from Enzo Ferrari! Chromed Dayton knock-off wire wheels gave the car that “European look”. 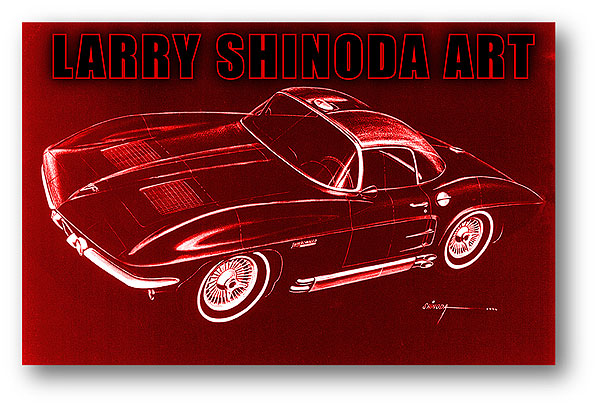 Mitchell’s fertile mind was always expanding upon existing show cars and he had no reservation about pulling a show car back into his design studio for a refresh. Years later, the interior was redesigned with flat panels and gauges that looked very Ferrari-like, a 427 engine with an automatic transmission was installed, and Shinoda-designed alloy lace wheels shod with wide tires were used. The bigger wheel/tire combo nicely filled the wheelwell openings.

Unlike many of Harley Earl’s Motorama cars that were basically static, full-size model cars, Mitchell felt that his show cars should be fully functional vehicles, capable of being driven and shown off in public. As much as the completed 1963 Sting Ray is an iconic classic, I believe that if the Mako Shark-I, minus some of the show car pizzazz, had gone into production as the “1963 Corvette Sting Ray” it still would have been a success. Imagine the Mako Shark-I with the Sting Ray roof – that would have been hot! – Scott

A walk on “hallowed ground” of Corvette design.

Dateline: 11.18.17 – My monthly column in VETTE Magazine, “The Illustrated Corvette Series” is now in its 21st year. I’m in the middle of a series I’m calling, “The Corvette’s Founding Fathers” that covers the careers of Harley Earl, Ed Cole, Bill Mitchell, Zora Arkus Duntov, Larry Shinoda, and Peter Brock. Each of these men played a foundational roll in setting the pattern and personality of the Corvette. Without them, the Corvette might not have survived the 1950s.

I’m now working on installment number three, covering Bill Mitchell that will appear in the May 2018 issue of VETTE Magazine and will be out in March 2018. While researching Mitchell END_OF_DOCUMENT_TOKEN_TO_BE_REPLACED