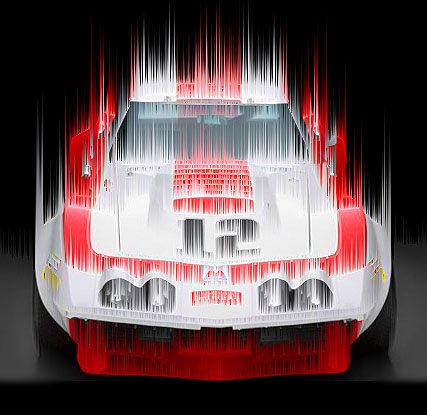 SPECIAL NOTE – Check out the new Owens Corning Corvette Postage Stamp art print at the bottom of this post!

Well I hope that you were able to catch some auction action, live from Monterey, California. High-end auctions, such as the RM and Mecum events draw some of the finest and most interesting cars in the world. For car lovers, these auctions are the proverbial box of chocolates – you never know what you’re going to get.

Last year at the RM Monterey event there were five delightful Corvettes that went on the block – one stocker, a ‘60 Corvette with just 750 miles on the odometer and four Corvette race cars. For Corvette lovers, the star of last years show was the Greenwood Stars & Stripes 1969 427 ZL1 BF Goodrich racer that sold for $580,000.

This year the RM Monterey auction only had one Corvette and WOW, what’a beauty! Preauction estimates predicted that the car should sell for between $950,000 and $1,350,000! “Auctions” are arguably the ultimate expression of the economic free market. Sellers always have an idea as to how much they want for their cars, but when the gavel comes down, it’s the buyers that set the price. Granted, the economic downturn had depressed the prices of exotic cars over the last few years. Some would call it a price correction to rein in the wildly high prices of just a few years before the downturn.

When you watch the car auctions, there are two parts. First, the car is presented on stage with a detailed description of the car with images and sometimes video. Then the bidding action begins. Here’s how the auction action played out. END_OF_DOCUMENT_TOKEN_TO_BE_REPLACED

A BIG weekend for Corvettes on the block!

It’s turning out to be a very interesting weekend for Corvettes at the high-end car auctions, with two big-time events going off at about the same time and area. I checked the RM Auctions website and saw that they have updated their home page and added a “VIEW AUCTION LIVE” link at the top of their homepage. So, they made it easy for us. Auction action starts at 6:60 PM Pacific time (9:30 Eastern Time). If you click the page link before the scheduled start time, all you’ll see is a black box where the streaming video will be. This won’t change until the event starts. After the feed begins, look for the button to Fill Screen, kick back, and enjoy!

But if you love old cars and racing machines, the auction is a treat. Not only do you get to see the numbers ring up, but before the bidding begins, they describe the car, show photos and videos, as well as letting you get a good look at the car on the turntable. Most of the cars at the RM event are really special and have been lovingly restored and cared for. The marque almost doesn’t matter, they’re just wonderful machines. END_OF_DOCUMENT_TOKEN_TO_BE_REPLACED