Dateline: 7.6.17 (VIDEOS AT THE BOTTOM!)  (This story was first published in the January 2016 issue of Vette Vues Magazine).

To understand the importance and uniqueness of George Haddad’s 1969 ZL-1 Corvette, we have to get into the “Vette Vues Time Machine” and go back to late 1968. The December 1968 issue of Hot Rod Magazine hit the newsstands like a thunder clap, with an obviously all-aluminum big-block 427 Corvette engine wearing bright yellow tube headers. It looked like Chevrolet finally had an ace trump card. The 427 ZL-1 was the ultimate “pie-in-the-sky” Corvette setup – big-block horsepower and torque – with the weight of an iron small-block! Duntov was a happy man because his dream of an all-aluminum engine for the Corvette went all the way back to the 1957 Q-Corvette concept that not only called for a fuel-injected all-aluminum small-block engine, but a trans-axle! (Sounds like a C5, doesn’t it?)

Duntov and his team tried casting SBC engines in aluminum, but there was a serious “strength of materials” issue that was never successfully worked out. The SBC was simply not strong enough when made in aluminum. A small batch of all-aluminum 377 engines were developed for the Grand Sport project that were powerful and light, but just wouldn’t hold together in competition. The prospect of an engine lighter than a regular SBC was deliciously tantalizing. So when the replacement for the 348/409/427 W-series (truck) engine, (the Mark IV) was being designed, an aluminum version was an obvious next step because the Mark IV was inherently a more stout structure. 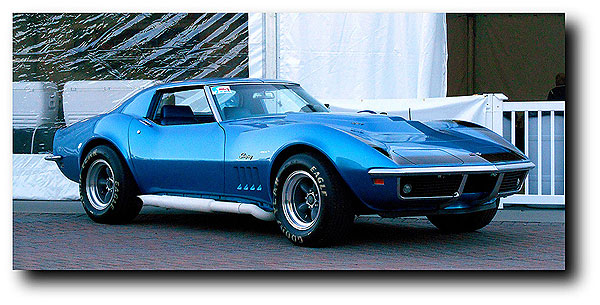 The story of the production ZL-1 Corvettes is a long and complex one that we won’t try unraveling here, except to say that a batch of seven cars were built in early September 1969. The cars that “rolled off the St. Louis assembly line” were full-out RPO-L88 cars. The RPO-ZL-1 aluminum block was an option that was only available on an L88 engine. In other words, the ZL-1 was identical to the L88, except it had an aluminum block – making it 100-pounds lighter than the L88 Corvette, something that only racers would even notice. END_OF_DOCUMENT_TOKEN_TO_BE_REPLACED

Dateline: 2.3.17 – ATTENTION CORVETTE MOTORHEADS! We are officially announcing the next two classic Corvette engines in our NEW Corvette Engine Blueprint Series – the 1967-1969 427/435 L71 and the 1990-1995 LT5. We’re releasing these two engines together because they are arguably two of the most awesome-looking engines to ever live under the hood of a Corvette. The sight of that big, triangular air cleaner on top of that gigantic 427 big-block engine engine provides owners with instant bragging rights. END_OF_DOCUMENT_TOKEN_TO_BE_REPLACED

As you are watching, keep in mind that the shape of the car was worked out almost 50 years ago! And it still is dripping with sexitude. END_OF_DOCUMENT_TOKEN_TO_BE_REPLACED