Dateline: 10.7.11
A Look Back at the Most Common and Overlooked Corvette Pace Car 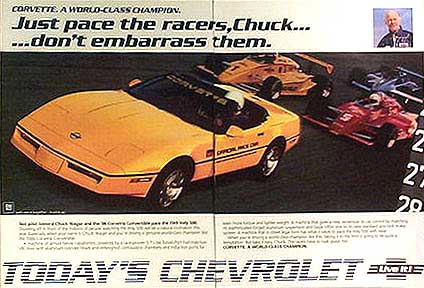 1986 was a banner year for Corvette fans with the return of the roadster. The ‘70s was an awful time for performance cars and “fun” cars in general. Between new strict emission controls, sky rocketing gasoline prices (all the way up to 50¢ a gallon! in ‘73), reduced performance, and increased safety concerns, it was not a good time. Convertibles also went down the drain too. Beginning in the Fall of ‘75 with the ‘76 model, there were no more Corvette roadsters. After 22 years, the Corvette Roadster was dead.

So in ‘85 when it was announced that the roadster would be returning, Corvette fans couldn’t be happier. But unlike the olden days when a convertible Corvette cost LESS than a coupe (the ‘75 convertible cost $6,550 and the coupe cost $260 more than the roadster!), the ‘86 Corvette convertible cost an additional $5,005! Unlike the C2 and C3 chassis and body structure, the C4 was not originally designed to be a topless car. Coupe to convertible conversions usually have the characteristic cowl shake and sometimes ride more like wiggle wagons where the driver can actually see the dash shake on bumpy twisty roads. The solution for the C4 was to add a large X-brace to stiffen the chassis. 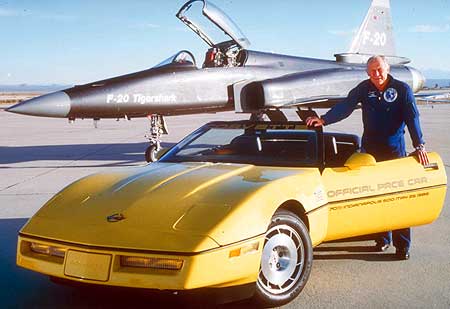 The second piece of big news for ‘86 was that a Corvette would pace the Indy 500 for the second time. Retired General Chuck Yeager was enjoying celebrity status as a result of the book and movie, “The Right Stuff.” But Chevrolet was still smarting from the heavy criticism over the ‘78 Corvette Pace Car debacle and seemed to go in the opposite direction. Rather than producing a set number of pace car relicas, ALL ‘86 Corvette convertibles were designated as a “Pace Car Replica” and came with dealer or customer applied decals for the doors. Many said, “Why bother.”

By the end of the year, 7,315 of the 35,109 Corvettes were convertibles (20%), all considers “pace cars” regardless of the color of the car. The actual Indy 500 Pace Cars were all yellow and 732 yellow convertibles were sold for the year. No special embroidery, wheel centers, stripes, spoilers… just a set of decals. Consequently, of the six Corvette pace car replicas offered from ‘78 to ‘08, the ‘86 model is the least valuable. Most of the ‘86 Corvette convertible “Pace Cars” never had their decals applied. END_OF_DOCUMENT_TOKEN_TO_BE_REPLACED