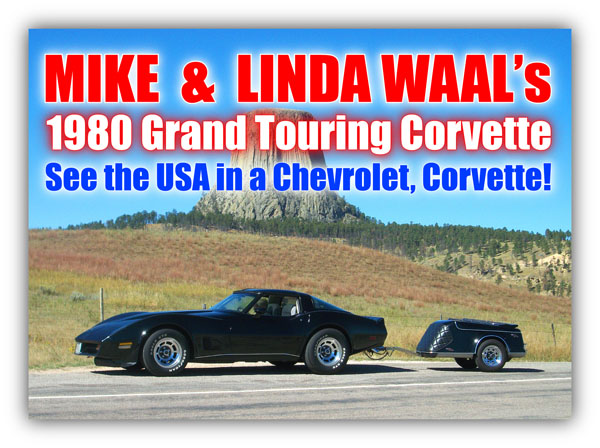 See the USA in a Chevrolet, CORVETTE!

Dateline: 4-5-22 (this story was first published in the April 2018 issue of Vette Vues Magazine) – The term “GT” is arguably one of the most misused automotive designations. The term dates back to the 1930s in Europe and is an abbreviation for the words “grand touring,” or as they say in Italian, “Grand Turismo.” In the classic sense, a GT car was a road-going, lightweight, semi-luxurious coupe, built on a high-performance chassis. In the 1960s, American carmakers started to apply the GT term to many of their new pony and intermediate-size cars. END_OF_DOCUMENT_TOKEN_TO_BE_REPLACED

Be sure to CAST YOUR VOTE at the bottom of this post. Let us know what you think
Plus, there’s a slide show of past Anniversary Edition Corvettes! 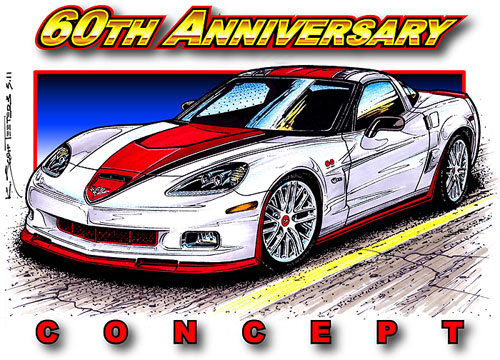 Now that it’s “official” that the C7 Corvette will be a 2014 model, that means that the final C6 will be a 2013, which opens up the very real possibility of at least one definite special edition Corvette and possibly another. (What might that be? Stay tuned!)

Beginning with the ‘07 Ron Fellows Z06 Special, Chevrolet has been on a roll, offering six Special Edition Corvettes between 2007 and 2011. “Anniversary” Corvettes started in 1978 with the Silver Anniversary paint option to commemorate the Corvette’s 25th year. To date we have seen four unique anniversary specials:

It’s highly unlikely that Chevrolet is going to let two coinciding Corvette milestones go without some kind of celebration. So what would a 60th Anniversary Corvette look like and how would it be equipped? Obviously, we won’t know until Chevrolet wants us to know. But in the mean time, I thought it would be fun to do some speculation. END_OF_DOCUMENT_TOKEN_TO_BE_REPLACED 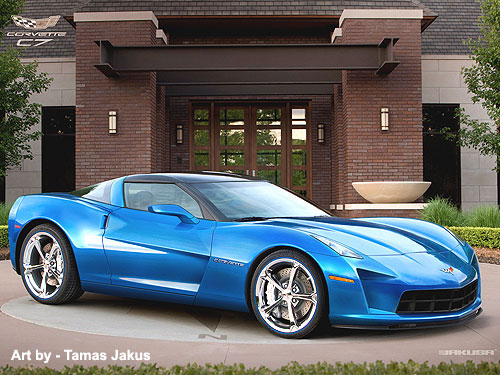 I have been following the Corvette hobby since the mid-’60s. Nothing stokes the faithful loyal Corvette fans like a really hot-looking Corvette show car. The first question is obvious, “Is this the next Vette?” C7 Corvette rumors started in mid-’07 with chatter about a possible mid-engine as the design layout of choice for the next generation Corvette. I’m not sure of where that came from, as mid-engine cars are notoriously inefficient when it comes to use of space and workability.

In the olden days, (‘60s, ‘70s,’80s, and ‘90s) fans had to wait for either artwork or one of Jim Dunne’s famous, long-lens, blurry images of a Corvette prototype being thrashed about at one of GMs test centers. Many of those cars were wearing grotesque panels to disguise the car’s new shape. Those kinds of images inevitably lead to reader comments, such as, “YOU’VE GOT TO BE KIDDING!” OR “What are they THINKING?!” END_OF_DOCUMENT_TOKEN_TO_BE_REPLACED

If a “Split-Window” option was available on the C7 Corvette, would you order your C7 with one?

This is the photo from the Car and Driver story.

I Photoshopped the split-window out of the rear window on this photo.

Last week I talked about the Car and Driver C7 update from their April 2011 issue. Among all the rehashed jib-jab, there was one tantalizing paragraph. The seventh paragraph says…

“More startling, it seems certain that the coupe’s going-away view will feature a split rear window – ‘a la the one-year Sting Ray coupe of 1963 – though in this case it will be an optional feature. Chevrolet first signaled its interest in reviving the split-window by outfitting the Stingray concept vehicle with one. Yes, that’s the one that appeared in the second Transformers movie.”

In my initial hunt for some technical/technical red meat in the story, I kind of skipped by the above detail. The rearview image from the Car and Driver story (quite possibly a styling study) shows a split-window, although due to the low angle of the image, it’s easy to not notice. END_OF_DOCUMENT_TOKEN_TO_BE_REPLACED 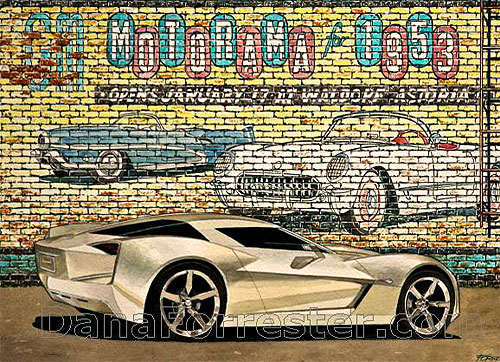 Over the last few months there’s been a real absence of official news from GM about the next generation C7 Corvette. While GM’s fortunes have turned around recently with their successful IPO stock offering and very good sales of the core line cars, Corvette sales continue to slip. It’s not for a lack of selection, as the ‘11 Corvette line offers buyers a true Corvette boutique of choices. Could it be that buyers are content with their existing Corvettes and are simply waiting for the C7? Or, is it just “the economy, stupid”?

Of course it’s anyone’s guess, but it provides excellent fodder for endless speculation. Back in November 2011 I posted a collection of C7 Corvette concept renderings that clearly shows that a lot of talented designers are putting pen to paper and working their computer graphics magic. With so many interesting designs out in cyberspace, it’s worth remembering that the Transformers / Centennial Corvette concept show car is the ONLY official visual from GM. And lately, they’ve been VERY quiet.

However, I did find the following interesting comment at DigitalCorvettes.com that addresses the Transformers design, END_OF_DOCUMENT_TOKEN_TO_BE_REPLACED