A look back 60 years ago to how the first Corvette came to be.

I call the Corvette the “The American Automotive Horatio Alger Story.” It’s the ultimate automotive rags-to-riches story. You could also call it an automotive Cinderella story. While the C6 has taken more flack than it deserves, it’s good to look back to the very beginning to get a really clear picture of how far the Corvette has come in 60 years.

Since we’re rolling into the C6’s final year and looking forward to the new 7th generation Vette, the next several installments of my VETTE Magazine monthly column looks back at the “first” of each generation Corvette. So, let’s go back to the beginning. – Scott 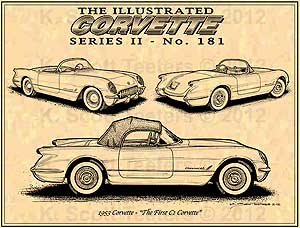 In September 1951, GM’s chief of design, Harley Earl took his Le Sabre dream car to Watkins Glen for a little GM-style show’n tell.  Earl was impressed with the “sports cars” he saw there and went back to work with a new car concept for General Motors – an American sports car.

Post WW II saw the birth of plastics and glass-reinforced plastic, or “fiberglass” and Earl saw a new way to build prototypes and production cars. In February ‘52, Life Magazine presented the new space age material in a story titled “Plastic Bodies For Autos.” By March, GM was reviewing the Alembic I, a fiberglass bodied Jeep. Impressed with the new material, Earl decided to start moving on his sports car idea. Engineer Robert McLean designed a chassis layout and by April a full-size plaster model was shown to GM’s management. The following month, Ed Cole was promoted to Chief of Engineering for Chevrolet and was onboard with Earl’s project. Earl pitched his concept to GM’s president, Charles Wilson and Chevrolet general manager, Thomas Keating in June and got the approval to build a functional prototype for the GM Motorama in January 1953. The car’s working name was… “the Opel Sports Car.” END_OF_DOCUMENT_TOKEN_TO_BE_REPLACED 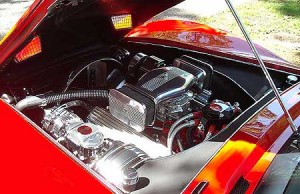 I would venture to say that the most common question Corvette owners get is, “What year is your Vette?” Everyone wants to know how new or how old your Corvette happens to be. The second or third most common question owners hear is “What’s under the hood?” Now, we’re getting down to business. Were it not for stout, high-performance engines, Corvettes would have been just another Detroit pretty face. Two aspects of Corvettes that simply CAN NOT be disconnected on are “looks” and “power.”

In October 2010 when I attended the Vettes at Glasstown Corvette Show I took LOTS of pictures of Vette engines. Since most everyone had their hoods up and were saying in Corvette body language, “Hey! Look at my engine!” why not take pictures? When looked at over the span of nearly 60 years, you can clearly see visual phases in under-the-hood appearance.

From ‘53 to ‘66 engines were amazingly simple and 95% of everything was easily accessible. As emissions controls crept in, things got a little busy and by the end of the C3 generation, all kinds of things seemed to be growing under the hood. The first of the C4 engines had a big, honk’n cover over the cross-fire injectors and by ‘85 Vettes were again full-blown, fuel injected machines. The L98 and the LT1 and LT5 engines all had unique-looking fuelie designs. The LT-5 engine that powered the C4 ZR1 was as visually stunning as the old 427/435 big-blocks. 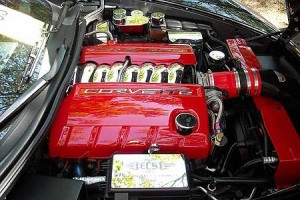 With the arrival of the new LS-series in ‘97, the all-aluminum engines started wearing engine covers. Open the hood of a C5 or C6 Corvette and the biggest and first thing you see is the engine cover. The covers aren’t really needed, but they sure look cool and are now END_OF_DOCUMENT_TOKEN_TO_BE_REPLACED

What an OUTRAGEOUS proposal! Take a Chevy sedan chassis and drivetrain, soup up the in-line-six “Stovebolt” engine, and dress it with a sexy lightweight body made of an exotic new material – fiberglass. That’s was GM chief of design, Harley Earl’s idea of an American sports car.

The Stovebolt-Six engine was goosed by adding three Carter one-barrel carbs, a more aggressive solid-lifter cam, increased compression to 8:1, dual valve springs, stronger exhaust valves, and a high-efficiency water pump. The 115-HP Stovebolt six was reborn as the Blue Flame Six and packed a mighty 150-HP @ 4200 rpm and 224 LB/FT or torque. (calm down, calm down) The transmission was the tried-and-true Chevrolet Powerglide automatic with the shifter on the floor.

While the fiberglass was exotic for 1953, there was a more practical reason for using the plastic material – COST. Even though finishing the body was more labor intensive, it was no where near the cost of making the huge metal stamps for steel body parts. Chevrolet engineers determined that if the car failed, they would have a minimal financial risk using fiberglass. END_OF_DOCUMENT_TOKEN_TO_BE_REPLACED

From the Blue-Flame Six to the Mighty LS9,

a Salute to Corvette Engines

Check out the SLIDE SHOW at the bottom of this post!!!

If you are new to the Corvette hobby, it’s hard to realize that 57 years ago the car began as a 150-HP beauty queen, made from a new and exotic material called “fiberglass,” available in any color, so long as it was white. As soon as Duntov could get his “magic hands” on the first small-block Chevy, the party began. Dual quads showed up right away and before we knew it, in ‘57 we had a fuel-injected Corvette. Take that! European exotics! F.I. is common today, but back then, wow, that was American-style autoexotic.