The Corvette legend has many aspects. Most obvious is the car’s outstanding good looks. Generally it is good to look at the various styles of Corvettes from the perspective of their day – what did regular cars of the day look like. Only then is it obvious how far advanced Corvette styling has always been.

Equally important within the Corvette mystique is what’s under the hood. Many Corvette engines have become automotive heroes and legends. I am launching a new Corvette art prints series called, “Corvette Engine Blueprint Series.” END_OF_DOCUMENT_TOKEN_TO_BE_REPLACED 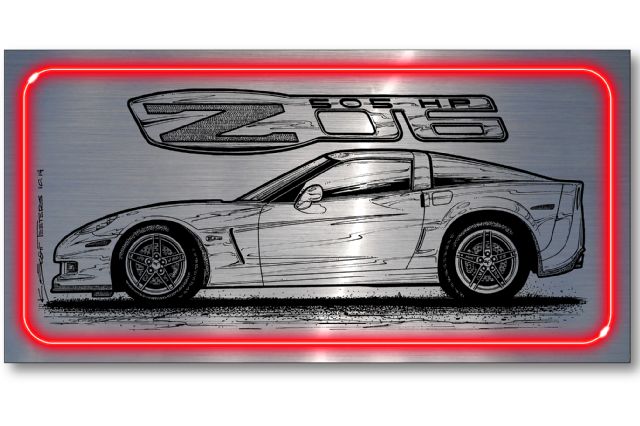 Words and Art by Scott Teeters as written for Vette Magazine and republished from www.SuperChevy.com

When the C6 debuted in late 2004, it was about 30 seconds later when fans asked, “So, where’s the Z06?” When the C6 Z06 arrived a year later, it was worth the wait and proved to be a wolf in wolf’s clothing. Where the C5 was muscular, the C6 was sharp and crisp, like a freshly pressed business suit. The C6 Z06 was a pressed C6 with extra starch, steroids, protein powder, and a heavy workout at the ALMS racing gym. This widebody configuration was used on the Z06 through the remainder of the C6 run, plus served as the platform for the 205-mph capable ’09 -’13 ZR1 and the ’10-’13 Grand Sport.

END_OF_DOCUMENT_TOKEN_TO_BE_REPLACED

Elvis Presley’s death on August 16, 1977 touched America like no other. What was initially a heartbreak for the man that took rock’n roll mainstream, has turned into an annual celebration of one man’s music that continues to touch the hearts of millions. Memphis is currently gearing up for Elvis Week, an organic event that began as a solemn remembrance that is now a happy time for visitors from around the world. it is truly a unique American experience.

In the world of high performance cars, the Corvette is very much like Elvis Presley – born of humble beginnings, big, flamboyant, loud, with a strong personality, an American original, often imitated, and never duplicated. The expression, “The King is Back” was PERFECT for the C6 Z06 Corvette. While the C5 Z06 is a fantastic car, the C6 Z06 took the monicker to a whole new and higher level of performance. With an extra 100-horsepower from the LS7 engine and a refined suspension, the C6 Z06 caught even seasoned high performance Corvette owners short.  One man I know that has had many Corvettes over the years told me that Chevrolet should require high performance driving school training with this car. Skeets and others said the same thing and Chevrolet listened.

The commercial begs the question, “Was Elvis a Corvette fan and did he own any Vettes?”  The short answer is, no and yes – kind of. END_OF_DOCUMENT_TOKEN_TO_BE_REPLACED