Every debutante has her day, that special day when she’s the bell of the ball. Corvette styling chief and lead designer of the C6 Corvette and the Corvette Stingray Concept car, Tom Peters was a proud papa on February 11,2009 when GM’s Ed Welburn debuted the Corvette Stingray Concept car at the Chicago Auto Show. Before we get into the rest of the event, let me get this out of the way in the beginning. In Spring ‘11 I had the opportunity to talk at length with Tom Peters for my Illustrated Corvette Series No. 170 2-page color special edition covering the latest and arguably the swoopiest Corvette concept car to ever wear the Corvette moniker. Tom was emphatic, “This is NOT the C7 Corvette.”

I already knew that before we spoke and perhaps it was my clarification before we talked that I was not trying to fish for details about the C7 design we all know Tom and his team have been working very hard upon. Our conversation was strictly focused on the actual Corvette Stingray Concept car. While there are tons of photos with copious amounts of regurgitated generic speculation about what the latest concept Vette represents, there were actually very few details about the actual car. You can read the compete article as it appeared in the August 2011 issue of VETTE Magazine, HERE.

But for this post, lets get back to the debut video. Corvettes have never been far from Hollywood. Millions of Americans weekly enjoyed the adventures of Todd Styles (Martin Milner) and Buzz Murdock (George Maharis) in the early ‘60s TV show, “Route 66.” Corvettes have had bit parts in everything from the Elvis Presley movie, “Clambake,” the film, “Corvette Summer,” the 80s TV show “Stingray,” and now the latest in the Transformers franchise, as the car/transforming robot machine, “Sideswipe” in the Michael Bay film, “Transformers: Dark of the Moon.” Unlike the Presley film, “Clambake” which used a red version of the ‘59 Stingray Racer, END_OF_DOCUMENT_TOKEN_TO_BE_REPLACED 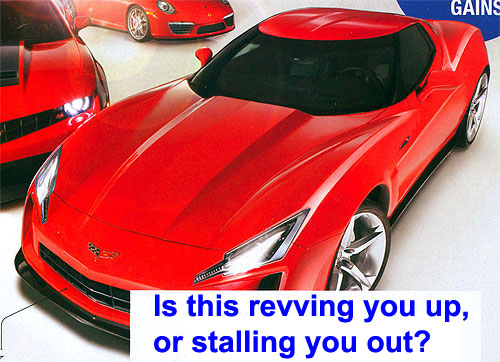 (Editor’s note: Before I get started, I want to point out that I personally have NO inside information or connections. What follows is educated speculation on my part.)

We invite you to leave your thoughts and opinionson this latest iteration at the bottom of this post.

The April 2011 issue of Car and Driver magazine arrived in my mailbox yesterday and my immediate response was “WOW!” The cover story is, “25 Cars Worth Waiting For!” and splashed in the front of the grouping of three red hot cars is, what is most likely a computer generated images of the 2013 Corvette. Just behind the Corvette image is the 2012 ZL1 Camaro with a tiny image of a 2012 911 Porsche. It’s a good-looking cover, with the Corvette in the lead. END_OF_DOCUMENT_TOKEN_TO_BE_REPLACED

Ever since the Transformers movie car arrived, C7 speculation has been the hottest topic in the Corvette community. And as if speculation over the C7 wasn’t enough, there’s also speculation about the C8 Corvette! Of course, all of this may well be happy talk because if the C6 doesn’t pull out of its nose dive, we may be looking at those familiar lines for a LONG time. I also want to point out that while anything can be improved, the C6 didn’t suddenly become an outdated, stogy, slug. There’s SO MUCH red meat built into the car. Look at the Lingenfelter ZR1 with some minor intake and slight gearing changes that ran 9.8-seconds in the quarter-mile in December ‘09!!!

As far as hardware is concerned, it’s all speculation at this point. The Corvette designers are 100% mum about ANY details. About styling, for me, the basic shape of the Transformers / Centennial MINUS the cartoonish front and rear gills, works. I’ve been following Corvettes since the mid-’60s and every time there’s a new design, it takes about a year to get used to the new shape. But in retrospect, I can NOT look back at any new generation Corvette and say, “bad job.” I’m very confident that the designers and stylists that are now working on the C7 will get it right and successfully capture the eseance of that which is “Corvette”. END_OF_DOCUMENT_TOKEN_TO_BE_REPLACED

Are These C7 Corvette Styling Concepts Making You Warm?

We want your opinion, and here is mine.

(Editor’s Note: One of the cool things about running a blog, such as this one, is that we can track the popularity of the topics we post. So far, this post has garnered the most number of hits, telling us that there’s LOTS of interest in what’s in store for the C7 Corvette. After writing this post I was inspired to create a set of drawings that reflect my critique of the Transformers/Centennial concept car shown in this post.  The illustrations appeared in my VETTE Magazine column in the October 2010 issue as a 2-page center spread. After the publication of the illustrations, I posted the article titled, “K. Scott Teeters’ C7 Split-Window Coupe Concept Corvette.” So, after reading this post, we invite you to check out the illustrations that reflect the comments below. I included photos of the real concept car and scans of the art so that you can clearly see how I came to my design. So, enjoy the post below, or CLICK HERE to jump ahead to the post with the illustrations. KST)

I want to address the issue as a Corvette enthusiast and an artist with a car designer’s heart, of some of the C7 Corvette concept cars we’ve seen so far. I’m going to give my critique of just the shapes. I’ll tell you what I like and why, what I don’t like, and why. I think the recent magazine articles for these cars are just a lot of PR speculation – some red meat for the fans. But I’m most interested in what YOU think of the styling of these cars. So let’s read what I think and then you send me your opinion at the end in the comments section, Okay?

When I told my wife what the sub-title of this article would be, she said, “Oh, don’t use that sexual expression.” I explained that sports cars are about sex. Driving them is a sensual experience – you don’t just “ride” in a sports car, you “DRIVE” the sports car. The hottest sports cars will always catch your breath. Even the old classics. That’s one of the cool things about owning a Corvette. Even people that don’t know what it is, (other than, just a “car”) will say, “WOW! What kind of car is that?” END_OF_DOCUMENT_TOKEN_TO_BE_REPLACED