Subtitle: Omega Tool Corp Does Damage Control, ON US!

I was about to tell you all about a really awesome piece of Corvette racing history that’s going on the auction block, when I received an interesting email from the law firm of Schafer and Warner, PLL demanding that we remove the wrongfully and illegally posted image of a screen shot from a bootlegged video that was posted online that sure looks like the nose of the C7 Corvette. I discovered the images from my Google Alerts, which is setup to inform me of Corvette related stories in the news. The only image in the post showed the front bumper cover of what was speculated to be the nose of the C7 Corvette. The image was linked back to the source of the story, as per my Google Alert, and we included a text link to the source.

In followup emails from Google Alerts on Monday, Tuesday, and early Wednesday, it was obvious that the Corvette hungry community was all over this story like flies on stink. So I’m sure the legal eagles have been working hard to scour the net, racking up copious hours of billing time.

Well, I got on it right away, YES, SIR! Least we be the cause of any damages the the Omega Tool Corp might suffer as a result of their own problem. No, the only “suffering” they’ll incur is the butt chewing they probably already received from their big boss, plus the bill they’ll be getting from their attorneys for fix their screw up. It’s funny, because when I first read the story, I said out loud, “D’OGH! Someone’s in a HEAP OF TROUBLE!” The picture that came to my mind’s eye was that of sheriff Buford T. Justice, the cartoony character wonderfully played by Jackie Gleason in the “Smokey and the Bandit” movies. (next I’ll get a letter about the Gleason image) If you were able to see the illegal images in question, you might have wondered, “Is this REALLY the nose of the C7?” Now you know for sure, IT IS THE C7! Otherwise there wouldn’t be this END_OF_DOCUMENT_TOKEN_TO_BE_REPLACED

Car and Driver Splashes the C7 Corvette – A PERFECT swan dive or a belly flop?

Cast your vote at the end of this post. 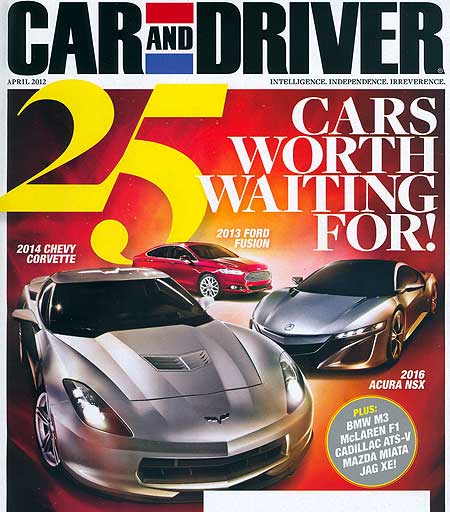 Don’t you just love a nice surprise in your mailbox? You know, a nice fat IRS tax refund, a Publishers Clearance Warehouse winner notification, or a letter from an old flame. (okay, maybe not that last one) The April 2012 issue of Car and Driver arrived in my mailbox today and I was greeted with what appears to be the real car that the November 2011 Jalopnik illustrations were based upon. It’s SO hard to tell computer rendered cars these days. “Usually” computer images are a little too flashy and that’s the telltale sign. A year, or less, from now, we’ll know for sure how spot on Jalopnik and Car and Driver are.

But for now, it’s deal with what’s in front of us. Sometimes, cars look better in person. But the C7 is looking more like a C6.75. I know that Corvettes tend to be evolutionary in their design, but honestly, there’d better be some stunning things going on under all the pretty fiberglass and carbon fiber.

The front view of the car is interesting, but two design elements bother me. The front grille opening looks awfully close to that of the 1993 – 2002 Camaro with its Billy Bass mouth. Going by the Jalopnik renderings, the hood vents and vents on the tops of the rear fenders indicate that this is the 2015 ZR1 configuration. But the vents on the hood look like those on the new ZL1 Camaro. Since when does the Corvette FOLLOW the Camaro? (when Camaros outsell Corvettes 6-to-1?) I suppose we’ll get used to it. But we’re not supposed to “get used to it,” we’re supposed to LUST for it!

And now to the back end. (sigh) PLEASE!!! Don’t let this be the real back end of the C7 Corvette, PLEASE. If so, we’ll never hear the end of the “Cormaro” of the “Camvette.” END_OF_DOCUMENT_TOKEN_TO_BE_REPLACED

Dateline: 8.13.11
Take a trip in the CorvetteReport Time Machine back to 1973 for a look-see at what could have been the first mid-engine production Corvette!

With all the chitter-chatter in the C7 Corvette rumor mill about a possible mid-engine Corvette, we thought it would be fun to take a trip back to 1973 for a look at what many thought would be the replacement for the C3 Mako Shark-styled Corvette. Corvette chief of engineering, Zora Arkus-Duntov had been pitching the mid-engine layout since the 1960 CERV I car. Not only was the AeroVette a mid-engine layout, it was to be powered by a 420-horsepower, 4-rotor Wankel rotor-motor engine. GM had licensing rights to develop the radical rotary engine that seemed to have a lot of potential.

In ‘73 there were two, rotary engine-powered Corvette prototypes. The XP-892 used a 2-rotor engine and had a body designed by Pininfarina. While it was a nice-looking car, it really didn’t shout, “CORVETTE!” The 4-rotor car was built on the chassis platform of a previous 1970 experimental Corvette that was simply known as the XP-882. The 4-rotor car definitely screamed, “CORVETTE!” END_OF_DOCUMENT_TOKEN_TO_BE_REPLACED