Mitchell was a master at proportions. By itself, the Mako Shark looked BIG. But next to a production ‘68 Corvette, it looks like a 7/8s-size car.

It was probably a hot July day in Detroit when William L. “Bill” Mitchell quietly retired from General Motors after 42 years of service! Volumes could be written about this man. Mitchell looms large in the Corvette world because he was one of four key players that were responsible for setting the tone and design of the Corvette. Harley Earl came up with the concept of a mass-produced American sports car built in Detroit. Ed Cole was the inside engineer man that made it happen. Zora Arkus-Duntov put hair on the Corvette’s chest and made it the car a bare-knuckles brawler. And Bill Mitchell designed and guided the ‘63 – ‘67 Sting Ray and the Mako Shark-II-styled C3 Corvette. The Corvette would not have its signature style were it not for Bill Mitchell. 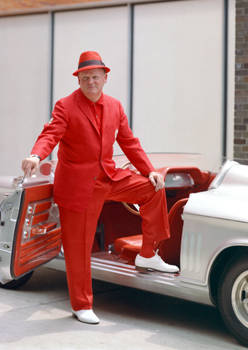 Bill was known as a “snappy dresser” that loved expensive italian silk suits. “Red” was also his favorite color.

Bill Mitchell, son of a Buick car dealer, started his professional career as an illustrator that liked to draw cars. While an illustrator at Collier Advertising, someone suggested that he show his car renderings to then VP of GM’s Art and Color Department, Harley Earl. Harley liked what he saw and hired Mitchell on December 15, 1935. Mitchell became Earl’s protégé and was eventually END_OF_DOCUMENT_TOKEN_TO_BE_REPLACED