Dateline: 9-25-15 – Car auctions are a ton of fun! I mean it doesn’t take long and the sing-song of the auctioneer starts to have a happy sound. But not as happy as seeing someone getting an awesome deal on a stunning Corvette.

In 1991 the ZR-1 was the “Corvette to die for!” Everything was SO exotic, it’s too bad Chevrolet played it outrageously safe with the body styling that looks almost exactly like a regular Corvette. On well, ZR-1s are still beauties and the only way it could get better was to have Callaway Engineering do their thing on top of what was already Corvette’s flagship model. END_OF_DOCUMENT_TOKEN_TO_BE_REPLACED

Dateline: 10.1.11
With 13 Model Years and Eight Unique Special Versions, Vote For Your Favorite! 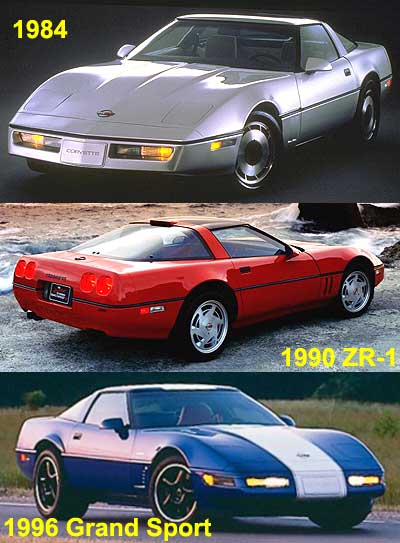 Cast your vote at the bottom of this post

When the new 1984 Corvette was shown to the automotive press in the Summer of ‘83, there was a wave of euphoria. “FINALLY!!! A New Corvette!” As there should have been. After all, the Shark had been with us since 1968 and the steel parameter frame and suspension since 1963. The chassis was designed somewhere around 1960! So you could say the car was a little over due for an update.

C4 Corvettes are at rock bottom prices these days and there were so many built that if you cut one up and make it into a hot rod, no one will howl at you. That is, unless you cut up a Grand Sport. I’ve read comments from some fellows stating that for them, the appeal of a C4 is that it still has that “rough muscle car” feel to it. As a generation, the C4 had a lot to offer and today, they make excellent entry level Corvettes. I’ve seen early C4s with a little END_OF_DOCUMENT_TOKEN_TO_BE_REPLACED

And there were several interesting special edition C4s as well. There was the ‘86 Pace Car Special, the ‘88 35th Anniversary Edition, the ‘90 to ‘95 ZR-1 option (the single most expensive optional package in Corvette history!), the ‘93 40th Anniversary Edition, the ‘95 Pace Car, the ‘96 Collector Edition, and the ‘96 Grand Sport. That’s tremendous progress and consistent special editions that kept the C4s fresh and interesting.

Corvettes so heavily dominated the SCCA Showroom Stock racing series they were kicked out! So, the Corvette Challenge “Corvettes only” race series was created. Morrison Motorsports blasted a 50-year speed record with a mildly-modified ZR-1 and Callaway build their 898-horsepower, 254.76-MPH Sledgehammer. Tuners such as Callaway, Greenwood, and Guldstrand offered END_OF_DOCUMENT_TOKEN_TO_BE_REPLACED