Chuck Jordan – the last of the old guard GM designers. 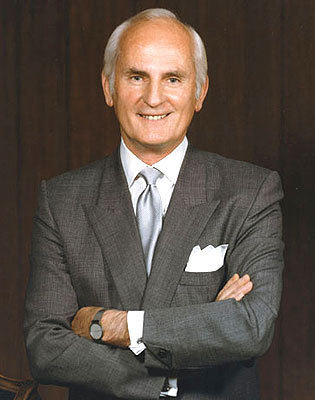 When car designer Chuck Jordan passed on December 9, 2010, it was the end of an era in automotive design. Jordan started working for GM in 1949 as a junior engineer and retired in 1992. During that time, he worked with all of the greats of GM design; Harley Earl, Bill Mitchell, Ed Cole, Zora Arkus-Duntov, Larry Shinoda, and more.

Jordan’s nickname was “the Chrome Cobra.” He was steeped in a time of very strong personalities. Harley Earl and Bill Mitchell had strong personalities  with flash-like tempers – quick to anger, quick to let it go. When Mitchell retired in ‘77, his replacement, Irv Rybicki, was specifically chosen because upper management said, “No more strong opinionated design chiefs!” They were glad to see old Bill go. Irv was an excellent designer, but to Jordan, Rybicki seemed to play it safe too much. The automotive press noticed too and began to wonder what happened to GM’s sense of style.

But Jordan got his shot in ‘86 when Rybicki retired and was promoted to vice president of design, serving from ‘86 to ‘92. Below is a brief slide show of some of the cars Jordan styled, designed, and managed through the development process. Design styling is one thing and designing for mass production is another. Some designs translate into production better than others. What’s obvious is that over his 40-plus year career as a car designer, he consistently followed the advanced trends of the day. Chuck loved design so much that after he retired, he taught design at ??? He could have stayed home and enjoyed his many Ferrari sports cars. But Jordan loved the high school art design in Southern California. END_OF_DOCUMENT_TOKEN_TO_BE_REPLACED