The Illustrated Corvette Series “First” continues with a look back at the FIRST production Sting Ray.

A few years ago, someone created a series of Chevrolet billboards using classic, iconic images of some of the most popular Chevrolet cars. Naturally, there were several layouts featuring Corvettes. While this is a totally biased opinion, I think the above “The Original American Idol” is the best. Four words sum it up perfectly and the back end of the one and only, split-window coupe says a thousand words.

Our friend and VETTE Magazine founding editor, Marty Schorr, recently posted a review of the new 911 Porsche Carrera S at his CarGuyChronicles.com blog site. Writer, Howard Walker expounds on the fact that while the latest version of the classic 911 shares no hardware what-so-ever with the original and first ‘63 911, the spirit of the original 911 is still in tact. It’s an amazing combination of the rear-engine layout and the fact that the car still “looks” like a 911, only bigger and much better. I have often wondered what today’s Corvette would look like had Bill Mitchell never designed the game changing Mako Shark II. As I have written here in stories about Mitchell’s Mako Corvettes, the Mako Shark II was so astonishing, it simply HAD TO BE the next Corvette. End of conversation! And, we’ve moved on from there.

So, buckle up and lets take a blast back to 1963 for a look-see at the first production Sting Ray! – Scott 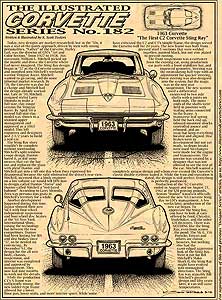 I call the Corvette the “The American Automotive Horatio Alger Story.” It’s the ultimate automotive rags-to-riches story. You could also call it an automotive Cinderella story. While the C6 has taken more flack than it deserves, it’s good to look back to the very beginning to get a really clear picture of how far the Corvette has come in 60 years. Today, new designs are market researched, but in the ‘50s, it was a seat-of-the-pants approach, driven by men with strong personalities. “Father” of the Corvette, Harley Earl, was the director of GM’s “Art and Color Section.” from 1927 to 1958.  His successor, William L. Mitchell picked up the mantle and drove the Corvette where Earl never imagined.

The Sting Ray design began in ‘57 as the Q-Corvette concept and morphed into Mitchell’s weekend warrior Stingray Racer. Mitchell wanted to go racing, and do some informal market research. By ‘59, the Corvette was due for a change and Mitchell had the design already worked out. Late in ‘59, Mitchell assigned stylist Larry Shinoda to make a full-size, clay coupe version the Stingray Racer. By April ‘60 END_OF_DOCUMENT_TOKEN_TO_BE_REPLACED