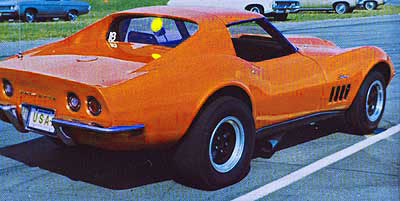 Forty years ago it took a lot to get a car to run 10s in the quarter-mile. You needed a BIG engine, open tuned headers, a giant gas sucking Holley carb, slicks, ear plugs, and a lot of NERVE! Today, it’s no biggie for a performance car to run low 11’s. Lingenfelter Engineering has been able to get a mildly modified ZR1 to run low-to-mid 9s with ALL of the stock creature comforts. All you have to do is HOLD ON!

No, back in the old muscle car dayz, low 11s and high 10s in the quarter-mile was Super Stocker and Modified Production territory. Low 10s and 9s was the realm of Pro Stockers with the likes of Grumpy Jenkins, Sox & Martin, Dick Landy, Dyno Don Nicholson and a few dozen others. In their day, they were the rock stars of drag racing. 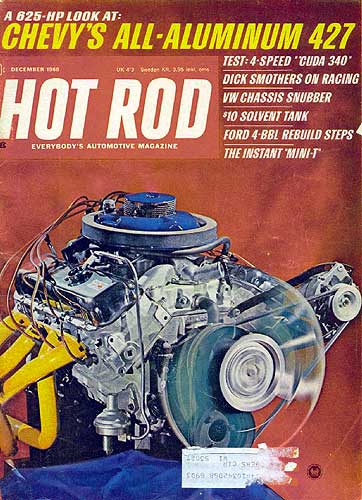 When the December 1968 issue of Hot Rod Magazine  hit the news stands, with a full-cover shot of the all-aluminum 427 ZL-1 engine, heads spun like Linda Blair in The Exorcist! The headline at the top of the cover read, “A 625-HP LOOK AT: CHEVY’S ALL-ALUMINUM 427.” While today we might say, “There’s no substitute for a supercharger,” back then, the expression was “There’s no substitute for cubic-inches. If there’s enough meat left in the block, just bore it out and insert bigger pistons. Chevy’s 427 had been in production since ‘66, so when the ‘70 models came around, what was Chevrolet to do? Bore, Baby, Bore!

The cast iron 454 was a no-brainer, but what about the all-aluminum ZL-1? Just to see what kind of response they’d get from the press (as if they weren’t sure) Chevrolet engineers Tom Langdon and Gib Hufstader built a special 454 version of the ZL-1, coupled it with a Turbo 400 3-speed tranny, a high-stall torque converter, tall gears, and 9-inch slicks. Yes, it was a quasi-Super Stocker and they let the automotive press make passes on a 1/4-mile stretch at the test track!