I’d say it’s a pretty good guess that most of us that love Corvettes and cars in general, spent hours and hours building 1:25th scale model cars. When you are ten years old, it’s a great way to learn about the various parts of an engine, drive train, suspension, etc. It was as if AMT, Revell, and Monogram were “teaching” us about real cars.

Regardless, it was big fun for me, and because I’m patient and have a steady hand, my model builds were pretty good.

But I Was Never This Good!

I’d like to introduce you to two “gasoline in the veins” kinds of guys. George Haddad from Fort Lauderdale, Florida has been a hot rod builder for over 45 years. Doug Whyte learned his modeling craft through his work for The Danberry Mint. The die-cast, articulated cars, and trucks that Danberry Mint is well known for their extraordinary articulation and detail.

George Haddad has carved a unique corner for himself, he’s the Master of Re-Creations. George’s shop, Fabulous Restorations has been building and painting hot rods, street rods, customs, and race cars for over 45 years. 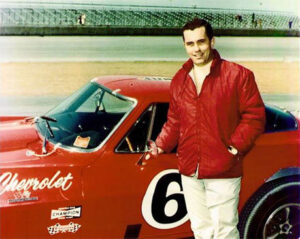 The Penske 1966 L88, the Sunoco Blue with “Sunoco” livery, is currently owned by Kevin Mackay, in Valley Stream New York. But, the Sunoco Blue livery wasn’t the car’s first livery. When the Penske team first raced the car with just “Sunoco” on the car’s front fender at the 1966 24 Hours of Daytona, the car was factory Rally Red, with obvious racing modifications. This iteration won its class at the 1966 24 Hours of Daytona. 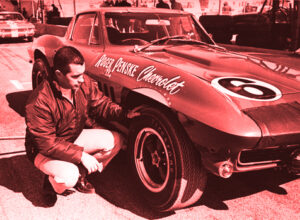 Sunoco was happy with Roger Penske’s success they granted another “one race” sponsorship, but with one change. Sunoco wanted the Rally Red Corvette to be painted “Sunoco Blue”. Penske said, “No problem!”

The car was repainted Sunoco Blue, race prepped, and won its class at the 12 Hours of Sebring! The Penske 427 Corvette proved that a big-block Corvette could win races! END_OF_DOCUMENT_TOKEN_TO_BE_REPLACED