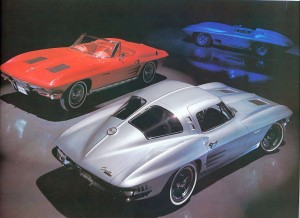 Over the weekend I was looking a photos online of ‘63 Split-Window Coupe Corvettes. I especially like the GM studio shots. Not only are they uniquely lit and posed, sometimes little clues are there if you look closely. Any way, they’re a lot of fun to look at.

The above picture caught my eye because the father of the production ‘63 Sting Ray, Bill Mitchell’s Stingray Racer, is in the background lit with blue light on its silver paint.

The red roadster and coupe have no fender vents, but substantial scoops that go into the doors with two horizontal spears. The roadster has side rocker panels that almost look like the side-pipe covers that would arrive in ‘65. And it appears that the gas filler cap is located on the driver’s side rear fender.

The silver split-window coupe has little shark gill decorations going on that awkwardly cut behind the bumpers. This looks like one of Bill Mitchell’s frills he liked adding on the show cars. “Elements of Discovery” was the idea. But with an overall outstanding design shape, do-dads aren’t needed. END_OF_DOCUMENT_TOKEN_TO_BE_REPLACED