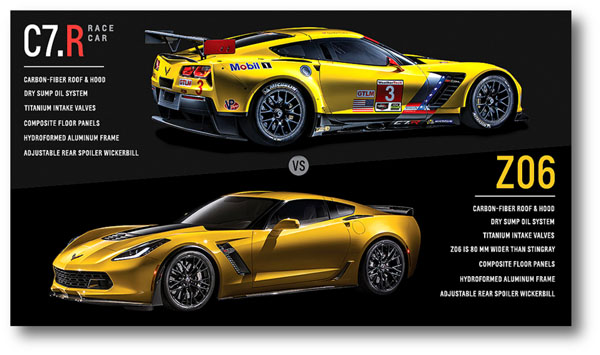 Dateline: 5.2.22 Graphics & Illustrations by K. Scott Teeters, Photos GM Archives, this story was first published in the April 2017 issue of Vette Vues Magazine – Update – The C8 Z06 has been all over the Corvette community, as it should be. Clearly, the car is a vast improvement over the C7 Z06. At the April 29, 2022 Corvette Bash event at the National Corvette Museum, Corvette Product Planner, Harlan Charles made it perfectly clear when he said, “The C8 Z06 is a race car that you can drive on the street.” END_OF_DOCUMENT_TOKEN_TO_BE_REPLACED 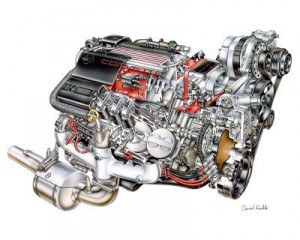 When the Cadillac-derived Small-block Chevy engine first arrived in 1955, I’m certain that Ed Cole and his team of Chevrolet engineers never imagined that their efforts would have such a profound and long lasting impact on the automobile industry. The little 265-cubic-inch engine had just 162-horsepower. By 1970 the 350-cubic-inch LT-1 engine was packing 370 gross horsepower. Beginning in 1973 Gm started rating their engines in “net” figures making it look as if the legs had been cut out from under all of their motors. While it’s true that there were emissions restrictions and reduced compression, the “net” power ratings were in real-world terms, closer to reality. From ‘73 to ‘96 it was a long slow slog, but the last SBC to use the basic original design was the 330-horsepower LT4. So, what would be the ”gross” horsepower rating of a ‘96 LT4? That would be anyone’s guess, but somewhere close to or over 400-horsepower would be a good guess.

Since Spring ‘11 I have been asking the question in my Illustrated Corvette Series VETTE Magazine column, “What’s the best _____?” for each generation Corvette. ICS No. 174 takes a look at the 1996 LT4 Corvette and asks, is this “The Finished Classic SBC?” let’s get into the details. Talk about going out with a roar! Enjoy – Scott 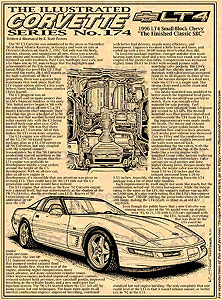 The ‘97 C5 Corvette was introduced to the press in November ‘96 at Road Atlanta Raceway, in Georgia and went on sale at Chevrolet dealers on March 7, 1997. Not only was the body, interior, chassis, and suspension all-new, there was a totally new engine and transaxle. The splash the new C5 created, followed up with roadsters, Pace Cars, hardtops, race cars, and a Le Mans win in ‘01, was so huge that the highlights and achievements of the C4s quickly faded. While the jewel-like LT-5 that powered the exotic ZR-1 still stands as the high watermark of the C4 generation, there was a quieter high watermark that took place. Had the LT4 engine option arrived a few years before, there would have been another Chevy legend.

The C5 program was an on-and-off-and-on again project due to GM’s financial troubles in the early ‘90s. Initial sorties began in ‘88 with the intention of an all-new C5 a ‘93 model. Corvette chief engineer, Dave McLellan was given a budget of $250 million, but that number turned into a roller coaster ride with the C5 being pushed back year after year. GM’s miracle of the ‘90s was that there even was a C5 Corvette. All of this makes the LT4 even more amazing. END_OF_DOCUMENT_TOKEN_TO_BE_REPLACED 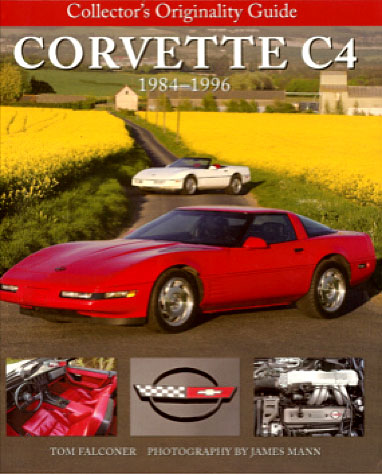 The introduction of the C4 Corvette in the Fall of ‘83 was a much anticipated automotive event. Times were tough through the ‘70s and no one anticipated in ‘68 that the new Mako Shark-inspired car would have a 15-model-year production run. And when you consider that the car was riding on a chassis designed in ‘60-’61 for the C2 Sting Ray, it’s all the more amazing that the late C3 cars set all-time sales records.

Just like all Corvettes from the beginning, the C4 was a car that was in constant evolution. Every year, Corvette Chief Engineer, Dave McLellan and his devoted crew of engineers and stylists made small improvements, with an occasional big leap forward. Little did we know when the C4 was first shown at the end of ‘83 that this Corvette generation would last almost as long as the C3 generation – 13 model years. END_OF_DOCUMENT_TOKEN_TO_BE_REPLACED