Check out our awesome slide show tribute to Larry Shinoda’s designs at the bottom of this post.

Larry Shinoda’s designs were so strong that when his name comes up, it’s almost always first associated with Corvettes. But Larry’s talent for designing fast-looking cars wasn’t limited to Corvettes. I suppose that when you are the go-to-stylist for a legend the likes of Bill Mitchell, you get a few peach projects. In retrospect, what helped make Shinoda’s design work so edgy was his passion for racing. In a sense, Larry’s NHRA Nationals win in ‘55 put him in the same category as 1954 Le Mans racer Zora Arkus-Duntov. As Bill Mitchell used to say, both men had, “gasoline in their veins.” 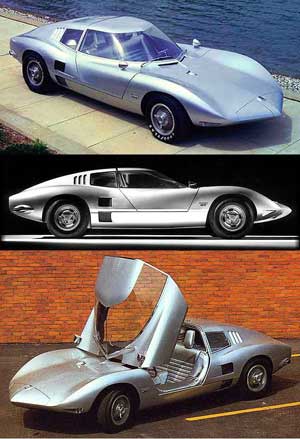 Although the Corvair never really caught on as a performance car or a sports car, designers such as Shinoda had some jaw-dropping ideas for Chevy’s rear-engine car. The 1962 Monza GT Coupe was in direct competition with Ford’s mid-engine 4-banger Mustang I concept car. What an interesting Chevy vs Ford battle that would have been! When you work in an R&D department often many “variations on a theme” are explored.

The Monza SS was an open cockpit-type design with a racer-like cut-down windshield. Another version was explored with a more traditional type of windshield. And in the same way that other GM divisions glommed on to Harley Earl’s Corvette concept in ‘53 and came up with their own “Corvette” concept cars for the ‘54 GM Motorama (the ‘54 Pontiac Bonneville, Buick Wildcat, and Olds F88). We have an example of a Monza variation that looks a lot like a roadster version of the 1964 XP-833 Pontiac Banshee. It was very common back then for designs to get tossed about within GMs divisions.

One Shinoda design that was not shared by any of GM’s other divisions was the 1967 Astro I. Corvair production peeked in ‘65 for approximately 235,000 Corvairs built. By ‘67 the number went to just over 27,000! The Corvair-based Astro I concept/show car arrived in 1967 and was probably started around ‘65 – ‘66, before the car started to tank. Unlike the Monza GT that eventually became the ‘67 Opel GT, the Astro I was so over the top, none of its design elements were used in any serious fashion. Instead, Chevrolet used the “Astro” name on one of their full-size vans and there was nothing “Astro” about it. END_OF_DOCUMENT_TOKEN_TO_BE_REPLACED

Hot rodder Shinoda teams up with Bill Mitchell and defined the “Corvette look.” 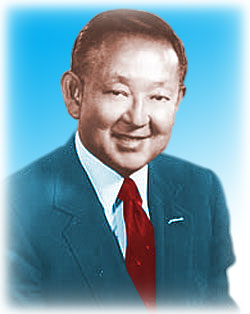 Perhaps it was “in the stars” that Larry Shinoda was in the right place at the right time. If you strictly look at Shinoda’s resume in 1956, you might ask, “How did this guy get in the front door?” As a young man, the only thing Larry ever graduated from was high school, Army boot camp, and the School of Hard Knocks. Twelve-year-old Larry had his life turned inside out when along with thousands of Japanese-Americans, he and his family were sent to interment camps for the duration of WW II. The experience had a profound effect on his personality. A self-professed “malcontent” Shinoda could be a little difficult to work with.

After his Army tour of duty in Korea, Shinoda attended Art Center School of Design in Los Angeles, but truly hated being there. He could see no purpose in taking the classes in design and the various art mediums, such as watercolor painting. He was a car guy/hot rodder and he wanted to draw and design cars! So he left Art Center without graduating and based strictly on his car illustrations, landed a job at Ford, then Studebaker/Packard. Just a year after starting his career, he landed a job as a designer at General Motors.

The rest is the stuff of legend. Street racing and blowing the doors off of Bill Mitchell’s souped up Buick and quickly being taken under Mitchell’s wing. Things like that happens, but rarely. There was obviously some chemistry between the two men, perhaps it was because both men could be brash and had strong opinions. 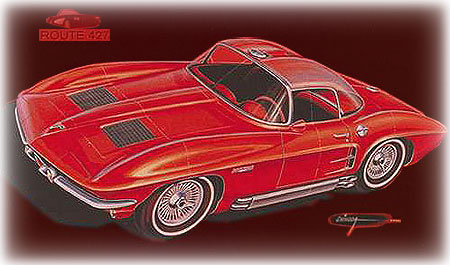 Shinoda got his first big break when Mitchell tapped the 28-year-old to translate the body design of the ‘57 Q-Corvette on to the mule chassis from Duntov’s aborted Corvette SS project. The finished car became Mitchell’s 1959 Stingray Racer, which formed the styling theme for the ‘63 Corvette. From there, Shinoda got one peach project after another. It’s worth noting that the design of the Stingray Racer is held in such high esteem that current Corvette chief designer, Tom Peters (C6 Corvette and late model Camaro designer) is on record stating that his ‘09 Corvette Stingray Concept (aka Transformers Corvette) was influenced by the ‘59 Stingray. END_OF_DOCUMENT_TOKEN_TO_BE_REPLACED

As you are watching, keep in mind that the shape of the car was worked out almost 50 years ago! And it still is dripping with sexitude. END_OF_DOCUMENT_TOKEN_TO_BE_REPLACED

The Motherload of Maco Corvette Photos!

Our Mako Shark Attack Week was a big hit (LOTS of visitors) and got the attention of what may well be two of the biggest Maco Shark fans out there in cyberland. The other day we had a brief note from Robert Egli complimenting one of the Mako Shark posts from our “Mako Shark Attack Week.” He wrote, “For more photos of Mako Sharks just check out the gallery above.” So I went to the link and WOW! I didn’t count the number of pictures Robert has on the page, but I spent at least an hour carefully looking over the collection of images. The cars range from stunning to junkyard specials, which is fairly typical of kit cars. To visit the Maco Gallery, CLICK HERE. END_OF_DOCUMENT_TOKEN_TO_BE_REPLACED 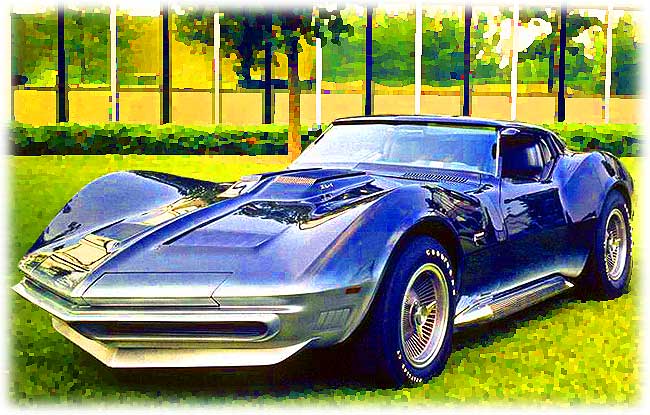 Perhaps the most unfortunate part of the whole Mako Shark-II story is the fact that the configuration of the the running Mako Shark-II is gone! When Mitchell decided to try out a few more design elements for the Shark Corvette, the quickest way to get there was to start with the ‘66 running Mako Shark-II. The running Mako Shark-II was a stunningly beautiful car, so can you imagine what it might have been like for the designers and builders that were tasked with the job of CUTTING THE CAR UP to make the Manta Ray? Oh, that first cut must have been painful! It must have felt like sacrilege taking a zip saw to such a beauty. END_OF_DOCUMENT_TOKEN_TO_BE_REPLACED

Dateline: 8.13.11
Take a trip in the CorvetteReport Time Machine back to 1973 for a look-see at what could have been the first mid-engine production Corvette!

With all the chitter-chatter in the C7 Corvette rumor mill about a possible mid-engine Corvette, we thought it would be fun to take a trip back to 1973 for a look at what many thought would be the replacement for the C3 Mako Shark-styled Corvette. Corvette chief of engineering, Zora Arkus-Duntov had been pitching the mid-engine layout since the 1960 CERV I car. Not only was the AeroVette a mid-engine layout, it was to be powered by a 420-horsepower, 4-rotor Wankel rotor-motor engine. GM had licensing rights to develop the radical rotary engine that seemed to have a lot of potential.

In ‘73 there were two, rotary engine-powered Corvette prototypes. The XP-892 used a 2-rotor engine and had a body designed by Pininfarina. While it was a nice-looking car, it really didn’t shout, “CORVETTE!” The 4-rotor car was built on the chassis platform of a previous 1970 experimental Corvette that was simply known as the XP-882. The 4-rotor car definitely screamed, “CORVETTE!” END_OF_DOCUMENT_TOKEN_TO_BE_REPLACED