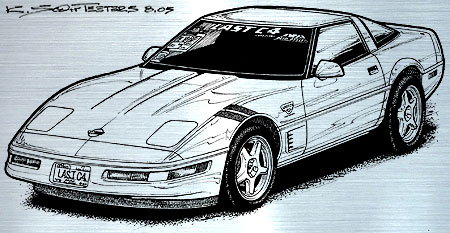 Corvette people are brilliant. Mike Yeager of Mid America Motorworks came up with a novel idea. While most collectors think of ” special editions” and “firsts,” Mike thought of the “last” C4 Corvette off the production line. No one had ever considered that before. Here’s food for thought – imagine how valuable the last production line C1, C2, and C3 Corvettes would be today. Mike must have been thinking along that line when he approached Chevrolet with his unique proposal.

As the ’90s progressed, the rumors of a replacement for the aging Corvette began to build. When GM announced in mid-’95 that the ’96 model would be the last of the C4 Corvettes, Yeager launched his plan. Mike leveraged his relationship with Chevrolet with a unique proposal. Yeager’s request was to be permitted to buy the very last Corvette to roll off the production line, on the condition that the he would retain ownership of the car and display it at his “MY Garage” (Mike Yeager Garage). Mike has an impressive collection Corvettes and other cars. GM liked the proposal, had nothing to lose, and a lot of publicity to gain. So a deal was struck and Mike began his plans to make the “Last C4” a very special car.

Yeager decided that the Last C4 should be visually unique. In honor of the first Corvette, he chose polo white as the body color. From there he added the Grand Sport rear fender flares, white ZR-1 wheels, red Grand Sport front fender hash marks, special embroidery for the seats, and special “Last C4” decals for the front fenders and the windshield. Under the hood was a standard LT1 engine and an automatic transmission. The overall look was clean and unique. END_OF_DOCUMENT_TOKEN_TO_BE_REPLACED

Being the general manager of a GM division is hard work, but it sure had its perks!

(Slide show at the bottom of this post)
Back on October 2, 2011 we told you about what would have been Semon “Bunkie” Knudsen’s  99th birthday. I don’t know if the GM Design Center still does customs, but back in the glory days, one of the perks of being an executive was that you could get a GM car built just for you. I don’t know if the executives actually “designed” their cars or if the GM Design Center guys just “had at it.” (Okay Mr. Knudsen, what color would you like?”) It’s an interesting and very overlooked part of GM’s history. What’s not overlooked is when these cars go on the auction block or are on display at shows.

Kundsen’s GM-customized ‘64 Corvette coupe is now part of Mike Yeager’s Mid America Motorworks “MY Garage” collection of cars, and will be on display at the Mid America booth (#24297) at the 2011 SEMA Show, November 1-4, 2011, in Vas Vegas. (Yes, you can sing a little “Viva Las Vegas” if you have to) Mid America is showing the Knudsen Corvette to showcase their ability to expertly replicate parts for specialty cars through their Performance Choice services.