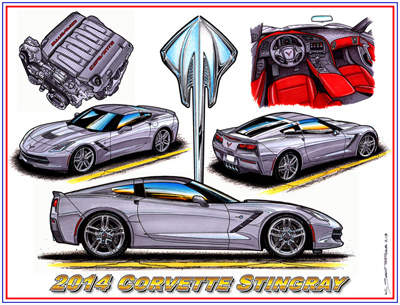 After what was without a doubt the longest, most tortuous buildup for a new generation Corvette ever, Chevrolet finally unleashed the 2014 C7 Corvette at the Detroit Auto Show on January 13, 2013. It was exhausting and I thought that Tadge Juechter, Tom Peters, and Ed Welburn would never stop talking. Finally, in a “TA-DA!” style, the red C7 came up and over a ramp, making it look like the car leapt on stage. It turned out that the spy photos and computer generated illustrations were close… but not quite on the mark. No, what we saw was better. But, I expected this, as the same thing happened before the C6 arrived – only we weren’t all on the torture rack for months on end.

This was the fifth new generation Corvette arrival I have seen, and it’s never easy. The ‘68 C3 wasn’t “Mako Shark” enough for many. The ‘84 C4 seemed too straight-lined and slab-like. The ‘97 C5 was called “too round” by some. The ‘05 C6 seemed like a crisped up C5 and was deemed a “C5.5” by a few. When it comes to Corvettes, you just can’t make everyone happy. However, each new generation, except for the C3, dished up stacks of impressive mechanical improvements, each taking the new generation to a new and higher level of performance. END_OF_DOCUMENT_TOKEN_TO_BE_REPLACED