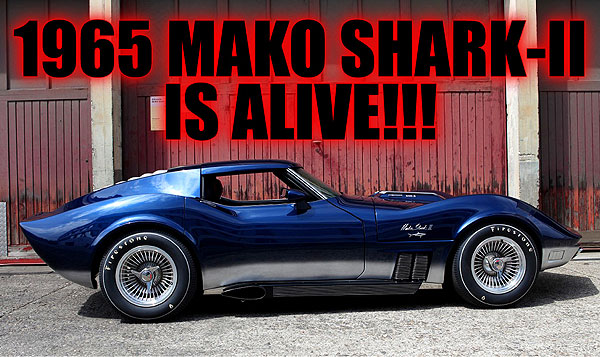 END_OF_DOCUMENT_TOKEN_TO_BE_REPLACED

Bill Mitchell’s Mako Shark II Corvette show car is arguably THE most important Corvette concept car ever! This car literally changed everything the Corvette had ever been in terms of styling. The design was so fresh, new, original, dynamic, and dripping with sex, it just HAD TO BE the next Corvette. Oh, how I wish I could have been in the GM styling review yard in March 1965 when Mitchell and his team rolled the nonfunctioning Make Shark II out for review to GM’s upper management. Too bad it wasn’t filmed. Management was so blown away they wanted it as the next production Corvette in ‘67!

After some name swapping, the ‘61 Shark show car was renamed Mako Shark I and the new design was named Mako Shark II. new die-cast badges were quickly made, and the new Mako Shark II was shipped off to the 9th International Automobile Show in New York City for its public debut. Believe it or not, the non-running, full-size show model cost GM nearly $3 Million! The crowd also got to see Chevrolet’s all-new 386 big-block engine under the tilt-forward nose of the Mako Shark. Next stop was the New York World’s Fair to the GM pavilion. What a heady time for Corvette lovers.

Meanwhile, back at Chevrolet, the hard work had already begun. It was a case of exuberance vs reality. Management wanted the new Shark as the ‘67 Corvette, after all, it was just a new body and interior, so how hard could that be, right? it turned out to be more challenging than the suits realized and soon the release date was pushed back to 1968. Even with an extra year, it was still a rushed design, as it was soon discovered END_OF_DOCUMENT_TOKEN_TO_BE_REPLACED