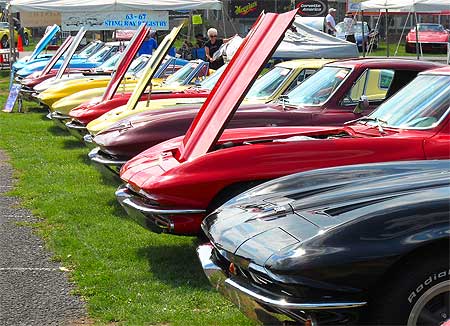 Yesterday we showed you some of the C3 Shark Corvettes from the 2011 Corvettes at Carlisle Show. We attended on friday and it was a good thing because I read on keith Cornett’s CorvetteBlogger.com that overcast skies on Saturday have vendors packing by noon time. Hurricanes seldom blow up the east coast the way that Irene did, what’a shame it had to be that weekend.

While the 1965 Mako Shark II show car was a total game-changer for Corvette styling, back then no one was saying, “Gee, don’t you think the Sting Ray is looking a little tired?” NEVER HAPPENED. I’ve often wondered what the Corvette would look like today had the shark styling had not happened and the Sting Ray design was allowed to develop and mature, the same way the 911 Porsche did over the years. Today’s 911 Porsche still has the basic look from when the car first arrived as a 1965 model.

While Chevrolet stylist Larry Shinoda is generally credited for designing the Sting Ray, Larry’s work began where the Q-Corvette ended. In 1957 Ed Cole, the lead designer on the small-block Chevy engine was no the general manager of Chevrolet and wanted to leave his mark on future Chevrolets by reengineering the entire line up of Chevy cars with transaxles so that the interiors could all be opened up with the elimination of the big transmission hump. The larger project was called the “Q-Chevrolets” and the “Q-Corvette” was just one can in the line. The Q-Chevrolets were supposed to be introduced by 1960, but after the numbers were crunched, the entire project was canceled.

Bill Mitchell took the opportunity to make the Corvette his own. He liked the look of the Pininfarina and Boano body designs on the Italian Abarth cars. The strong horizontal crease and fender humps were borrowed from the Italian cars. The structure of the Q-Corvette had a hoop/roll bar behind the driver’s seat. This allowed the car to have lift-out roof panels and the absence of an a-pillar for the windshield. Stylists Bob Veryzer and Pete Brock worked under Mitchell’s direction, with the help of END_OF_DOCUMENT_TOKEN_TO_BE_REPLACED