Work continues on our new prints enterprise. In April 2012 we partnered with Fine Art America so that our Corvette art print customers could enjoy the many options afforded by FAA. Our latest offering, “Corvette Box of Candies” came as a happy result of working on our horizontal and vertical layouts of the Corvette Special Editions and Corvette Indy 500 Pace Cars layouts.

After I completed the graphics for the Special Editions and Pace Cars, it occurred to me that if I put them all on one layout, they’d look like a box of brightly colored, pretty, hard candies. You know those bright-colored, sweet, hard candies you often see in the display cases at Hallmark Card shops. Corvettes in the layout include all of the Special Edition Corvettes from the 1978 25 Anniversary Corvette to the 2011 Carbon Edition Z06, and Corvette Indy 500 Pace Cars from 1978 to 2008. So I ran the idea by the boss and she said, “Make it so, Dude!” So, the Dude, got’r done! END_OF_DOCUMENT_TOKEN_TO_BE_REPLACED 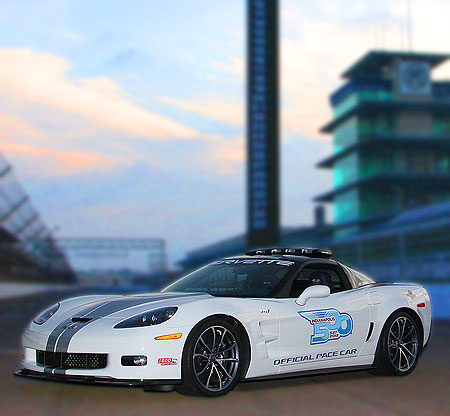 Every so often, a real bombshell goes off. Earlier this week, less than three weeks before the 2012 Indy 500 race, Chevrolet announced that a 2013 60th Anniversary ZR1 Corvette would pace the 96th Indy 500 race. This will the the 11th time a Corvette paces the Greatest Spectacle in Motorsports and the 23rd time a Chevrolet automobile has paced the Indy 500. No other manufacturer has paced Indy more times. And, if that’s not enough, 2012 marks the return of Chevrolet as an engine supplier for IZOD IndyCar Series.

C6 Corvettes have paced the Indy 500 in 2005, 2006, 2007, and 2008, but this is the first time the 638-horsepower ZR1 will do the job. The ZR1 is also the most powerful car to ever pace the Indy 500. And just like most of the previous Corvette Indy pace cars, the Corvete needed no performance enhancements – just the addition of various safety requirements.

Arguably, the only bummer part of the story is for Corvette collectors. There was no announcement of an optional Pace Car Special. The livery on the ZR1 Pace Car consists of the production 60th Anniversary decoration, with the addition of the 2012 Indy 500 logo, “Official Pace Car”, Indy 500 logo,  “CORVETTE” across the top of the windshield, and the safety strobe light bar on top of the B-pillar. The ZR1’s astonishing hardware aside, this is the tamest-looking Corvette Indy 500 pace car we’ve seen since 1986. But, we’re NOT complaining. END_OF_DOCUMENT_TOKEN_TO_BE_REPLACED

For their third go for the 1995 Indy 500 Corvette, product planners decided to let the designers have at it! 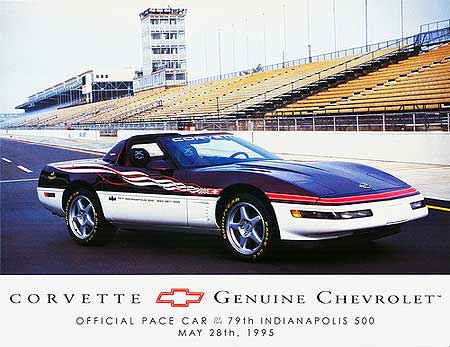 Corvettes have paced the Indy 500 11 times and there have been six Corvette Pace Car replicas offered since 1978. When you look back at the cars in chronological order, there’s an interesting progression. The ‘78 Corvette Pace Car was very stately with its black and silver paint with thin red pin stripping. It was very much of a muscle car-type decoration. The ‘86 Corvette Indy Pace Car couldn’t have been more understated – yellow with lettering on the door. That’s it. Chevrolet hadn’t yet embraced the possibilities of a Corvette Pace Car option and basically wanted to avoid the angst the ‘78 car caused.

But by the time the ‘95 Corvette Indy Pace Car arrived, it was obvious that management let the designers have at it. These cars have to be seen in the daylight to be appreciated. The dark purple metallic paint on the upper portion looks like a lollipop. I don’t know the designer that came up with this design, but BRAVO! Since ‘95 Corvette Indy 500 Pace Cars have been, shall we say, brash, with the exception of the silver & black ‘08 Indy 500 Corvette Pace Car, which was a salute to the first 1978 Indy 500 Corvette Pace Car. END_OF_DOCUMENT_TOKEN_TO_BE_REPLACED