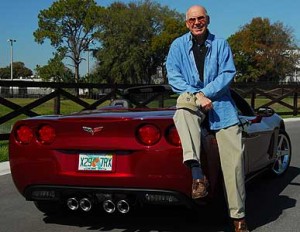 Go to the magazine stand and the number of car magazines is amazing. But way back in the ‘60s, most of the car magazines were west coast publications. CARS Magazine was one of the only east coast car magazines that included road tests, feature cars, and race event coverage. When muscle cars party were hot in the late ‘60s, CARS editor, Marty Schorr was right on top of the east coast muscle car and specialty car scene – especially the Baldwin-Motion Phase III Supercars of Joel Rosen. Talk about muscle cars with attitude! Every Phase III Chevy was carefully built under Rosen’s supervision and was guaranteed to run 12.5 in the quarter mile.

By ‘71 the muscle car party was over and we all adjusted to somewhat bland cars. The only “performance” cars that survived were the Z-28, the Trans-Am, and the Corvette. By ‘76 I had been into Corvettes for 12 years and regularly scoured the magazine stands for special “Corvette editions” magazines. One day I saw “VETTE Quarterly.” Finally, a Corvette-only magazine! Marty Schorr from CARS was the editor, so I knew this was going to be a fun publication. The magazine was so cool I wrote a letter with some article ideas, along with some samples of my art, and sent it off to Marty. A week later, I was on board with VETTE.

VETTE Quarterly went bi-monthly in ‘78, was retitled, “VETTE” and eventually became a monthly magazine in 1980. When CSK Publishing bought the title, Schorr stepped out of the editor’s chair and was for many years a contributing editor. Marty started his own automotive PR company, PMPR, Inc. and I went on to become a commercial artist, toy designer, and artist/writer for VETTE and many other car magazines.

In ‘07 I reconnected with Marty when I was researching the Astoria-Chas L-88 ‘67 Corvette drag car. We kept in touch and I thought that it was time to get Marty’s story out to today’s VETTE readers. Last December, we talked for three hours about Marty’s career in the automotive publication business, and yes, Corvettes. – Scott 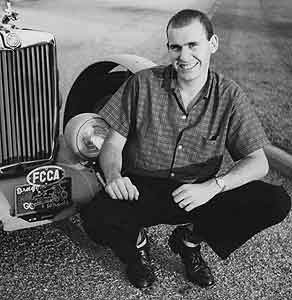 ST – Marty, it sounds like a cliché, but, how did you get started in this crazy business?

MS – I was just a kid in Yonkers, New York in the mid-’50s when I joined a local hot rod club, the “Dragon Wheels.” I wasn’t a mechanic or mechanically inclined, but it was a lot of fun to be around. We had all kinds of homemade hot rods. One guy had a fuel dragster and another had a fuel coupe. There weren’t any race tracks around, so we used to race the cars on a section of the Bronx River Parkway late at night. A lot of the guys got nailed by the cops with early versions of radar. Back then, if you ran away, the cops would shoot at you! It wasn’t uncommon to see club cars with bullet holes in the back of the car! I wasn’t much of a mechanic, but I could write pretty well and soon became the club’s PR director. I had a little 620 Browie camera and got my first article published in ‘57 about our club’s Cadillac-powered dragster in a small digest-size magazine. I got paid $25 and said to myself, “I LIKE this!” I kept practicing my photography and writing skills, eventually landing a job as an editor for $100 a week.

ST – Marty, most publications these days require an editor to have a degree in English or journalism. What kind of formal education did you have?

MS – I didn’t have the means to go to school full-time, so I took night classes for about five years in English, advertising, and public relations. I didn’t finish college and never got a degree because my freelance career really took off. My career paralleled a guy from my school that graduated two years before me, Ralph Loren. We didn’t know one another or travel in the same circles. 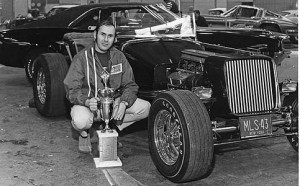 ST – And what kinds of cars were you driving back then Marty?

MS – Let’s see, I had a ‘51 Pontiac, a ‘40 Mercury, and a ‘32 Chevy Cabriolet. My hot ride was a little MGTA with a flathead Ford V8 and a four-speed trans. It had been converted to left-hand drive and had the big 19-inch wire wheels, no side windows or top, and I drove it all year around while I was freelancing. It was quick, but it handled terribly, had awful brakes, and the wire wheels had to constantly be realigned. I was always taking the car to a Rolls Royce dealer because they had mechanics that knew how to fix wire wheels. (I’ll be they loved having that car in for service. ST)

ST – Back in those days Marty, all young men had to do military service, unless you got a deferment or were classified 4F. What did you do for Uncle Sam?

MS – I was actually in the Army two times. I enlisted for six months of active duty, plus 100 years of reserve. After boot camp I was in the transportation corps as a non-officer and eventually got into the photography lab and did a lot of documentation photography. It was great experience that I applied to my freelance journalist work for small car magazines. After my six month stint I got called back because of the ‘61 Berlin crisis. I didn’t get to do anything interesting, but while stationed in Virginia, my wife and I were renting a place and one of our neighbors was astronaut Alan Shepherd. So I worked my Army job during the week and was shooting cars and doing stories on the weekends. END_OF_DOCUMENT_TOKEN_TO_BE_REPLACED