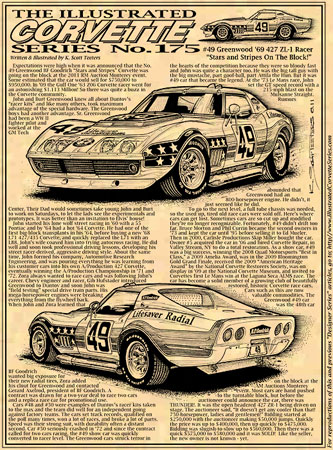 (Check out the Greenwood video at the bottom of this post!)

It was early last July that Kevin Mackay of Corvette Repair sent me a link to the RM Auctions online version of their Monterey Auction Catalog. Kevin and I have had many conversations about early Corvette race cars, so he knows that I’m a big fan. Any time a Greenwood Corvette goes on the block it’s big news, so I posted a story about the auction right away. For the next 6 weeks or so, the car magazine and Corvette blogs were on fire in anticipation of the auction. RM Auctions broadcasts their auctions online, so I stayed up and watched the coverage and sale of the Greenwood ZL-1. I have to admit, it was a lot of fun. Here’s the post of the auction coverage.

Since the car has so much historical importance, I decided to cover the car in my VETTE Magazine monthly column, “The Illustrated Corvette Series.” The January 2012 issue of VETTE just came out, so I’m sharing the story and art with you below. Enjoy! – Scott

Expectations were high when it was announced that the No. 49 Greenwood BF Goodrich “Stars and Stripes” Corvette was going on the block at the 2011 RM Auction Monterey event. Some estimated that the car would sell for $750,000 to $950,000. In ‘09 the Gulf One ‘63 Z06 Corvette racer went for an astonishing $1.113 Million! So there was quite a buzz in the Corvette community.

John and Burt Greenwood knew all about Duntov’s “racer kits” and like many others, took maximum advantage of the special hardware. The Greenwood boys had another advantage. Sr. Greenwood had been a WW II fighter pilot and worked at the GM Tech Center. Their Dad would sometimes take young John and Burt to work on Saturdays, to let the lads see the experimentals and prototypes. It was better than an invitation to Elvis’ house! END_OF_DOCUMENT_TOKEN_TO_BE_REPLACED